Something very old fashioned is happening in LA.

It would be safe to say that Hollywood was built on the art of storytelling. Every script, every character, every hit starts with a great story. But when was the last time you heard a great story out loud, told to you? Sure, we hear them at the bar or maybe we even occasionally catch a charismatic storyteller in his element at a friend's dinner party.

But thanks to The Moth, storytelling is about to have resurgence in the City of Angels. We're talking good, old-fashioned, sit down and shut up, silence-your-cell phone-kind-of-storytelling and HuffPost LA can't wait.

But don't be fooled. The Moth isn't anything new. It began fifteen years ago on St. Simon Island, Georgia -- friends getting together to tell some great stories aloud. They started calling themselves "the moths" because the storytellers noticed that real moths were always trying to get into the porches where they told their stories. The Moth moved to The Big Apple and it became apparent that people seemed to talk in sound bites; no one took the time to stop and tell meaningful stories from their lives. The group of moths wanted to recreate the feeling of summertime in Georgia on the porch and they invited 100 friends to a small bar.

It is fifteen years later and nearly every Moth show has sold out -- even from day one.

Catherine Burns, The Moth's artistic director, has been with the organization for ten years. She puts it simply, "Our philosophy is to keep shows intimate."

THE TOUGHEST TICKET IN TOWN
The Moth is very simple. It's an evening of storytelling. There are no graphics or speeches. It is quite simply great storytellers speaking live to an audience and it has become a staple of New York City culture. There are 10 main shows a year (called 'mainstages') where five storytellers perform in the evening. No notes are allowed on stage, but the stories are curated and directed by The Moth. Storytellers have about twelve minutes to tell their true story. To keep it in perspective, of the ten mainstages a year, seven are in venues for 300 or less people.

The smaller shows sell out very quickly. When asked how to get in, Burns laughed, "it's the toughest ticket in town. You have to be on top of it to get into The Moth." Some are on mailing lists and buy tickets the moment a show is announced, others pay an annual fee of $125 to be on an advanced list. And like LA, surely it's sometimes about who you know.

THE SELECTION PROCESS
"The majority of Moth stories come to us in three ways," Catherine Burns reveals. "Word of mouth, The Moth Slams, or the pitch line." Many people reach out to the directors at The Moth and say they have a friend who just told an incredible story. Other times, the directors find great stories or great storytellers at The Moth Slam -- which is a more open-mic kind of night. Storytellers drop their names in a hat and ten are selected for the evening. Those ten people have five minutes to tell their story. The pitch line is something The Moth created after receiving a grant years ago. People call in from all around the country and pitch their stories in about three minutes.

"Once we have found our storytellers, we encourage them to memorize their first and last lines -- to know where to start and finish," says Burns. "Then we work with them. We map out the beats of the story and start having them practice so that they don't add anything in that will make it too long or leave out a key detail that will make the audience confused." When asked what the longest amount of time is that she has worked on one story, Burns laughed and said, "17 hours. The storyteller was a recently exonerated prisoner and he kept forgetting to tell the part where they let him out of jail!"

GENIUSES
The Moth was just awarded the MacArthur Grant for Creative and Effective Institutions, which is their equivalent of the MacArthur Genius Grant but for 10-15 nonprofit organizations. The Moth was awarded $750,000 and was the only artistic group out of 15 that won this year. "I literally sat down in my baby's room and wept when we got the call," Burns said. "It's a game changer. It changes your life."

Part of that chunk of money will be put towards restoring The Moth's massive archive. There are 15 years of recorded stories that will now be digitized (two years ago, this process would have cost $1.5 million. Now, because of changes in technology, it will cost only $150,000). Another large chunk of money will go towards making The Moth Radio Hour a weekly show. Right now there are only ten episodes a year on the radio (in LA, The Moth is supported by KCRW and KPCC).

LOVING LOS ANGELES
In the early 2000s, The Moth began touring and did two shows in LA but eventually stopped because it was hard to break even. In 2006, they launched their first national tour and kicked it off at UCLA's Royce Hall. In 2008, they did a 400-person show and have wanted to come back permanently ever since. Within the last year, The Moth is putting their money where their mouth is.

"LA is the most obvious place to do this outside of New York. It's such an intelligent city. A lot of people think of LA only as the movie business. But I find there's a real intelligent undercurrent here," Burns said. "We just felt like it was a town that could support a series."

And support a series we will. Starting in December 2012, The Moth will launch at least three mainstage shows a year.

As an unofficial welcome back to Los Angeles, The Moth put on their biggest show in years at UCLA's Royce Hall on Thursday night. It was sold out and buzzing with life. They brought in the big guns for this show – five storytellers who had already worked with The Moth before. "It's 1,700 people. You have to have some experience to get on that stage," Burns explained. The five storytellers included essayist Jenny Allen, surgeon Kodi Azari, author Jerry Stahl, comedic writer Brian Finkelstein and poker champion Annie Duke. Azari told the miraculous tale of doing the first hand transplant in the country; something he had worked 18 years for. He brought us into his skin for the moment when the Marine he operated on moved his thumb, his index finger and his pinky. Stahl told a Bukowski-esque drug induced tale of how he decided to get off heroin … by doing crack. And how he began to shoplift canned goods from Ralph's super market, only to put a dent in them and return them for cash. "It wasn’t exactly 'Goodfellas,' but you have to start somewhere," he said.

And this is the bottom line.

You might not think you’d be interested in a story from a world champion poker player or a man who volunteered at a suicide hotline for four years. But you're wrong. The trick here is knowing how brilliantly curated these shows are – how vetted and perfectly selected the stories are. The Moth does all the work for you. Now mark your calendars for December, and get ready to sit back and enjoy.

CHECK OUT PHOTOS FROM THE UCLA EVENT AND FROM OTHER MOTH PERFORMANCES:

PHOTO GALLERY
The Moth
Download
Calling all HuffPost superfans!
Sign up for membership to become a founding member and help shape HuffPost's next chapter
Join HuffPost

The Moth: Los Angeles Becomes The Newest Hub For Live Storytelling Events Brought To You By New York's The Moth
The Moth 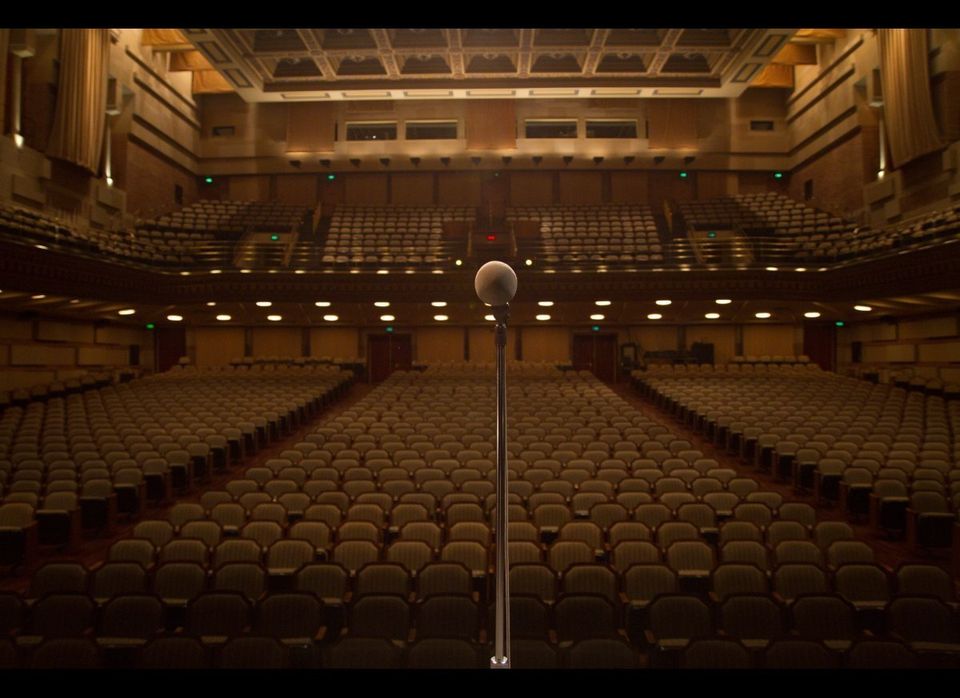