Mother's Day. I recall being a kid and feeling a little jealous that moms got their very own holiday (because kids are too dumb to realize the national children's holiday is just called "Life.") I wanted to be a part of that club who got to go through the dinner line first and unwrap gifts on a day that wasn't Christmas or my birthday. I just knew that once I became a mom, I would have it made in the shade every time the second Sunday of May rolled around.

Little did I know.

The advent of your first bumbling baby may give you the right to be celebrated on Mother's Day. But what most new moms don't realize is that there is a certain seniority at play. You aren't immediately granted a free pass to a day of complete leisure and pampering. That has to be earned through the ranks of what I like the call "The Hierarchy of Mother's Day."

You will probably get some nice jewelry from your husband, but just don't even think about putting "sleeping in" on your wish list, especially if you're nursing. Babies can't read the universal memo, RE: Mom is Off the Clock Today. And they usually pick Mother's Day as one of those "special" times when the touch, voice, glance or even presence of anyone but Mom induces whines, tantrums and neck clawing. So I hope you like that birthstone necklace. It's all you're getting this year.

Level 2: The Mom of Little People

Pinterest was invented for you. Keepsake plates decorated with your children's adorable artwork. Footprints immortalized in garden stones. Ornaments of your children's silhouettes. Jewelry charms made from precious fingerprints. Except YOU won't be the one getting these gifts, because, duh... dads don't do Pinterest. GRANDMA is going to be the lucky recipient of all these thoughtful and sentimental goodies. YOU will be the one busting your ass to get them all made while your kids try to shove quick-dry cement up their noses and stick their tongues out every time you try to snap a photo of their profiles. Then you get to dress the kids in their Sunday best (because again, duh, dads don't do fashion) and herd them all to church before heading over to the big extended family celebration with your pot luck side dish (because, you guessed it, dads and Pinterest). But don't worry. You are still going to have hella appreciation heaped upon you. Get ready for some pancakes with "secret" ingredients, construction paper cards with indecipherable writing, and glitter. Damn it.

Level 3: The Mom of Teens

During Level 2, you would have given your Target Redcard for everyone to leave the house for the day so you could have some uninterrupted peace and quiet. Now in Level 3, that's all you get... because everyone is apparently hanging out at Taylor's house breaking in her new pool table. Well, there was that text you got that says "HMD *heart emoticon, kissy face emoticon, taco emoticon.*"

Level 4: The Mom of Adult Children

Mother's Day is becoming a sweeter affair by now. Your kids make money of their own and can finally start giving you something that doesn't have a handprint on it. You may even get to be doubly celebrated as a mom AND and grandma, so there are bonus presents. But since your kids are likely busy being parents of tiny tots, working long hours, or just being self-absorbed d-bags (because there's always one), everyone still looks to you for "the plan." And it's just as well, since your own 83-year-old mother broke her hip when she tripped over a Lego castle the last time she was at your daughter's house, and she might catch any number of communicable diseases if the celebration is held at your son's bachelor pad.

You've made it to the only level of The Mother's Day Hierarchy where you don't have to lift one.damn.finger. Everyone owes YOU. The party's not at your house. You don't have cook a freakin' thing. You're first in line to eat. Good news: you are the Queen Supreme of all the Mothers. Bad news: that means your mom is dead.

Son of b. Looks like Mother's Day kind of sucks for everyone. 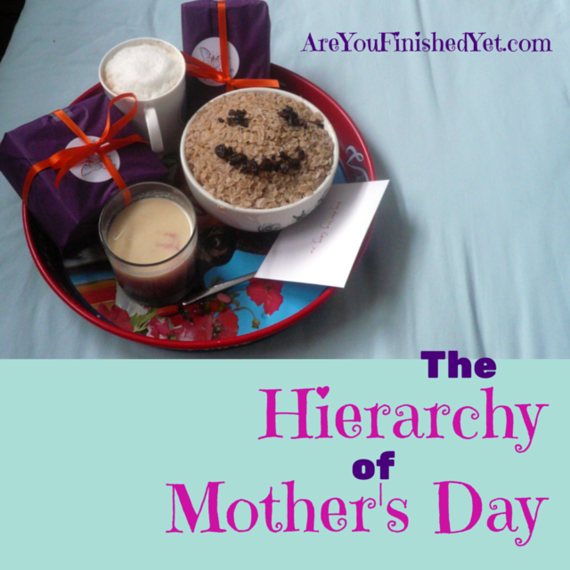