St. Helena - 'One of the most remote islands in the world.' Thus spake Wikipedia.

Well, its geographical position -- lost in the vastness of the South Atlantic, 1,200 miles from the coast of Africa and some 1,800 from South America -- is not about to change. But that little question of accessibility is. 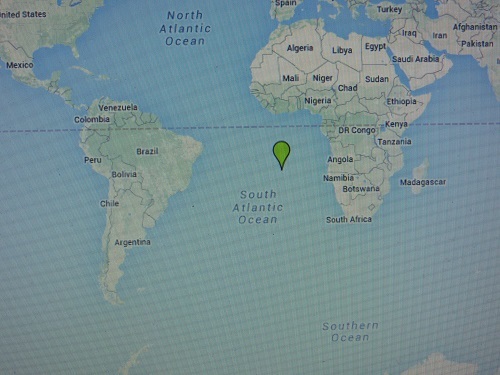 St. Helena in all its remote loneliness - Google maps

Until now reliant on the monthly-odd visits of the RMS St. Helena on her run from and to cape Town, South Africa, this tiny rock's terminal isolation is about to change forever in early 2016.

That is when the much delayed airport is to open, bringing this 47-square-mile speck within 10 hours or so of London, which governs this British Overseas Territory, best known for Napoleon Bonaparte's exile here. 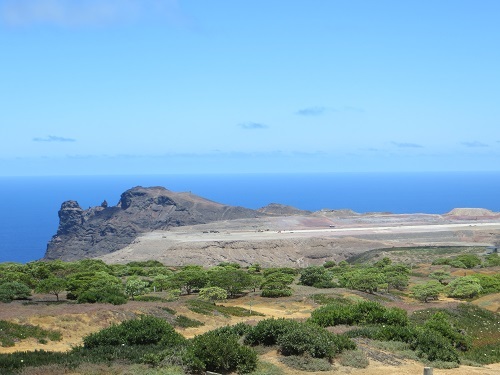 It will also take about the same time to get here from Paris, from where many a Frenchman, not to mention any remaining Bonapartists, may desire to embark on a pilgrimage to the final home and first resting place of L'Empereur.

Everybody agrees that the island will never be the same again but there is a general worry among St. Helena's 4,000 or so inhabitants over what the airport will bring - economic benefit if they get it right, or destruction of the laid-back island-easy way of life. 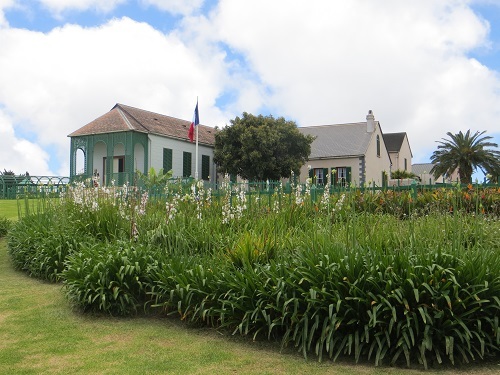 Airport opponents say the project was only approved in an island referendum a few years back because opponents weren't all that interested in getting themselves to the ballot box. 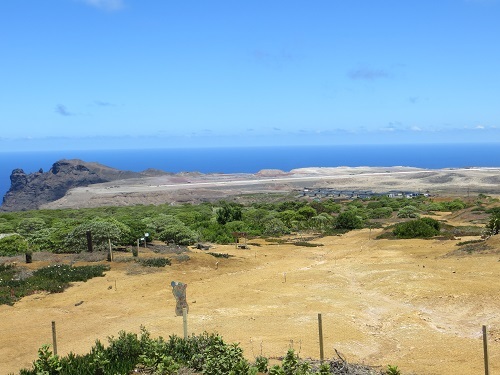 Tourism is now the great economic hope. But even if the airport opens on time at last, there are not nearly enough hotel rooms to cater for the hundreds of visitors envisaged under one plan for weekly flights from the UK, with only a few small hotels and B&Bs in Jamestown, the capital, and an inn in the countryside. 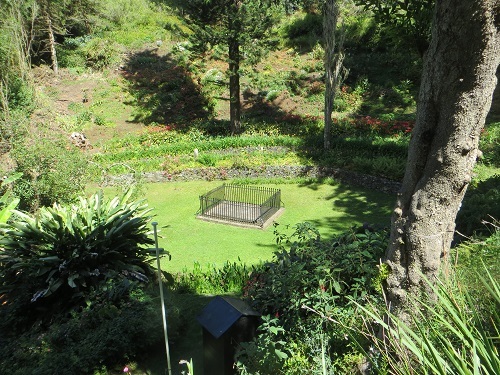 There are no clear plans for hotel building on the immediate horizon. The local government is seeking to make up for the lack of hotel rooms by planning to get three glorious Georgian buildings at the start of Main Street in Jamestown, right near the waterfront, to combine and divide up their gloriously large rooms into much smaller - and more cramped - accommodation. 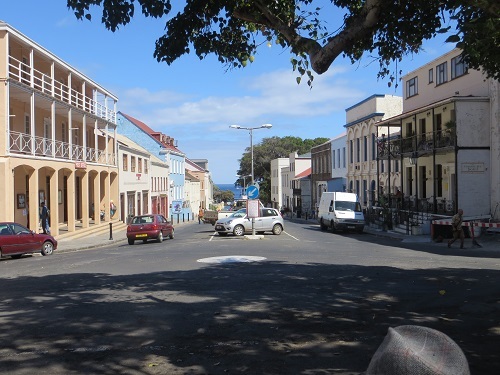 There are also plans to build a top-class hotel away from Jamestown in a beautiful setting at Broad Bottom Plain, where 3,000 South Africans from the Boer War were imprisoned from 1900 to 1902, but nothing has started there and it is not clear whether investors will go through with the project. 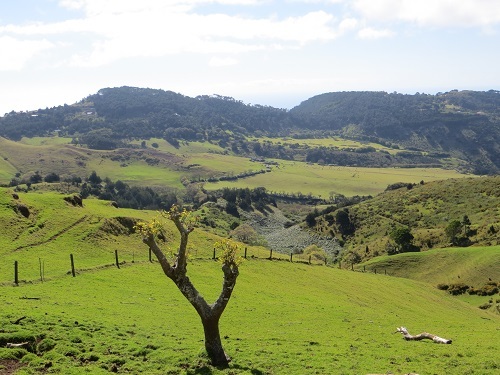 In the view of some expats here and even some Saints, as the Saint Helenians are known, the locals are not all that interested in providing the top-notch hands-on services that visitors might expect and that are needed to lure them.

Nor have any contracts yet been signed for any airline or tour company to fly in here, let alone is there any agreed clarity on just how many tourists might turn up, whether in the hundreds, thousands or tens of thousands, to give the island the economic jolt it needs. 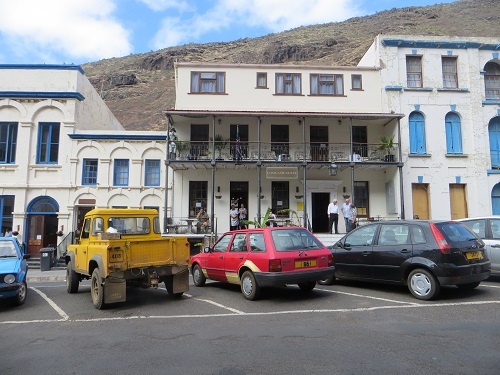 The Consulate, one of Jamestown's small hotels

A recent column in The Independent, one of the island's two weekly newspapers, noted snarkily:

'Normally it is the British Government who screw everything up by listening to some hair brained expert, whom they have sent out to the island with a half-baked brief, to offer a plan which, whilst looking caring and benevolent to the rest of the world, would enable them to spend some Aid Money in a British Territory at the least possible cost to the Exchequer, or to their future.

'For instance, I heard that some idiot had stated that 60,000 well-heeled visitors would come to the island every year. Thank the Lord some other noodle entered the fray with a more believable 30,000, but as far as I am concerned, even that is way, way out. I'm afraid like an aircraft these high flyers must come down to earth and, as Americans would say, 'Smell the coffee!' 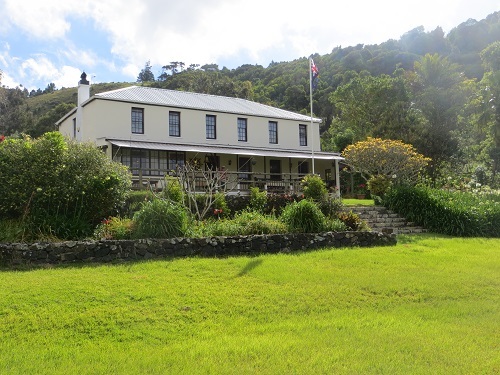 Out of town accommodation at the small Farm Lodge

The columnist is doubtless right about the idiots and noodles serving in Her Britannic Majesty's government, but that's a bit harsh about the 'the least possible cost to the Exchequer.'

I mean the bloody airport's costing 218 million pounds. I mean that's about $340 US.

Nevertheless scepticism is rife here. 'I'll be pushing up daisies by the time they get it right,' quoths one local lady.

Anyway, let's take a trip down to the site at Prosperous Bay Plain, organized by the airport's builders, Basil Read of South Africa. Yours Truly is looking particularly cute this afternoon, all tarted up in a white hard hat and fluorescent yellow pinafore or whatever you call the damned thing. 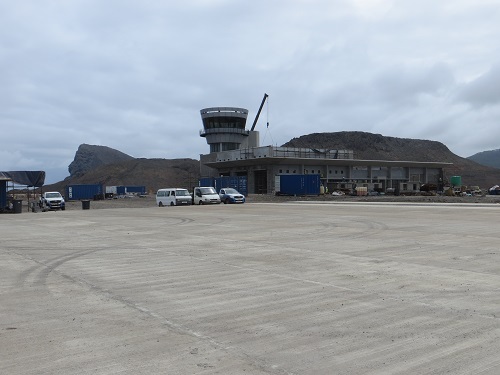 It's quite a feat of engineering. There was a 300-foot deep valley at the start of the nearest piece of more or less level ground they could find. This has now been filled in with nearly 8 million cubic metres of landfill to provide a total 1,950-metre long runway, suitable for Boeing 737-700W or similar aircraft. 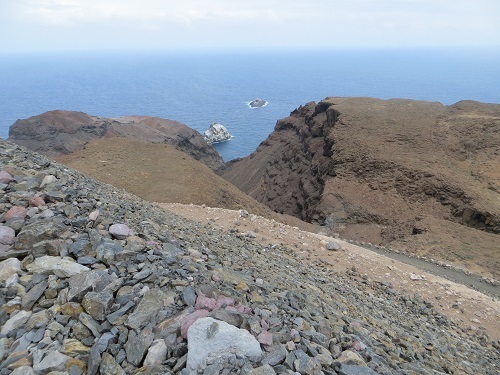 Part of the filled-in valley 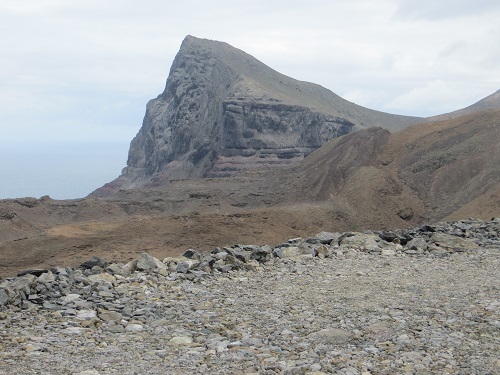 Another view
Much of the runway is already laid, the control tower has already been built, the two-storey terminal is under construction, and the first passenger plane is due in by April, 2016. 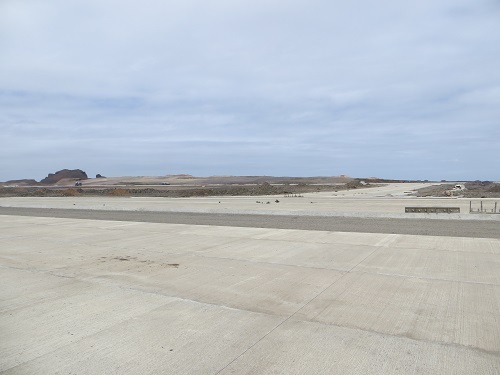 The apron and runway
It remains to be seen from where. London? Cape Town? Paris? Nobody yet knows. Package tourism? High end visitors? At the moment there's no real infrastructure for either. 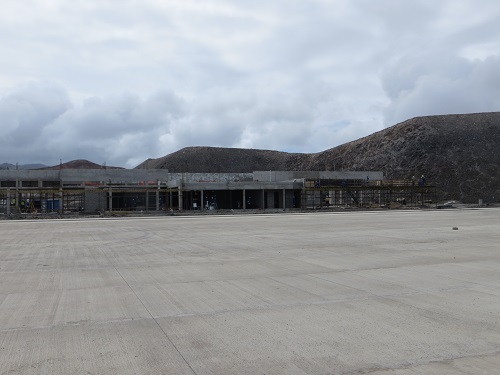 Meanwhile, with the airport still in the future, I'm faced with my own departure. On day 14 of my stay on this remote speck a long blast of a horn announces that RMS St. Helena has returned from Cape Town. 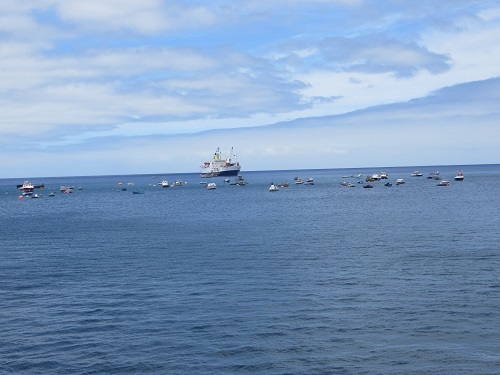 It will be another two days before she unloads all her cargo, reloads and is ready for the two-day trip on to Ascension Island.

By mid-morning of day 16, I'm clambering up the ship's side on the rock 'n' rolling ladder from the lighter. First call on board, even before my cabin, is the doctor's surgery for my anti-seasickness injection to avoid an encore of the disastrous puke-omania of my journey out. 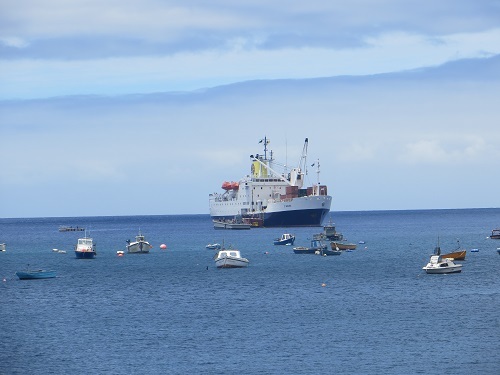 This time I'm also not at the Captain's Table. See if I care. I won't bother to put on suit trousers and a proper shirt tonight. Jeans and T-shirt it will be, Your Captainship.

They've finished unloading and re-loading everything from soap powder to SUVs, RMS gives three long blasts on her horn, and we're on our way.

The enchanted isle - stark, rugged, majestic - slowly disappears into a grey-blue haze on the horizon. 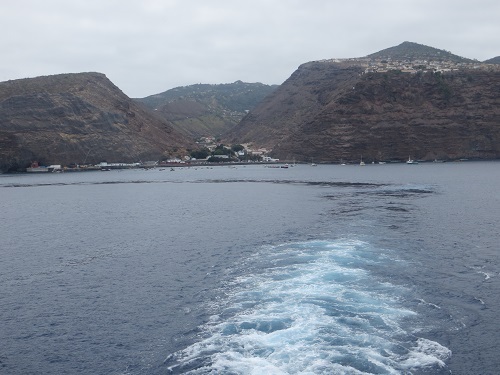 Farewell, St. Helena
The ship's loudspeakers are blasting out what sounds like nothing so much as 'When Irish eyes are smiling.' But the captain has not mistaken his isles. The words proclaim: 'Diamonds are pretty but the island of St. Helena is prettier by far.' 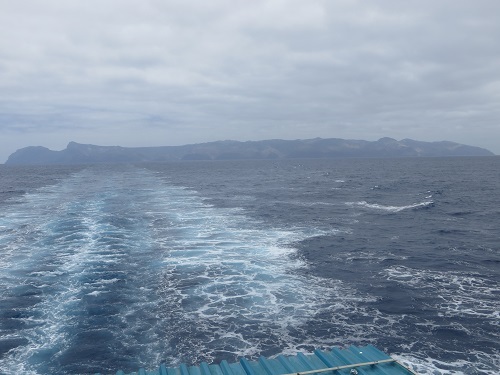 Yet further into the distance
The sea is certainly much smoother than coming out. Others say it's like a mill pond. In the purser's words we're surfing with the flow. I of course can still feel a vibrating swell.

On our last night we have a barbecue on the sun deck. No wonder everybody on board has the most enormous bellies protruding several miles out above their midriffs. There's an obscene amount of pork, spare ribs, sausages, salads - and they wolf it all down. 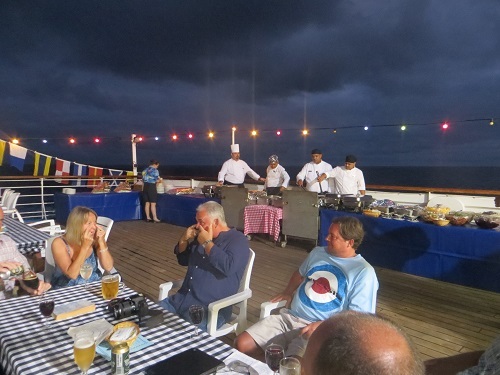 Getting ready for the barbecue 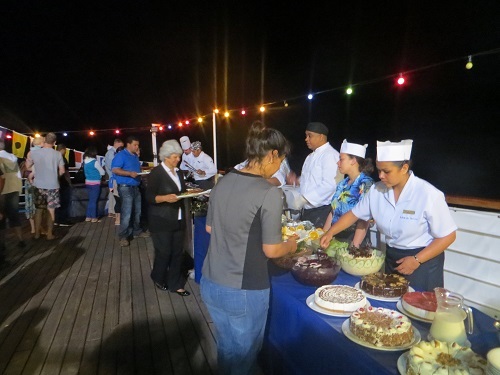 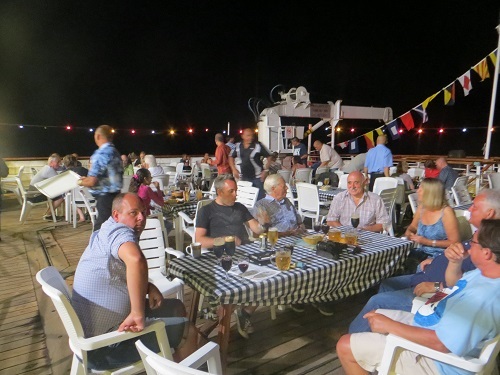 Needing a leak I toddle off to the sun lounge loo. Well, it's not my fault. The silly fat cow should have locked the door. She's absolutely gi-normous, squatting there on the john, huge flabs flopping down everywhere.

Her mouth drops open - and I'm rivetted, turned to stone by this latter-day Gorgon. My feet have been cemented to the floor by the sight.

At last I tear them free and beat a hasty if tardy retreat. I'll be traumatized for life. 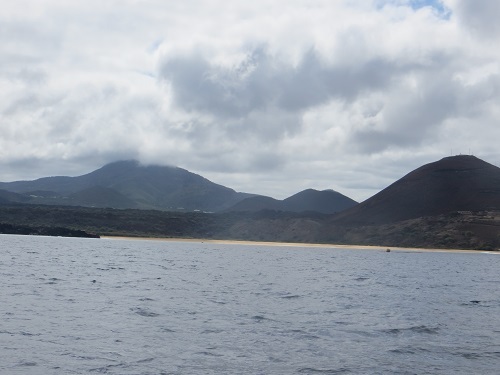 No lady in the loo photo, but here we're approaching Ascension Island 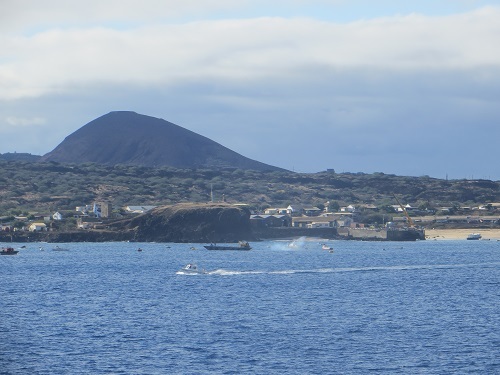