Intelligence is the ability to adapt to change. - Stephen Hawking

According to the 2015 State of the CIO report, there is a significant perception gap between business leaders and IT executives. Only 13% of business leaders perceive the CIO as a business partner. Even worse, 54% of line-of-business executives agree with the statement that non-IT departments view the IT group as an obstacle to their mission.

The digital business economy is having a dramatic impact on the IT department. In this environment, business units are now acting as technology startups. According to Peter Sondergaard, senior vice president at Gartner and global head of research, "Thirty-eight percent of total IT spend is outside of IT already, with a disproportionate amount in digital. By 2017, it will be over 50 percent. Digital startups sit inside your own organization, in your marketing department, in HR, in logistics and in sales."

Startups demand execution velocity; waiting is not an option. To meet the needs of the digital business, Gartner Research Vice President Mary Mesaglio advises CIOs to "become bimodal because one mode can't answer the complex needs of the organization."

I spoke with Joanna Young, CIO of Michigan State University, about the concept of the bimodal CIO and how to improve the perception of IT in the era of the digital business economy.

Young is an especially innovative CIO; she is fourth on the list of Top 100 Most Social CIOs, has co-authored 10 Ways To Become A "CIO Plus" and Bring Your Own IT (BYO-IT) Is The New BYOD, and has been a guest on CXO talk. Young believes that bimodal is a good step, but what is needed today is the multimodal CIO. 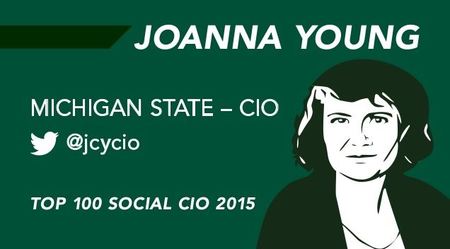 Bimodal (bī-mōd′l) --adj.
1. Designed for operation on either railroads or highways. Used of vehicles.
2. Designed for stability and agility. Used of CIOs.

IT leaders were first invited to sit at the table with C-suite executives back in the late 1980s. The role of IT had transitioned from isolated back office data processing to permeating every facet of business. The executive staff-level position of the chief information officer recognized that technology had become an essential part of business.

Today, in the data-driven era of digitalization with outsourcing, the cloud, and consumerized IT, the CIO can potentially influence the organization more than ever. But, in order to retain that high level role within the organization, today's CIO must go beyond simply providing technology and leverage the power of and.

As Young points out, there is no or, only the constant demands of and. The new normal is the multimodal CIO, designed for everything. The bimodal characteristics of agility and endurance are important, but business knowledge, innovation, strategic skills, efficiency, and operational insight have become equally vital to the success of the CIO in the era of digitalization, where every business unit functions as a startup.