Last weekend, Maine's Republican governor, Paul LePage, had a 36-foot mural removed from the state's labor department after claiming that it was "one-sided." The mural depicted imagery from labor history such as Rosie the Riveter at the Bath Iron Works, child laborers, and a 1937 shoe mill strike. 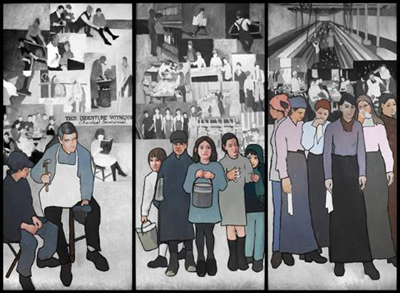 The offending work, which was created by artist Judy Taylor, has been whisked away to an undisclosed location. Taylor produced the mural in 2008 at the behest of the Maine Art Commission, and the project was federally funded -- which means that its removal may actually be illegal.

This controversial decision has lit up the media and the blogosphere, and ARTINFO has rounded up the most interesting reactions -- from the artist's objections to accusations of brainwashing to a call for a good old-fashioned tarring and feathering of the Tea Party governor.

That's Comrade Rosie the Riveter: Although the governor's office claimed to have received several complaints about the mural from the business community, it has cited only one source: an anonymous fax, which it showed to the Portland Press Herald, whose sender complained that the mural was propaganda, writing that "I felt for a moment that I was in communist North Korea where they use these murals to brainwash the masses."

Judy Taylor Speaks Out: In an op-ed for the Bangor Daily News yesterday, Taylor writes that her first painting as a child was of her grandfather on his farm in Nebraska. In the mural, which she researched and painted over the course of a year, she represented her mother as a little girl in one panel and based the figure of the young army officer on her father, who fought in the Korean War. She adds that "it was so heartbreaking to learn that this controversy may have started with an anonymous letter comparing this mural to a North Korean propaganda poster. Perhaps we should hang my father's Bronze Star for his service in Korea in the now empty reception area of the Maine Department of Labor until the mural is returned, as a symbol of the importance of remembering our history, and not shuttering it away."

Artist Solidarity: In protest against the mural's removal, Finnish-born Maine-based artist Vaino Kola has asked that five of his artworks that hang in Maine's state house be removed, the Bangor Daily News reports.

Former Labor Secretary Weighs In: In his Christian Science Monitor blog, the former secretary of labor Robert Reich disagrees with the removal of the mural and the additional decision to rename several conference rooms that honor labor leaders, including Frances Perkins, a former secretary of labor and the first female cabinet member. Quoting the governor's spokesperson that the mural and the room names are "not in keeping with the department's pro-business goals," Reich simply asks, "Are we still in America?" He adds that the U.S. department of labor building is named after Frances Perkins and contains portraits and murals of labor leaders. Reich concludes with the following line: "Governor, you might be able to erase some of Maine's memory, but you'll have a hard time erasing the nation's memory -- even if it's not in keeping with your pro-business goals."

Going Colonial on Paul LePage: Wonkette's Ken Layne writes that "Paul LePage needs to be yanked out of his office by a bunch of pissed-off grim-faced yankees, tarred and feathered (this hurts!), and sealed inside one of those display canoes at the back of the L.L. Bean."

And Going Even Further Back in History: In an editorial on Monday, the New York Times said that governor LePage had "stooped to behavior worthy of the pharaohs' chiseling historic truths from Egyptian monuments." It also points out that the governor's daughter, fresh out of college and hired at an entry-level assistant's job at the governors office, is making $10,000 more than Mainers who pass the police and teacher exams.

Open Call for Pro-Business Art: In collaboration with The Portland Phoenix, the New England Journal of Aesthetic Research has issued a call for pro-business art to replace the "degenerate, 'one-sided' mural at the Maine department of labor." If you need any ideas, consider this: "submissions are encouraged to honor Maine's grand business history, from logging to ship building, from the brave executives who put down the 1937 women's strike to steadfast proponents of child labor, from the paper mill bosses who purified our waters with dioxins to those who intrepidly called in the National Guard to restore order in the face of wrong-thinking mobs and crybabies, and surplus and salvage company CEOs who selflessly offer damaged goods for retail sale before giving it all up for public service."

Republican Blogger Defends Labor Mural, Mocks Maine: On SodaHead News, Republican blogger Jack Thomas asks Governor LePage, "Do you really think some large corporation is going to pass up on moving to your state because of your artwork? 'Sure, moving to Maine would have saved Widgetsoft millions, but damn it, that mural pissed me off, so we aren't going to do it.' The real reason people aren't moving their businesses to Maine is that -- it's Maine. It's cold and if you don't ski, rock climb or enjoy making your own maple syrup there's nothing to do there."

And on the Fake News: Referring to the governor's complaint that the mural is "one-sided," Jon Stewart quipped, "Do you understand how murals work?" He suggested that a new mural could include panels such as "Daddy Warbucks Gets a Shoeshine" and "Donald Trump Classes Up the Moon."

Get Brainwashed: WBUR's Radio Boston has put together images of the mural's 11 sections that can be clicked on for their titles and descriptions.