Australia's largest ever coal project, Adani's proposed Carmichael coal mine in Queensland's Galilee Basin, has been found to have a murky and troubling maze of corporate arrangements spread across known tax havens. At the same time, research released in January shows more clearly than ever that the Carmichael mine and related infrastructure is at profound risk of becoming a stranded asset due to the staggering carbon pollution it would cause. With such high stakes, the apparent lack of accountability and transparency is deeply troubling.

The project is on a scale few would dare to attempt in the current context of lingering low international coal prices, and the increasing momentum of investors divesting themselves of coal developments out of concern for their climate change impact. However dire the situation, Adani will continue to talk up the project in an attempt to generate confidence for investors, but the reality is, this project is of concerningly high risk and increasingly likely to fail.

Questionable accountability
New information uncovered by Fairfax Media reveals that Adani is operating a complex web of companies associated with the Carmichael mine and Abbot Point port out of tax havens, including the Cayman Islands. While there is currently no suggestion of illegality by this arrangement, it raises serious questions about the transparency and legitimacy of a highly controversial project that is of national interest to Australians and Indians.

Company documents suggest that many of the companies associated with the Carmichael mine and infrastructure development are not controlled by the head of Adani, Indian billionaire Gautam Adani, but instead by his brother, Vinod Shantilal Adani. Vinod has been named in an Indian criminal investigation into the alleged siphoning of $1 billion from Indian shareholders.

Company documents reveal that Adani sold its stake in the Abbot Point port -- through which the Carmichael coal would be exported -- in 2013 to a Singaporean company, however this was not made known to Australian authorities or the Bombay stock exchange. Adani was also found to still control a number of Australian companies linked to its Carmichael coal project in the Galilee Basin, despite excluding these companies from its 2013-14 accounts.

With the involvement of such a complex web of companies spread across the world, accountability and transparency will be difficult, to say the least. 350.org Australia and a range of other environmental organisations as well as the Greens have called for an investigation into Adani's Australian operations and a halt to any plans to develop the Carmichael mine.

Inflated employment figures
Just like the questionable accountability of the project, the claims regarding the economic and employment opportunities offered by the Galilee mine development are also highly questionable. According to The Australia Institute, the Galilee Basin job creation figures boasted by Adani were inflated by up to 300 percent. 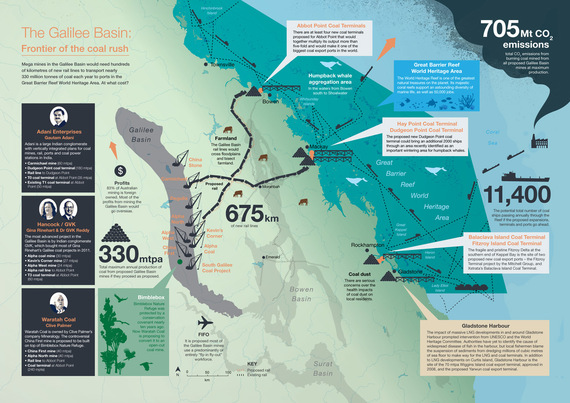 Infographic thanks to Greenpeace.

Coal that will stay in the hole
While there is much that is questionable about the Galilee Basin developments, there's one area that is unquestionable, and that is the devastating impact the coal if dug up and burnt would have on the climate. The Carmichael mine is one of nine proposed new mega mines in the Galilee Basin. Should these go ahead, the Galilee Basin mines will double Australia's carbon emissions and burn through six percent of the world's remaining carbon budget.

As momentum builds toward a global climate agreement that would revolve around limiting warming to 2 degrees celsius, research has shown that the implications of such an agreement would cause 90 percent of Australian coal reserves to stay in the ground. This much is clear: there is no room for Adani's Carmichael mine in a carbon constrained world.

If more coal is not the answer for Australia and India, then what is?
With the age of coal growth coming to an end much faster than predicted, despite Adani's grand expansion plans, there is a great transition to a low carbon global economy underway that urgently needs attention and investment.

For Australians - come see US economist and environmental thought leader Bob Massie as he kicks off an eight city tour from 20 February called the "Just Transition Tour: Australia's opportunities in the emerging low carbon world".