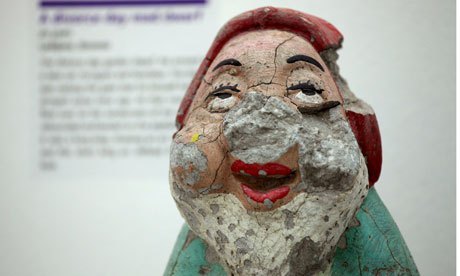 Zagreb, Croatia (formerly Yugoslavia) is the home of the Museum of Broken Relationships. While the point can be made that Yugoslavia is, itself, a major broken relationship, this particular museum deals with couples who have split. Many of these splits occurred well before Gwyneth Paltrow's (Oscar-winning/world-class mom/chef/foodie/blogger/wife of rock star) invention of the term "conscious uncoupling." The uncouples who inhabit the Museum of Broken relationships often uncoupled in ways that normal humans uncouple, with a lot of emotional and material detritus in their wake.

The idea for the museum was born in 2006, when Olinka Vištica and Dražen Grubiši? (the names, no doubt, rolling off your tongue) ended their relationship. It started as a touring exhibition. Disappointed and hurt lovers could, when they were visiting it, donate a fragment of their kaput relationship and a short description to go with the item/relationship. The ultimate goal was to get past the hurt in order to experience healing. Today the museum has a permanent location and has won awards. Its exhibits tour the world.

Life in the Boomer Lane can't afford to start a Museum of Broken Relationships here in the US. But she can share with you the items her friends would donate, if such a museum existed. LBL, herself, will donate replicas of the senior prom tickets she bought, only to have Danny Irons dump her a few days before the event. Here are others:

When R's boyfriend departed, he left behind a life size ceramic penis of himself. J happily donates that, since it takes up an inordinate amount of space in her condo, and because it is mighty tough to have sex with ceramic (not for lack of trying). If the museum doesn't accept it, she will try the Smithsonian.

G donates a cancelled alimony check, in the amount of $300, drawn on her ex-husband's new wife's bank account. While they were married, she incurred all financial obligations. G notes that he successfully found another woman to carry on the long-standing tradition.

She also donates a ring from that same Mr. Speedy. After the stone fell out, she found out that it was a $10.99 ring from Claire's boutique. This is either an indication of the high quality of items sold by Claire's, an emporium that caters to the middle school set, or one more piece of evidence that it was a good thing that Mr. Speedy slowly made his way out of S's life.

B donates the rolling pin his ex used to smash into his car to see if there were any items of value that belonged to her. The item with the most value was the rolling pin.

JA held a stoop sale in front of his brownstone. The signs advertising it around the neighborhood said "Come buy my ex's stuff" He will donate any unsold items that he still has.

When C's husband finally left (after continuing to live at the marital residence for several months because "he had no place else to go"), for years after, whenever his parents came to visit him, they stayed with C, because C was a far more pleasant host. C finally got a smaller place and donates her guest room sheets.

Others have offered to donate lawsuits, criminal proceedings, foreclosed properties, depleted bank accounts, and grown children who live in basements. These items belong to the ex's but have unfortunately become the property of the ones left behind. While she appreciates the gesture, the LBL Virtual Museum of Broken Relationships regrets that the museum cannot accept such items.