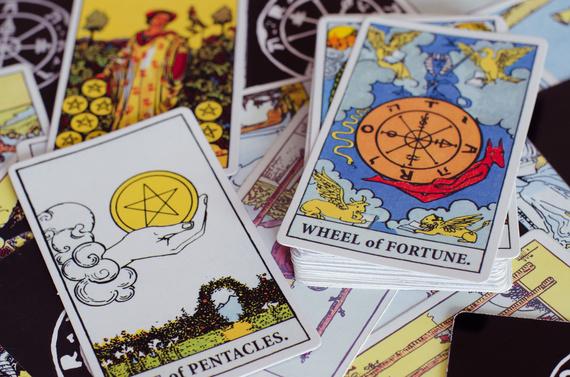 His face looks up from his shuffling only for a moment before he hands you the deck. He'll ask a simple favor that holds the answers you've been waiting for. The cards only show the same design, each back like the back of the one before it. Maybe you shuffle them with intent, or you just let them nestle together between your hands. Either way they know.

It is not the cards. It's not the images on them that tell the story. Look at them and you'll see the symbols meant to convey a common theme, icons we can all identify. It is the reader that brings them to life, to your life specifically. The cards spin a concert of music that streams through his thoughts. You can see it in his eyes, deep in concentration, listening, feeling, filtering the messages into the human language. Pulling in from the higher realms the right words, the words you need to hear.

You're sitting in front of him because even on an elemental level, you believe. Or maybe you're looking for evidence so you can believe in something. Don't we all want to believe in "believing?" Aren't we all looking for a way to confirm what we already know? Wouldn't we all like to have a conversation with our higher selves, provided we're even aware that we have one? And even if we're not sure that we have a bigger, better, soul self, couldn't we all use more hope that we do?

He doesn't know whether what he says means anything to you or not. He can only deliver a love letter from the universe, a short story of inspiration, a tale of caution or a study in courage. Whatever you receive, you cock your head in curiosity and feel almost a child-like sense of wonder. Information that you thought was so guarded, so efficiently hidden is laying on the table in front of you, being discussed by, for all intents and purposes, a complete stranger. Belief you wanted, belief you will get.