The Muslims Are Coming! will be released on Netflix on Jan. 21 so if you missed it last fall it's a good time to catch up with just how a band of edgy Muslim-American stand-up comics fared as they toured mainstream America to combat what they call Islamophobia and to explain, reveal and connect with prejudice one passerby at a time.

The documentary of this tour runs like an extra long episode of The Daily Show -- but in a good way. Plenty of montages of Fox featured crazies saying outrageous things coupled with both thoughtful and angry takes on this issue from the likes of Jon Stewart, Rachel Maddow, Aasif Mandvi, Ali Velshi and Soledad O'Brien.

But the heart of the film, and there is lot of heart here, is watching this band of edgy, self-aware, second-generation NY wiseass Muslim comics extend themselves to people in small town America who sometimes have no idea what to do with them. With sidewalk gimmicks like "Ask a Muslim a Question," "Bowl with a Muslim," "Hug a Muslim" as well as comedy shows in community centers large and small, featured players and filmmakers Dean Obeidallah and Negin Farsad, along with Aron Kader, Preacher Moss, Kareem Omary Maysoon Zayid and Oma Elba literally extend a hand and try for a dialogue, for understanding, for common ground. The lack of irony and guilelessness of the project underscores the simplicity of what is clearly a mission of tolerance.

The standup comedy is pretty great in and of itself -- besides a definitely light-handed approach towards hate there is plenty of standard comic themes that resonate across all cultures -- mostly making fun of your parents and your own awkward loserdom. But that's where this film gets truly interesting -- in The Muslims Are Coming! we learn as much about what drives comedians as what drives these Muslim activists -- a yearning to be seen, heard, respected and perhaps even loved. Sometimes they connect, sometimes they falter -- feminist and potty-mouthed Negin Farsad watches as hajib-wearing women walk out during her routine and she talks about it later with a vulnerability that steals the show.

There's plenty of straight political activism -- this band of comic Muslim brothers and sisters go to a gun range, a Southern bible belt Islamic Center and the Tupelo Mississippi-based American Family Association. They are always friendly and gracious and these efforts become both infectious and endearing and ultimately win the day. 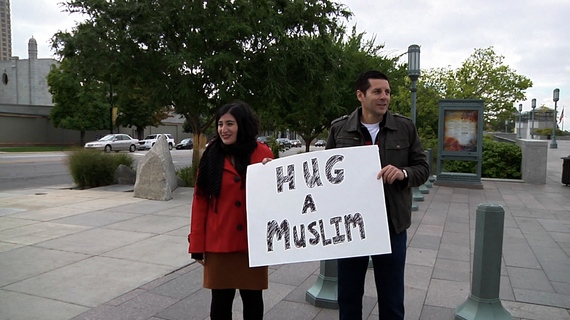 I recently interviewed Farsad and Obeidallah about their film:

Nancy Doyle Palmer: Any updates on reaction to the film at screenings at colleges and other venues ?

Negin Farsad: We opened theatrically in eight cities. By and large the reaction during those runs was GREAT. People came out in droves, they said lovely things, tweeted, someone even gave me free chocolate! It really doesn't get any better than that! But we also managed to get ourselves in right wing attack articles in Breitbart.com and Front Page. My favorite was a Washington Times article that attacked the movie while referring to me as Mr. Farsad throughout the entire piece. Now, getting attacked for making a movie about social justice is annoying enough but assuming that the director is a man -- that a woman wouldn't have the wherewithal to a make a movie worth attacking! -- that's like an Islamophobia-misogyny sandwich that makes me nuts.

NDP: Were there any other reactions from people on the street or in audiences that you weren't able to include in the film that you can share now that add to the goals of this project? Or the horror?

Dean Obeidallah: No horror! The reactions on the street in the film are a good sample of what we encountered from people wanting to engage and have substantive conversations to people asking challenging questions to many people not being interested at all in speaking with us. We are actually happy that so many took the time to chat and ask questions because we believe that the questions we featured in the film represent the common questions many have about Muslims.

NDP: One thing that struck me about your film is that we learn as much about the vulnerability and soul of stand-up comics as we do about Muslim activists trying to change the world. There is a bravery in putting yourself out there in a way that's both challenging your audience and asking them to care about you... isn't that sometimes just hard to do?

NF: I think you hit the nail on the head. All comedians are asking people to love them. It's a weird, sick, narcissistic, needy profession. But with political comics or with a social justice comic like myself (I'm pretending "social justice comic" is a thing!) -- with us we're also telling them to change their frame of thought. We're asking them to dash stereotypes, or be involved in the electoral process, or recycle, or... ugh, we're just constantly asking them for shit! So yeah, I think it is challenging to walk that line but I'm not sure what the alternative is.

DO: Since all the comedians featured in the film have performed stand up for many years, we really don't think about the idea that you are putting yourself out there. It is something we just do. Also personally I don't subscribe to the view that it takes bravery to do stand up. It likely takes a personality disorder. And to be honest I view police officers, firemen, people in the military, etc. as being brave. Telling jokes to other Americans doesn't rise to the level of bravery in my mind.

NDP: Negin -- you speak eloquently in the film about the extra burden of dealing with dated attitudes towards women within Islam as well as some of the more conservative audience members on the tour. Yet you also seemed to base a lot of your routines on sexual issues and language -- is this just because of your comic identity or is there a sort of deliberate challenge here?

NF: Like most comedians, I started out talking about my life -- dating, family, friends -- and it never occurred to me to censor myself. There were no other Iranian-American comic elders to use as a frame of reference -- I looked up to icons of American comedy and none of them were ever demonized for talking about sex or dating. I never considered my material racy until I performed for my first mostly Iranian audience. They were traumatized by my honesty. I guess I could have been jolted by that experience and tailor my material to them. But as immigrants' kid I didn't think that lying about my experiences was going to help anything. It felt odd that we were all pretending not to date or have any kind of sexual identity. Don't get me wrong; when a show asks for a "clean" set, I can do that. But I don't think we should fundamentally deny our real identities. Because here's the thing, we are from the mother country but we're also American. We have to forge a new identity in the American context and hopefully people will come along.

NDP: One of the most moving segments in the film for me is the "Hug A Muslim" segment in Salt Lake City. You all were always so open and friendly to people you met and so often received that in kind... can you speak to that discovery that so many people are, indeed, willing to embrace your message?

DO: I can't tell you how many actually embraced our message but many did embrace us! But obviously on some level if people are hugging you, it is a sign that they are open and tolerant to what we were talking about. The hope with the film is that it chips away at misconceptions and contributes to a better understanding of Muslims. But it will take more than one comedy documentary to change the world -- it is a start though!

NF. I think it's about the approach. If we wanted to go out there and provoke people we could have made a movie about the jerks of America. But what we really wanted to do was meet people and talk to them -- it's so simple and yet it happens so rarely. And we found that if you approach people with love, you'll get love in return. As cheesy and ridiculous as that sounds, I've found that most of the time, that's true. It makes me feel so much better about humanity