The Australian musician Robert Forster has a second career as a music critic that he didn't expect and didn't seek. Five or six years ago Christian Ryan, editor for a new Australian magazine called The Monthly, asked Robert to be its music critic. Robert had never written any criticism, but maybe Christian Ryan divined a latent talent in the cinematic detail of his songs and the way, in interviews, he speaks with warmth and insight about the music he's listening to. In a magazine devoted to politics and culture, tending towards the egghead end of the spectrum, Robert mostly writes about the musical equivalent of candy. He'll explain the craft and musical skill behind the cartoon facade of the Monkees, discuss the music of Delta Goodrem, a former teenage soap opera star in Australia, rub away Neil Diamond's platinum sheen to consider his songwriting, and - using Glen Campbell's new album as an example - talk about the act of homage, of younger producers taking a batch of contemporary rock songs to the hitmakers of previous generations. Robert has a formal manner and a deadpan wit but his stories are never ironic, he has a genuine respect for pop music. 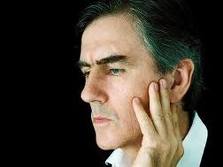 Detail from book jacket. The 10 Rules of Rock & Roll by Robert Forster

Robert won an Australian critic's award in his first year of writing but the sadness in this is that the story that won him widespread acclaim was a remembrance of his Go Betweens bandmate Grant McLennan, who died in 2006 from a heart attack at the age of 48. The Go Betweens formed in Brisbane during the punk rock era, were moderately successful internationally, took a break during the 1990's when both Robert and Grant pursued solo careers but a 2005 Go Betweens album, Oceans Apart, was beginning to lift them into mainstream success everywhere, including Australia. They were beginning to work on a new album when Grant died. Robert worked up a couple of Grant's songs from sketches and added songs of his own for a solo album, The Evangelist. His music and his criticism is now blending together into a hybrid form. He performs songs at his readings. His musical performances have long spoken introductions to songs that may refer to other musicians and other music.

Robert brings a working musician's perspective to his reviews, explaining a producer's influence on a musician's sound or how touring cycles determine when we hear what we hear. His own frame of reference is so wide that he's able to describe the music alive in the world. His description of his conversations with Grant McLennan give some sense of this:

This is what he was like. I'd drive over to his place to play guitar and he'd be lying on a bed reading a book. Grant never felt guilty about this. The world turned and worked; he read. That was the first message. He'd offer to make coffee, and I knew - and here's one of the great luxuries of my life - I knew I could ask him anything, on any artistic frontier, and he'd have an answer. He had an encyclopaedic mind when it came to the arts, and his knowledge always had a personal twist. So, as he worked on the coffee, I could toss in anything I liked - something that had popped up in my life that I needed his angle on. I'd say, 'Tell me about Goya,' or, 'What do you know about Elizabeth Bishop's poetry?' or, 'Is the Youth Group CD any good?' And, his head over the kitchen table, he'd arch an eyebrow just to ascertain that I was serious, which I always was. Then he'd start. Erudite, logical, authoritative and never condescending - not one ounce of superiority came with the dispensing of his opinion. God. I'm going to miss that. And of all the holes his departing has left, this for me is the largest: the person you can go to who is so much on your wavelength, stocked with shared experience, whom you don't ask for life advice (Grant would be one of the last people there!) but who, as a fellow artist, you can go toe to toe with and always come away totally inspired by. Well, that's a great thing. And it wasn't only me. Since his death, his role as inspirer and informer has come out strongly in remembrance.

A collection of Robert's criticism has been published by Black Inc books. He has an ear for a good hook; he's called it The 10 Rules of Rock & Roll and has written a list of "principles" that include:

1. Never follow an artist who describes his or her work as 'dark'.

2. The second-last song on every album is the weakest.

7. The guitarist who changes guitars on stage after every third number is showing you his guitar collection.

It's an engaging book. His criticism ages well but it's arranged in a way that dilutes its strength. Robert's remembrance of Grant McLennan and a story about the Velvet Underground that describes how the Go Betweens dreamed of being the house band for a 'factory' of artists are at the very back of the book when they should be the prism that all of the other stories are reflected through. It's impossible not to hear Robert's own music, too, when he's describing what he hears in the music of others. This would be astute criticism no matter who wrote it but has an additional aura of hipness that comes from Robert's own fame as a musician.

Robert's style of criticism builds on the tradition of the Rolling Stone interview that sprang from Jann Wenner's admiration for the Paris Review interviews that "brought you into the working process of the artist," and Rolling Stone's broad perspective: "From the start, we were devoted not only to rock & roll but to the culture and politics that surrounded the music, that shaped it and were shaped by it." This was during rock & roll's revolutionary second phase, when individuals were still building upon the music of the pioneers to create a new form of music. That music is now diffuse and pervasive and the fame of some musicians is as immense as presidents and popes.

In William Gibson's last novel Spook Country and the forthcoming Zero History, the central character is Hollis Henry, a rock & roll singer turned journalist whose fame warps any atmosphere she enters. In Spook Country the rationale behind an old-world spy asking her to witness an act of espionage that amounts to an elaborate prank being played on another old world spy maybe accounts for the circumstances that led to the current Rolling Stone story about the war in Afghanistan and why it would need to have been published in a rock & roll magazine to have had such an extraordinary impact:

"You want to tell me your secrets because I used to be a singer in a band?"

"Yes," he said, "though not because you used to be a singer in a band, specifically. Because you are, by virtue of having been a popular singer - "

"You already constitute a part of the historical record, however small you might prefer to see it. I've just checked the number of your Google hits, and read your Wikipedia entry. By inviting you to witness what we intend to do, I will be using you, in effect, as a sort of time capsule. You will become the fireplace brick behind which I leave an account, though it will be your account, of what we do here."