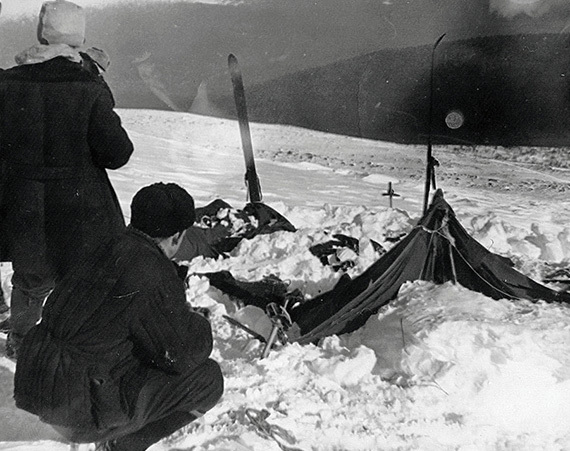 A view of the tent as the rescuers found it on February 26, 1959. Credit: Wikimedia Commons

In the winter of 1959, nine grad students (two women and seven men) set off on a holiday ski-hike expedition in the Ural Mountains. They never made it home.

Over the next few weeks and then months, search and rescue parties uncovered their bodies scattered over the terrain, some only in underwear or wearing each others clothes and others with a distinctly orange tinge.

Their tents sat abandoned, full of weather-proof gear, sweaters, and supplies. The sides had been slashed from the inside with knives, as the campers fled into subzero temperatures outside. Rescuers found a single-file trail of barefoot tracks leading down the mountain for about a third of a mile.

Five of the friends had tried to make their way back to the encampment, only to die near to a burned out fire about a mile from the tent, their bodies dusted with a few inches of snow. Later the rest of the group was found down a ravine (about 17 feet deep) in a cave they had dug, while trying to take shelter from the cold. Of those four, some had broken bones and internal injuries, and one girl was missing her tongue.

What in the world could've caused these people to go out of their minds and rush out to their deaths in the freezing cold?

Theories about why the campers ran range from avalanches and UFOs to undisclosed nuclear testing in the area (this did happen in Cold War-era Soviet Union after all). Logicians have explained away the fractured limbs and internal injuries by pointing out the bodies found were at the bottom of a rather steep cliff. And as for the lost tongue, scientists and investigators have said it most likely degraded because of conditions - although some reports still maintain it was ripped from the mouth.

We like Skeptoid podcast host Brian Dunning's explanation of events, which includes a loud bang in the night and relatives at an open-casket funeral mistaking a deep tan for orange skin.