The results of the 2010 midterm elections have contributed to a widespread belief that public opinion in the U.S. has shifted sharply to the right since the election of Barack Obama in 2008. Dramatic Republican gains, including the pickup of more than 60 seats in the House of Representatives and the success of a good number of candidates supported by the Tea Party movement, have led some conservative commentators to claim that the results represented a decisive rejection of the liberal policies of President Obama and the Democratic Congress and a mandate for smaller government, lower taxes, and less regulation of the private sector.

But do Republican gains in the midterm election indicate that the American public supports the conservative policy agenda of Republican congressional leaders? A careful examination of evidence from a recent national survey of public attitudes about the role of government raises serious doubts about such an interpretation. The results of the Gallup News Service Governance Poll, a survey of 1,019 voting age Americans conducted from September 13-16, 2010, indicate that while Americans often support conservative principles in the abstract, large majorities of Americans continue to support an active role for government in addressing a wide variety of societal needs and problems.

More than 40 years ago, two pioneers in the study of American public opinion, Lloyd Free and Hadley Cantril, observed that Americans tend to be ideological conservatives but operational liberals. In their groundbreaking 1967 book, The Political Beliefs of Americans, Free and Cantril found that even in the heyday of modern liberalism, the 1960s, most Americans agreed with broad statements of conservative principles. At the same time, however, when it came to specific programs addressing societal needs and problems, programs such as Medicare and federal aid to education, Free and Cantril found that large majorities of Americans generally supported activist government.

These results appear to provide strong support for the view that the American public was in a decidedly conservative mood in 2010 and that the results of the midterm elections represented a rejection of liberalism and a ringing endorsement of the Republican Party's agenda of smaller government, lower taxes, and less regulation of business.

Until you examine some of the other results of the same survey -- the ones involving government responsibility for addressing specific societal needs and problems.

It will probably not surprise anyone that 94 percent of the public felt that government should have major or total responsibility (4 or 5 on the scale) for "protecting Americans from foreign threats." National security is one of the few areas of government responsibility that typically receives overwhelming support from Americans of all partisan and ideological stripes.

Even a policy as radical by contemporary standards as "reducing income differences between rich and poor" drew the support of 35 percent of Americans (versus 45 percent who did not see this as an appropriate responsibility of government). The only area where the large majority of Americans rejected a substantial role for government was "protecting major U.S. corporations in danger of going out of business" which drew the support of only 19 percent of the public.

In order to assess the overall level of public support for governmental activism among the public, I created a governmental activism scale combining responses to seven questions: those dealing with consumer protection, the environment, healthcare, jobs, standards of living, discrimination, and income inequality. These questions all involve areas of government responsibility that would be expected to divide liberals from conservatives or Democrats from Republicans. Scale scores are based on the number of these seven areas for which respondents felt government should have major or total responsibility. The results are displayed in Table 1. Table 2 displays the relationship between scores on the governmental activism scale and a variety of demographic and political characteristics. Support for activist government varied considerably across demographic groups with support generally greatest among traditionally Democratic leaning groups and weakest among traditionally Republican leaning groups. Younger Americans, women, nonwhites, and those with low-to-moderate incomes were the most supportive of governmental activism. Not surprisingly, self-identified conservatives were much less supportive of governmental activism than self identified moderates or liberals and Republican identifiers were much less supportive than independents or Democrats. Even among conservatives and Republicans, however, about one fourth of respondents came down on the liberal side of the scale. 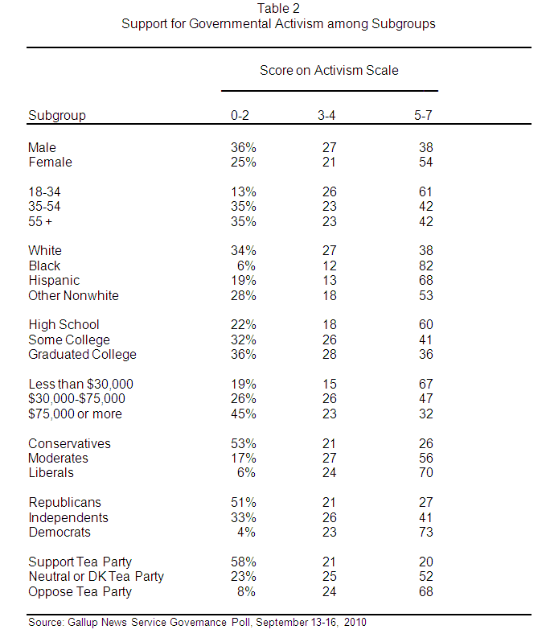 Despite the dramatic gains made by the Republican Party in the 2010 midterm elections, support for activist government remains very strong in the American public. Evidence from the recent Gallup News Service Governance Poll shows that today, just as in the 1960s, Americans tend to be ideological conservatives but operational liberals. They endorse conservative principles in the abstract, but support efforts by government to address specific societal needs and problems. These findings suggest that attempts by congressional Republicans to weaken or eliminate government programs in areas such as consumer rights, healthcare, income security, and environmental protection would be politically risky. While such policies might appeal to the conservative base of the Republican Party, they would almost certainly be unpopular with a majority of the American public.