You can't victimize yourself in a situation you started in the first place. Christians, in general, have a hard time remembering that as we choose to oppress, due to our sincerely held religious beliefs, yet cry "discrimination" when we feel a push back. This is especially true when those people are queer. Within the Christian community, there are those who believe we are being discriminated against. However, no one is pushing legislation that excludes Christians from basic legal rights in the U.S. (such as job protection and marriage). Nor is anyone physically assaulting Christians due to their religious beliefs or advocacy. Christians are not facing actual tribulations, rather, the "discrimination" they cry comes from not being allowed to discriminate others. It's a double standard and they keep crying wolf. Or we, I should say, since, like many other LGBT people, I am also a Christian.

A prime example of this Christian self-victimization is a meme that has been floating around the Internet, posted on social media platforms. It's been personally sent to me a few times, and I've had friends that have shared it on their Facebook pages. 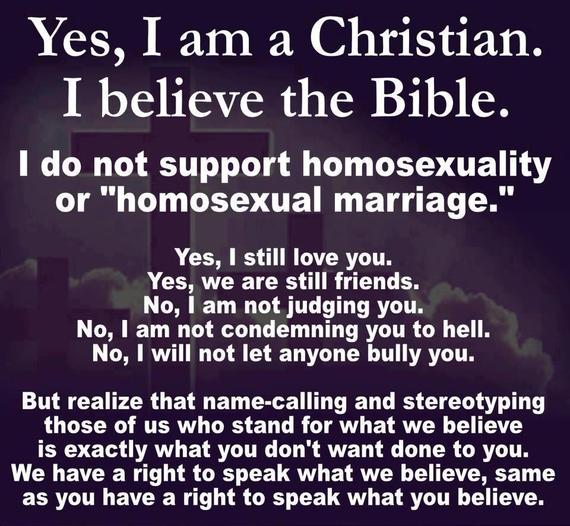 This meme is just a illustration to this common flawed logic. Many Christians feel they must assert their beliefs on homosexuality in order for everyone to not forget their stance on homosexuality (or if we truly honest, same-sex sex). Let's break down this meme line by line:

1. "Yes, I am a Christian. I believe the Bible." There are Christians who are affirming of same-sex relationships. There are also queer people who are people of faith. We too believe in the Bible, and the very opening statement of this meme belittles our own relationships with Christ.

2. "I do not support homosexuality or 'homosexual marriage'." What exactly do you not support about a sexual orientation? The majority of Christian denominations have now realized that reparative therapy is an extremely damaging practice. Not all, but the majority. This means these Christian denominations aren't interpreting the bible to condemn homosexual orientation but the act of same-sex sex. "Homosexual marriage" is only a term used by those who oppose us... It's called marriage equality, and if you really love queer people, you would be supportive of legislative equality.

3."Yes I still love you. Yes, we are still friends." It's not good enough to say we're friends and that you love me. Actions speak louder than words. Justin Lee of the Gay Christian Network just made a great post on this. You say you love Queer people? Prove it.

4. "No, I am not condemning you to hell. No, I will not let anyone bully you." But actually, you are condemning queer folk to hell, and the people that are doing the bullying are either Christians or those who use Christian's theological beliefs to support their bullying. This especially can be seen in the neo-colonialism of western evangelicals importing homophobia abroad.

I agree that stereotyping and name calling shouldn't be done. This topic is more nuanced than making sweeping statements that all religious folks are bigots -- especially when there are religious people who are theologically affirming of LGBT people. Having the right to speak hasn't been contested. But as Christians, what are we doing by speaking out against queer folk every chance we get? Do your actions bring people closer or further from God?

We continually see "bible drive by" with Christians just "speaking what they believe", pointing out the few bible verses that have been interpreted by some to be against same-sex relationships. They act as if we've never seen these verses before. Trust me, we know the verses. In fact some of us probably know the verses better than you do. We can debate theology, but what most of us care about most is how we are treating one another.

Sharing this graphic is completely self-serving. It's a pat on our own backs that we've done our "Christian duty" to let others know (in case you bumped your head and forgot!) where we stand on this subject. Before sharing this meme, or making statements like these, ask yourself: How much time are you spending talking about your beliefs, compared to showing the LGBT community what Christianity is all about? Our faith is continually being defined more by what we think others can't do, instead of what we can do for others. So instead of sharing this meme, or any like it, let's work more on showing the LGBT community Christ's Love, instead of just talking about it. Because at the end of the day, Jesus never said they would know we are Christians by our beliefs on divisive social issues -- but on how we love.