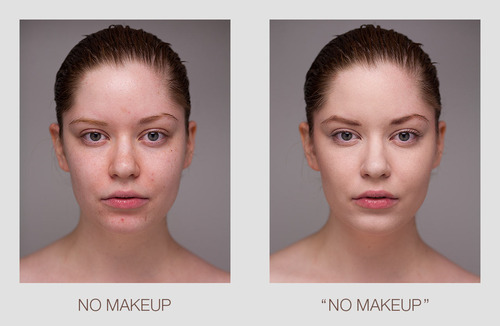 I remember hating my face and hating my skin and looking at all the girls around me in middle school and on TV and in ads and feeling like I was a monstrosity in comparison. But I remember the first time I realized women plucked their eyebrows. And wore concealer. And foundation. And powder. I felt like I had been lied to about what women look like. After modeling and realizing when photographers asked for no makeup, they really meant the photo on the right. I started realizing that the photo on the right was what was in skincare ads and posted by people claiming in the caption to be wearing no makeup some of the time. The photo on the right is the bare minimum of what we expect women to look like when they wake up in the morning.

I think makeup can be empowering, but acknowledging that it isn't natural is important. Modeling and wearing makeup so often makes me especially feel like its important to sometimes be uncomfortably honest about how much of the media we consume is altered in some way.

Part of me wanted to wait until my skin was better to do this concept but I realized that was totally missing the point.

Thanks for taking the time to read.

Sierra McKenzie is a full-time professional freelance model and actress based in Seattle. Visit her website www.sierramckenzie.com and her Tumblr, where this post first appeared.