We hear it all the time whenever the arguments are made for space travel and interplanetary commerce: 'We can mine the asteroids and comets and sell the ores for millions of dollars!' In reality, these pronouncements tend to underestimate both the astronomical realities and what actual ore extraction costs.

The meme of space mining has been with us since 1898 when Garritt Serviss penned the story 'Edison's Conquest of Mars'.We need better economic reasons for entering interplanetary space, and we will only have these if we look at all aspects of interplanetary economics with a large measure of realism. Dreams will only take us so far, but can also engrain old ways of thinking when new ones are required. Here are the Top Five facts as an astronomer sees them, about what mining activities entail.

Fact 1: There are not likely to be any 'ores' to mine.


On Earth, elements can become concentrated into ores that can be economically mined. How ore bodies are produced is still something of a mystery. Common ores seem to require volcanism, which means continental drift, or sedimentation (banded iron deposits), or even biological activity (e.g. vanadium). None of these mechanisms are present in asteroidal bodies. Asteroids seem never to have been a part of a primordial body that was massive enough to do more than heat the interior briefly, and separate heavier iron/nickel from lighter silicate-rich material. Chondrites are even more primitive and never experienced much heating, otherwise the delicate organic compounds would have been cooked out of existence.

Instead, we find asteroids that fall into a few dozen chemical families. You have heard of iron-nickel meteorites, but there are also stony meteorites, carbonaceous chondrites and many other groups. These can sometimes be traced back to a known parent asteroid. For example the "HED" group of meteorites, (howardites, eucrites, and diogenites) are associated with the asteroid Vesta. We even have a few dozen meteorites from Mars! We can even get a general idea where asteroid of different compositions are found in the asteroid belt! 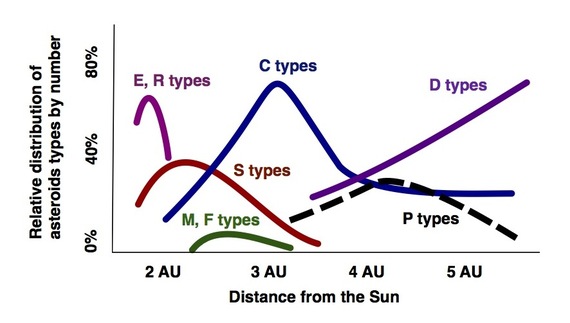 Fact 2: Most asteroids and recovered meteorites are relatively homogeneous.

Desirable elements are present at several grams per ton (1 part per million), but distributed throughout the rock. That means that extraction is a complex process requiring grinding the rock to dust and adding the appropriate chemical reaction or other process to extract the desired element. For example on Earth, gold is extracted using a variety of chemical methods depending on the impurities present. At some point, engineers will have to demonstrate how they can take a sample of asteroidal material in the laboratory and extract a useful element or compound from it at the lowest cost. This has not been done yet. 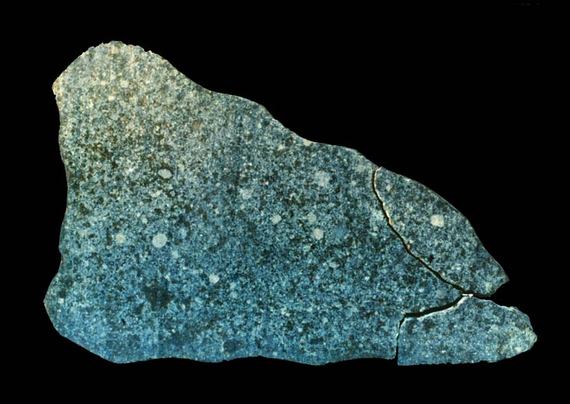 Fact 3: The primary resource in the outer solar system is ice!


The vast majority of the satellites of the outer planets are either completely composed of ice, or for the larger ones, have a denser silicate core buried under hundreds of kilometers of ice and liquid water. It is cheaper to mine a kilogram of ice in the outer asteroid belt or in comets, than it is to journey into the outer solar system to mine the same kilogram. There is no conceivable reason to transport ice mined in the outer solar system to Mars, the moon or Earth. In fact, Mars and the Moon are already known to have their own stockpiles of minable ice for colonists to use for drinking water and fuel. Comets and some of the asteroids in the outer reaches of the asteroid belt have abundant water that is more easily accessible. It is generally assumed that water-ices will be converted into rocket fuels (e.g. liquefied hydrogen and oxygen) to be used to re-fuel rockets in space at fuel depots near Earth and Mars.

Fact 4: What happens in Vegas stays in Vegas.

The expense of mining a ton of rock and rendering it into a few grams of a desired element in space prohibits bringing the processed element back to Earth. There is also no economic value to bringing rocket fuel generated from mined ice back to Earth. Some recent proposals (e.g. Planetary Resources and Deep Space Industries) refer to platinum mining, but the recovery and shipment cost of platinum from space would push the per-gram price of platinum well above the current world market value of $33.00 per gram. The infrastructure needed in space to mine and extract a gram of any element has to be recovered through the pricing of the element when brought to market. There is no way to make elements mined in space competitive with ground-based extraction and pricing. The only known solution that keeps the mining idea viable is that the extracted mineral, compound or element must remain in space! But why mine in space when you can mine on the surface of the moon, Mars, or even an asteroid to extract locally the raw materials to build your habitats?

Fact 5: Some of the easiest asteroids to reach are in near-earth orbits!


You don't have to trek all the way out to the asteroid belt to access useful resources. NASA plans to snag a boulder from the surface of one of these close encounters in the near future in its Asteroid Redirect Mission to be launched in the early-2020s. The boulder will be moved into a lunar orbit, where astronauts will visit it to conduct scientific research and recover samples. Even cooler, it will use the tiny gravity of the ARM spacecraft, acting over many years to actually change the orbit of the asteroid. If this works, similar techniques will be used to redirect asteroids that may be in a collision course with Earth in the far future.

If we are ever going to make space travel happen, we need to have a far more realistic economic reason for embarking on such an undertaking, and 100-year-old memes are not a very good place to start the discussion.