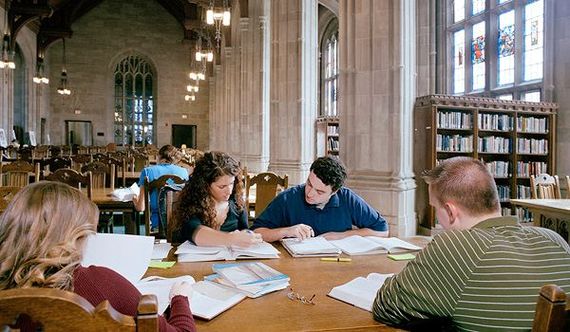 A particular narrative has sunk its teeth into mass media -- the myth of the coddled college student.

AC Grayling, Master of New College of the Humanities in London, recently penned an article with the headline, "Wimpering students need to grow up or get out of university."

Grayling writes, "It is impossible to pursue the study of history and literature in a "safe space" of cuddly toys and puppy videos."

Similarly, President Everett Piper of The Oklahoma Wesleyan University, wrote an impassioned blog post titled, "This is Not a Day Care. It's a University!"

In criticizing the notion of safe spaces and microaggressions, Grayling, Piper and others in this cohort miss the point entirely.

Dr. Everett Piper, is right. Universities aren't daycares. But, here are some things students who pay upwards of $50,000 per year in tuition can also expect to receive: a college experience free of rape, racism, sexism and blatant discrimination. Until students can walk through the halls of Harvard Law school without seeing the portraits of their black professors marred by duct tape; until students at Mizzou can look around without seeing a university building vandalized with a swastika; until students can stop waking up with the trauma of sexual assault, universities aren't doing their job right. Simplifying the problem by accusing college students who fight for resources and respect as being too sensitive is misinformed. Granted, there are some instances where even I am puzzled as to why things come off as offensive.

But we can't let extremists cloud the real problem here. President Piper is right -- we shouldn't need safe spaces because universities as a whole should feel safe to begin with. But they're not. And until they are, I applaud every student who continues to fight to make it that way.

Moreover, although individuals like Grayling love to evoke principles of freedom of speech and expression, they fail to address the impact of hate speech and aggression. Although universities cannot protect students from all forms of insults, they can -- and should be -- responsible for implementing programs and values that foster a positive campus climate.

After all, we can't talk about ending police brutality in America without talking about what is taught in the classroom. We can't talk about the failing American justice system without creating culturally competent lawmakers. Proposed initiatives, such as petitions for a more diverse faculty and adequate resources for students from marginalized communities, should be standard at universities.

Lastly, characterizing millennials as whining babies is exactly what naysayers pegged civil rights activists and pacifists during the Vietnam years.

College students these days are a resilient bunch. They carry the weight of finishing exams, job responsibilities and more -- all under the duress of paying expensive tuition and handling their social and family lives. These colliding factors take a substantial toll on the mental health of students; in fact, many of them suffer from mental illnesses. For marginalized students, the experience is far worse: For example, those who have PTSD from sexual assault or physical violence suffer even more greatly. So while it is the easy thing to portray college students as sensitive, Snapchat-obsessed millennials, our lived experiences are far from such stereotypes.

My friend Martha Daniel said it best: "My generation is called listless, lazy, and complacent until we call and fight for change...and then we're called 'overly sensitive' and unreasonable, idealistic and uninformed."

At the University of Southern California, I have had the opportunity to work with some of the most remarkable students on this planet. Many of them are fighting for more resources to support survivors of gender-based harm, many are fighting for recognition of the trans community, and many others are leading the charge on developing programs to foster dialogues about equity and inclusion.

My peers at USC are not alone. This movement is happening across many college campuses in America. But, in parallel, an interesting phenomenon is also taking place: As a new wave of student activism has emerged, so has backlash, nit-picking political correctness as the main issue on college campuses.

Cynics may argue we have come a long way from a time when blacks and whites couldn't sit with each other in the same diner; thus, college students like us should feel grateful for what we have and move on. In theory, perhaps this is the case. But, what about in practice?

We are living in a time when stores are openly turning away Muslim-Americans, when transgender individuals are murdered at a historic rate, when police officers put 16 bullets in unarmed black men.

In an MSNBC segment with Melissa Harris-Perry, Harvard Law student Derecka Purnell described exactly why change has to start in the classroom:

Whenever black or brown bodies are dropping to the ground, the society goes up in confusion as to why prosecutors don't bring charges to cops. One reason that is, I think, is because we do not have proper contextualization in legal education. So my peers aren't being pushed to think critically about the spaces they currently occupy. All the manifestations of anti-blackness that reside within Harvard also reside in the real world, we are not equipping my peers my colleagues my professors with the tools and language to graduate and become prosecutors, Supreme Court Justices...when they can't even be pushed to be critical of law school, how can we expect them to be critical of our criminal justice system that fails black and brown bodies everyday?


We may not ever create a perfect world, but it is idealism which drives us closer to one. Coretta Scott King said, "Struggle is a never ending process. Freedom is never really won, you earn it and win it in every generation."

For my generation, this is our fight. This is our struggle. And regardless of how we are characterized, we'll continue this battle until we earn our freedom.