A recent debate by Intelligence Squared at George Washington University examined a claim that liberals stifle intellectual debate on college campuses. So, are college campuses centers of liberal indoctrination, as critics claim, or is this another tired cliché from conservatives that is repeated more often than it is verified?

To check this out, I went to the "conservapedia" site to check out the evidence. The site, dubbed the "trustworthy encyclopedia," claimed that liberal professors promote their own ideology, instead of academic excellence. After some rather pejorative comments about never having peer review, benefiting from affirmative action and lying about research or credentials. The site then informed me that there was a list of liberal professors on a site called "liberal-education.com," but clicking on the link merely provided an ad that offered to sell me the site for "only $2,195."

Conservative columnist Cal Thomas was a bit more helpful. His 2005 column cited a study by three professors that claimed 72 percent of professors at U.S. universities were Democrats (by the way, I've taught classes since 1996 and have never been asked for my ideology on any survey). The study was conducted by the conservative Randolph Foundation, and is disputed by the American Association of University Professors (AAUP).

Sure we've seen examples on Google of liberal protests against conservative speakers. Google also shows that students at a conservative school (Liberty University) had to go see a presidential speaker launch his campaign (Senator Ted Cruz), or pay a fine.

A study in Psychology Today claimed to look at liberal bias by department. Its sample was 11 California colleges.

Darren L. Linvill, writing in Faculty Focus, researched the topic of potential liberal bias in academia. He cited two studies, one of which discovered:

An analysis of survey responses from 6,807 students at 38 colleges at the start of their freshman year in 1999 and then again at the end of their senior year in 2003 suggested participants tended to become more liberal during their college years, but at rates similar to the U.S. population of the same age range not attending college.

Additionally, there was no evidence indicating that institutions with more liberal faculty fostered any additionally liberalism in their students.

First, in disciplines that tend to attract liberal students (e.g. sociology, American studies, and cultural anthropology) there was no relationship between students' political views and the grades they received. 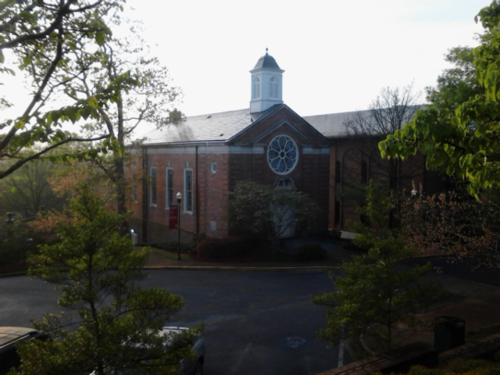 Photo is of LaGrange College's Wesley Chapel, right outside my office.

But there's an additional test, which goes beyond research by professors, foundations and "Google." It looks at how college graduates, supposedly victimized by years of liberal professor bias, actually vote. And here are the results, reported in "Christian Post," by Napp Nazworth.

In addition, Nazworth adds the following:

Obama's majority support from college graduates in 2008 was an anomaly for a Democrat... in 2004, Bush won the college graduate vote by six percentage points, 52 to 46 percent, over Sen. John Kerry.

When Bill Clinton won reelection in 1996, the only education group won by Republican Bob Dole was college graduates, 46 to 44 percent, with Ross Perot garnering eight percent.

I'm not sure such evidence was included in the Intelligence Squared debate. But maybe it should have been.