I explained the relationship between manufacturing output, productivity growth, trade deficits and job loss in my Snapshot on Manufacturing Job Loss: Productivity is not the culprit. It shows that productivity has always grown rapidly in manufacturing--there was no big upsurge in the past decade. The recent uptick in productivity occurred in other sectors of the economy, which does help explain why job growth economy-wide was so terrible in the Bush era, but that's another story. With manufacturing, the story is simple.

In the past, employment and the trade deficit in manufacturing were roughly stable for 30 years from the late 60s through the late 90s.* Then the Asian financial crisis hit in 1998. The value of the dollar soared along with the manufacturing trade deficit. Manufacturing employment fell like a rock, with a lag of about 2 years, as shown in the graph below. The manufacturing trade balance did start to improve in 2007, but the big drop in the deficit came in 2008 and 2009, and was caused by the recession. The recession was also responsible for the loss of about 2 million of the 5.7 million manufacturing jobs lost since 1998. 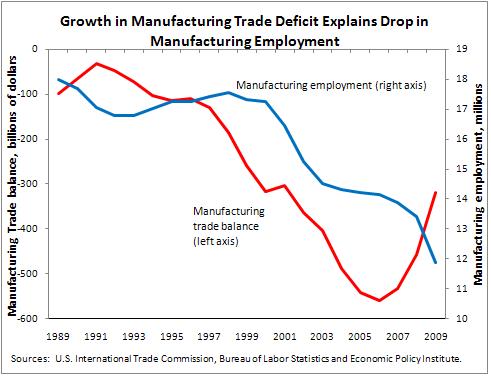 Bonddad is misguided, and his analysis is confused. His first mistake is to plot a chart of the U.S. Industrial Production Index since 1960 with a trend line (it's clearly not a fitted trend, but something done with a ruler or graphing software). He says that the increase in manufacturing output is "continual", suggesting that growth has been steady, but that's flat out wrong. One problem is that you can't calculate or "eyeball" growth rates from a linear plot of output. Every introductory, undergraduate finance student learns that you have to plot stock prices on a logarithmic graph to spot changes in growth rates. This is simply because growth compounds--remember, your grandmother taught you that bit of wisdom about the advantage of putting your money in a savings account.

In fact, growth in U.S. manufacturing output dropped sharply after 2000, as shown in my snapshot above. If we use the FRB industrial production index and the business cycle peaks shown on Bonddad's graph, and calculate simple compound average growth rates, the index grew 4.1% per year between July 1990 and March 2001 (the Clinton Business cycle). However, growth in the index fell to only 1.8% between March of 2001 and December 2007. The BLS output numbers show even slower growth in the Bush era, as indicated in my snapshot above.

But there are more problems with Bonddad's trade and employment graph. It has a blue line which purports to measure imports of goods and services (measured with a negative sign, which is appropriate). But this series never exceeds $700 billion in imports. However, U.S. imports exceeded $2.5 trillion in 2008. Something is wrong here. It's not the trade deficit either, because that was $-760 billion in 2006. Finally, the story is about manufacturing employment. The graph reports employment in "goods producing industries," which include a number of domestic, non-manufacturing industries. The graph should compare manufacturing employment with the trade balance in manufactured goods, as I do in the chart above.

To close the trade gap and rebuild manufacturing will required a coherent trade and industrial strategy. We must end currency manipulation by China and other Asian countries, aggressively attack unfair trade practices and rebuild manufacturing. We also need to create at least 4 to 5 million jobs in the rest of the economy to help end the recession, and rebuild demand for manufactured products. These are topics for another day. That discussion should start by acknowledging that productivity growth is a key source of strength and competitiveness in manufacturing, and is not responsible for manufacturing job loss.