I've been struggling with a piece for some time now on being a 1950s housewife or at least acknowledging that the foundation of how I manage my household and conduct myself personally in marriage is based on 1950s housewife principles - -that in order to maintain a strong and loving marriage, a woman must put her husband's needs first.

My position is deeply controversial, to be sure, in its seemingly un-feminist stance. And yet, I maintain that an "evolved and modern version" of the tenets of the 1950s Housewife philosophy is absolutely about empowering women.

For the majority of us, the visual this epithet immediately conjures is a put-together woman in an apron, smiling, with a cocktail-at-the-ready and dinner for her man on the table. Subservience.

But what if being an "evolved" version of the 1950s housewife is by choice? When someone willingly assumes the role of pleasing one's man as her daily modus operandi, does that make her subservient or just plain wise?

A girlfriend recently told me that years ago when she was still in "triage mode" with four young children, she lamented to me how tired she was and that she had no energy left for her husband at the end of the day. She said my response surprised her:

Treat your husband with the same love, patience and attentiveness that you give your kids. Treat him like your best friend -- listen to him, make time for him, engage because someday the kids will grow up and leave and then what? You can't put your best friend on hold because you're too busy being a mom.

I see it all the time -- what "just leaving everything as is" or complacency and therefore apathy does to couples. And it's dire.

I have seen first hand that for the most part, true unconditional love exists only uni-directionally --from a parent to a child and not, as we've been led to believe, between spouses. While so many of us have grown up with the fairy tale notion that unconditional love is a given in "till death do us part," human nature and the unwavering stats on divorce tell us otherwise.

Everyday I see women who are so very, very "on" for their children but have let themselves go personally. Some of these women look like their hair has never seen the right side of a hairbrush. They pull it back in the same ponytail, don the same polar fleece or pull-on the same unflattering workout wear day in, day out. They wouldn't know what a mascara brush was if it poked them in the eye.

But (!!) they pat themselves smugly on the back because they are engaged in their children's lives like no generation before them. They bake muffins and cookies and cupcakes, they are active on TPA, they volunteer at the library and they know their children's study schedules as if they were still in school themselves.

So many of us exist for our children and while it's admirable, it's not enough. We have become so focused on the idea of what a perfect mother looks like, that we've all but abandoned the notion of what an ideal wife should be.

We put so much of ourselves into our kids but without realizing it, we have become the manifestation of the double standard. We scorn the entitled but are we not entitled ourselves to expect unconditional love when we bring little to the marital table?

Too often I've seen women who have become angry and resentful at their husbands for not understanding and appreciating our role as mothers. Have we ever stopped to consider though that if our husbands slog it out throughout the week at the office or zig-zag the globe on airplanes to provide accordingly for the family, maybe it isn't all rainbows and lollipops for them either and maybe we should appreciate them too and wait for it... show them that we do?

Are we really so naïve to think that for a stressed-out husband who has just returned from a business trip, the visual of us as angry mothers with unwashed hair, in our yoga pants with no make-up and kvetching loudly about having managed carpools and homework for 10 days straight while they "gallivanted across the globe!" is going to do it for him? Hubba hubba...

If I sound harsh and unkind that is not my intention. I want women to win and be the best version of themselves so it saddens me deeply when I see women who have let themselves go in the name of parental martyrdom. I believe passionately in the girlfriend code and supporting one another. So I would ask any woman this:

Take a good hard look at yourself. Forget your husband's ideal of an attractive woman. In both attitude and appearance, are you YOUR ideal of attractive? And as it stands, would YOU want to sleep with you?

Complacency is the poison of relationships. We can't expect unconditional love from our husbands if we've stopped making ourselves -- and as fall-out, our spouses -- a priority.

For me the 1950s Housewife is about re-focusing time and energy back into my marriage. It's about giving in order to receive -- to get the maximum from my relationship. While I'm under no illusion that this practice will guarantee I will be married forever, I know for myself that I've given it my all.

Engage with your husband. Exist for yourself, not just for your kids. Never let yourself go. Make your friendship with him a priority. Conquer complacency. It's damned hard work but anything worth keeping is worth the effort. 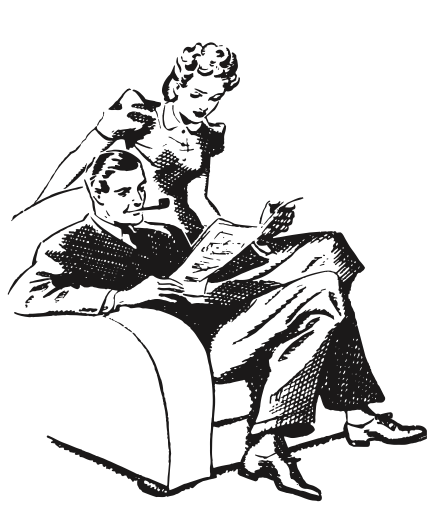