Recently, Piers Morgan penned an incendiary piece titled "If black Americans want the N-word to die, they will have to kill it themselves." The former CNN host opined that black people must never use the "N" word, because it reinforces longstanding racial tension. He writes that he understands that when black people use the "N" word, we do so with a certain air of irony, that, when we choose to use the word, we are reclaiming and redefining an element of social violence that once branded us as second-class citizens. But he wades into the "blame hip-hop" argument that mainstream rap popularized the slur and encourages the black youth of today to use the "N" word with very little consideration of its historical underpinnings. He writes, "The reason it is so ingrained in pop culture is that many blacks, especially young blacks reared to the soundtrack of N-word splattered rap music, use it in an ironic way." He ends his piece imploring us black folk to "teach the youth of today the N-word is so heinous that even to repeat it ironically is to perpetuate its poison" and further urges us to not accept the "N" word as a complicated fixture within our culture and to instead disregard it wholly, in the same way that major sports leagues do.

I held my breath the entire time I read this misguided piece. As a dark-skinned black feminist and avid hip-hop fan, I saw all the markings of a privileged white male telling me and my community how to behave ourselves. Herein lies the difficulty in cultivating cross-racial dialogue, especially with white self-styled allies. Oftentimes, white self-proclaimed allies leave their mark within the black struggle by way of paternalistic edicts on "appropriate" forms of conduct. They tell us what is and isn't "acceptable," with no room for debate and no space for us to voice our discomfort with their commandments.

After publishing his contentious piece, Morgan dismissed luminary Ta-Nehisi Coates and invoked the white-privilege fiction of "reverse racism" and the like: 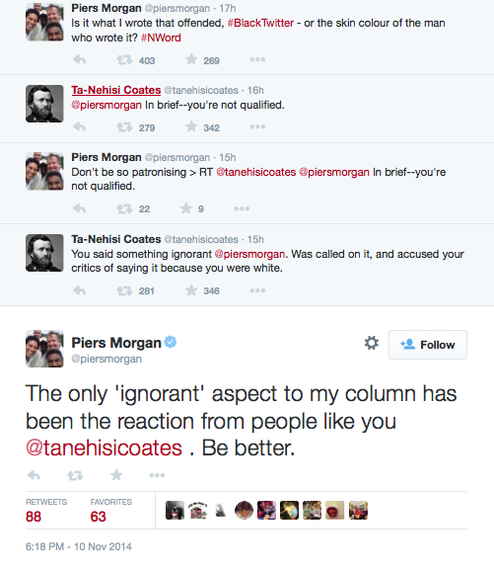 Screen grab courtesy of Olivia Cole at The Daily Dot

With a durable sense of entitlement, Morgan chastised one of the leading voices within the black community for daring to challenge the obvious white-savior complex that Morgan perpetuates.

Morgan is representative of white-male privilege and entitlement, especially within the racial-justice sphere. For one, he charges black people with ending racism by playing respectability politics. He wants us to police our actions for easier assimilation into "multi-cultural America." Moreover, he salaciously fixates on black actions within the racial-justice framework without considering those actions within the context of the rapidly corrupting maliciousness of the prison-industrial complex, the school-to-prison pipeline, the failed "war on drugs," and the slew of other structures that actively erode productive race relations.

Instead of offering a detailed and thorough discussion on the "N" word within the dynamics of institutional racism, Morgan blames contemporary toxic racial tensions on a standalone heated slur rather than on a well-financed network of racist and predatory institutions that more directly, aggressively, and violently oppress and ravage black and brown communities. Prone to the pitfalls characteristic of the 24-hour news cycle, Morgan does not perform the labor-intensive analysis that such a topic requires.

What is even worse is that he was completely unoriginal. He held hip-hop responsible for the pervasiveness of the "N" word. Always a convenient "evil" blamed for blighting the innocence of black children, hip-hop is a scapegoat that, quite frankly, I'm tired of hearing about. The effect that hip-hop has on black communities is not worth a conversation unless consideration is given to how capitalism eviscerated a genuine form of artistic expression. Without the necessary context of how for-profit engines masterfully propel uneven and skewed tropes of black and brown communities, the argument is shallow and undeserving of any substantial dialogue.

Where Piers Morgan fails in his relatively vapid piece is that he is not talking to his community; he is talking at mine. He is telling me and my people what we need to do to end our own oppression, without any selfless exploration of what it means to carry the weight of black skin. I do not use the "N" word, which is a choice I have made for myself, not because some rich white man who has never experienced (and will never experience) the burden of blackness told me to.