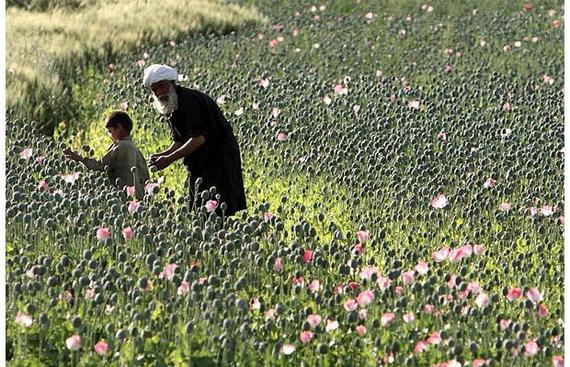 Every country on the globe would like to distinguish itself by some description of its societal achievements, natural beauty, education or other attributes. While Afghanistan can stand out with its beautiful landscapes and certain historical events such as defeating the invading USSR, for some time now it has had the dubious distinction of being by far the world's largest producer of opium, the raw material of heroin. The United Nations estimated that last year's opium harvest amounted to about 6400 tons, constituting 90% of the entire world's production, hence the 'Narco-Republic of Afghanistan.' The devastating consequences of this distinction are felt from the country of origin to Europe and even in the sleepy towns of rural America where heroin is more plentiful and cheaper than ever. In Afghanistan the number of "podaries" (users of powder) as they are called colloquially has been on the rise. According to reports by the US Department of State and the Afghan government 11% of Afghans use opium in various forms. This could be one of the highest number of addicts in the world. Teenagers and even children under the age of 10 have been afflicted by the problem. Surprisingly the percentage of Afghans using drugs in the rural areas is higher than that in the large cities. In a country which lacks any kind of social net, education or health care the problem is even more acute. Podaries are shunned by the rest of the society. The Kabul River, which bifurcates the city, runs mostly dry in the summer providing temporary shelter for the users. I have seen many podaries in Kabul taking refuge under the Kabul River bridges waiting to die. The poppy planting season in Afghanistan begins in October and runs until the end of November depending on the region. The opium resin is harvested in late spring to early summer commensurately. So now is the high season of harvest and what kind of a bumper crop this year will yield remains to be seen. Poppy flowers are mesmerizingly beautiful, and decorate the countryside with assorted colors before the harvest season begins. The largest poppy fields are in the Helmand province in southern Afghanistan bordering Kandahar province, another fertile poppy producer. Due to the large scale of operation, the typical poppy farmer does not have enough manpower to harvest the opium. So many people such as school kids and teachers otherwise engaged in other activities pitch in. At times migrant workers from the neighboring provinces are brought in to help in the slow and laborious harvesting process. When the flower is gone and the bulb is ripe, it is time to extract the milky substance within. An incision is made on the bulb's skin similar to the tapping of a maple tree. This takes place in the evening. The thick milky sap (raw opium) begins to flow very slowly, becoming thicker and accumulating on the bulb. The harvester returns early in the next morning and scrapes off the stuff with a blade. They go from one bush to the other collecting the raw opium in tins or similar containers. The farmer sells his harvest to a wholesaler and thus the complicated journey begins. There are many layers involved, including the Taliban who collect hefty taxes which is one lucrative way to finance the insurgency. The opium is eventually processed into heroin in labs located in lawless areas of Pakistan's Baluchistan region and elsewhere, then trafficked to the rest of the world. Looking back at history, there is no indication that Afghanistan had been a drug exporting country prior to 1978 and the beginning of its descent into chaos. While poppy had been cultivated in the highlands for millennia, it was mostly for local use on a very small scale. Some argue that the current insurgency and instability is the result of the drug proliferation. I argue that the primary cause is insecurity which has resulted from the existence of ineffectual and corrupt Afghan governments since 2002. Many former warlords who perpetuate the culture of impunity have been directly or indirectly part of the government. Many of these warlords are also directly involved in the proliferation of poppy, especially in the southern provinces of Helmand, Kandahar and Nimroz. It is possible for Afghanistan to rid itself of the dubious distinction of the world's largest producer of opium. But, for that to happen, there will be a need for fundamental changes in the composition of the government and the marginalization of the war/drug lords who have had much sway. The Taliban banned poppy cultivation in 2000 when they were still in charge of Afghanistan. The yield fell to 180 tons in 2001 from around 3000 tons in the year 2000. If the Taliban could do it, a competent, legitimate central Afghan government could do it too.