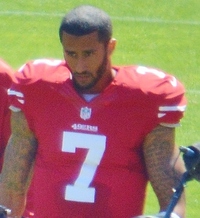 I'll admit my first reaction was disappointment when San Francisco 49er quarterback Colin Kaepernick refused to stand during the national anthem before a preseason game because he didn't feel pride in a country oppressing people of color. I felt there were better ways to show his anger than to disrespect the symbol of our nation. Soon, however, my rudimentary knowledge of history kicked me in the rear.

Before we wail about how offended we are, remember that our country was formed out of protest. Our first amendment protects this right better than Kaepernick's offensive line could ever do. It's not a question of whether he has the right to do this, but whether it's right. And there's where things get tricky.

Protest is rarely looked upon favorably in the moment despite often being a catalyst for meaningful change. Think the Boston Tea Party. Dr. King's march on Washington. The Seneca Falls Convention. The Stonewall Riots. Heck, even Occupy Wall Street has made its way into the stump speeches of each presidential candidate. Given time, old grapes become fine wine.

Lost among the shouting over patriotism versus racism is how easily our symbols overshadow the things for which they originally stood. In a truly American twist on irony, it seems we're taking symbolism too literally. That's not to say symbols are unimportant in maintaining national identity, but all too often they tend to cloud substantive dialogue. As George Carlin used to say, "A flag is a symbol, and I leave symbols to the symbol-minded." 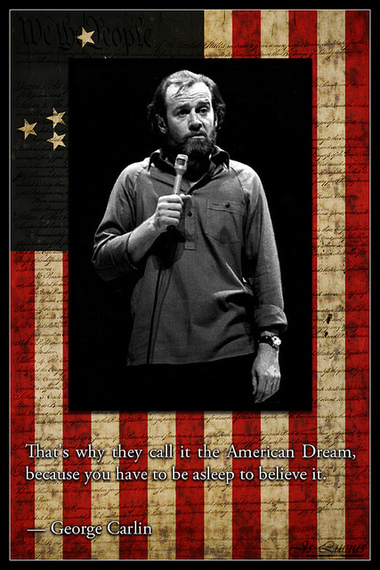 For instance, the "Star Spangled Banner," adapted from Francis Scott Key's poem "Defence of Fort M'Henry," is one of the oddest national anthems on record. The tune was stolen from The Anacreontic Society, a London gentlemen's club consisting mostly of wealthy men dedicated to the ancient Greek poet Anacreon and his odes to drinking. 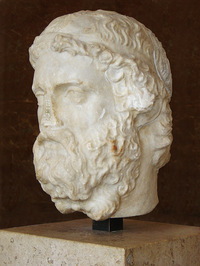 If one's national anthem is an expression of its national identity, perhaps it's not a coincidence that ours asks questions like a four-year-old at the toy store: Oh say can you see, by the dawn's early light, what so proudly we hailed, at the twilight's last gleaming? Whose broad stripes and bright stars, through the perilous fight, o'er the ramparts we watched, were so gallantly streaming? And the rocket's red glare, the bombs bursting in air, gave proof through the night, that our flag was still there. Oh say does that star spangled banner yet wave o'er the land of the free and the home of the brave?

There's also the inconvenient third stanza of the original poem in which Key glories in the deaths of those American slaves who had the audacity to fight for the British and their only path to freedom: Their blood has washed out their foul footsteps' pollution. No refuge could save the hireling and slave from the terror of flight, or the gloom of the grave. 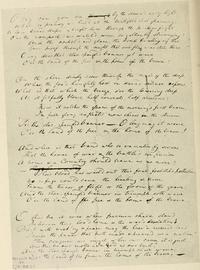 This throws shade on the idea that the anthem is truly inclusive, especially because the only reason for deleting the other three stanzas when Congress made it our national anthem in 1931 was that they might offend the British.

United States Code 36 U.S.C. § 301 codified the practice of standing at respectful attention during the playing of the anthem, but there's no penalty for ignoring this statutory suggestion because, you know... First Amendment. By the same token, Code 21 USC §461 & 9 CFR §381.171(d) make it a crime to label "Cured Turkey Thigh Meat" less than one-half the size of the product name and less than one-eighth inch in height. Sometimes, we go overboard.

Some equate Kaepernick's decision to question this symbol to hobbling Betsy Ross with a shovel. Yet if Kaepernick didn't have a point, his protest would have been laughed off by now. We don't have to agree with him, but we do have to get over ourselves.

Protests are meant to start dialogues, and only those destined for the wrong side of history dismiss them lightly. Regardless of whether you feel Kaepernick is the best messenger for this discussion (he isn't) or that he's somehow disrespecting our troops (he isn't), there's no denying we're still talking about it. Like our anthem itself, this controversy raises more questions than it answers.