The National Review's cruise ship stops in Canada tomorrow -- for about a minute and a half -- and those passengers with the courage to go ashore should have a wonderful time. We have a tradition of hospitality to draft dodgers.

I don't truly expect anyone to disembark from the ms Noordam this Saturday night. That would involve curiosity. But it would be kind of interesting for the people who just spent three months shrieking about illegal immigration to see a country that will apparently let in just about anybody.

At least for a visit.

Still, even a gorgeous mosaic has to draw the line somewhere.

We're supposed to welcome Ramesh Ponnuru, Jay Nordlinger and Rich Lowry? Does any nation have that many couch cushions to smell?

John O'Sullivan? For six hours? What will the rest of us drink?

Vancouver's going to let Dick Morris wander around at will? Haven't the prostitutes suffered enough?

I hope Canada doesn't forget that it's all just for laughs. That the National Review isn't really a magazine at all, it's just a club where a certain kind of chin-challenged endomorph can sniff deeply of his own fingers and experiment with cruelty as a counterintuitive answer to everything.

(Touchingly, it's all paid for by small grants from America's largest corporations. The way Mobil used to sponsor Masterpiece Theatre.)

I hope Canada still doesn't have its back up about the National Review cover story that called the whole country "Wimps." Oh, wait, here it is. 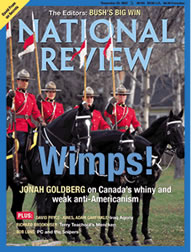 That's the one where Jonah Goldberg wrote:

"A full-scale conquest is unnecessary; all Canada needs is to be slapped around a little bit, to be treated like a whining kid who's got to start acting like a man."

Of course, they didn't mean it when they ran it. Same goes for the cover line about "whiny and weak." They were just kidding around. Like when they said Saddam Hussein had WMDs.

The same goes for:

"But Canada is barely a functioning democracy at all: Its governmental structure, if described objectively, is far more similar to what we would expect in a corrupt African state with decades of one-party rule."

Canada got sort of testy about the wimp-thing, back in 2002. But you have to give the National Review some credit. It takes a special type of balls to call a country cowards while you're killing its sons. Goldberg's goof ran the same year that an American F-16 dropped a laser-guided, 500-pound bomb near Kandahar, but even nearer to a unit of the Princess Patricia's Canadian Light Infantry, killing four of them, and injuring eight more.

The wimps had names. They were:

Or maybe that's what Goldberg meant by "slapped around."

I hope no one in Canada is still sore about something else Jonah Goldberg wrote:

"The Canadians have for a while now taken it upon themselves to be a "moral superpower," not a military superpower. The problem with this -- as is so often the case with groups, institutions, and even nations seeking to be the conscience of the world -- is that it leads to knee-jerk and cost-free preachiness rather than any attempt at real sacrifices... Its military, which used to punch well above its weight, is quite literally rusting through, and there are no plans to remedy that. In short, Canada has willfully forgotten that a nation which wants to be a moral superpower doesn't just say nice things, it does right things even at great cost..."

They have to understand he's just kidding around. (And that he doesn't know what the words "literally" or "rusting" mean, or he wouldn't apply them to an organization.) Even if he wasn't kidding, you'd still have to take your medicine, on the "real sacrifice" stuff, when it's coming from a man like Jonah Goldberg, who, although he didn't serve himself -- ever, anywhere, at any time -- did grow up in a broken home with a chain smoker.

Thirteen thousand five hundred Canadians have served in Afghanistan. Canada has 2500 there, right now, from a country with one-tenth the population of the United States. The dead die. Four last month. Twenty-two this year.

No one on the National Review cruise wants to visit Canada. An obscure law, the Passenger Service Act of 1886, says they have to. The Act says a foreign-flagged ship making a roundtrip journey from a U.S. port has to stop in at least one other country. The Noordam is registered in the Netherlands. The National Review could have booked an American ship, but that would have cost more. What with all those messy rules about "safety" and "wages."

So they have to kill six hours in Victoria, Saturday night.

The Holland-America Line suggests that high tea can be taken at the Empress Hotel. (Not easily done, at night.) Or you can "stroll through the charming downtown that lives up to its British-flavored name with double-decker buses, turreted castles, fine British woolens and delicate china." (These shops, of course, will be closed.) "A coach-ride away, the Butchart Garden earns every superlative of its impeccable reputation for glorious blooms and redolent scents."

The Butchart Garden really is beautiful. But if you go just a few more miles, you can visit the Veterans Cemetery in Esquimalt. The golf course next door will be closed, but you can wander under the evergreens that line where it borders graveyard. The chapel is small, and plain, but the lanterns on the walls used to burn real whale oil. It's very quiet at night.

One of the newer graves, there, belongs to Bombardier Myles Stanley John Mansell. He lived in Victoria and was killed in Kandahar last year. He was 25. He was blown up by a roadside bomb. He's buried between his grandfathers.

At Myles Mansell's funeral, one of his uncles said, "In our hearts, he will always be home." Which isn't as hilarious as "Canada needs to be slapped around like a whining kid," but it's not bad.

"In our hearts, he will always be home."

I hope no one in Canada gets offended when people like Jonah Goldberg write ugly nonsense. They don't really mean it. They're just trying to be vile, as a substitute for how men might talk.