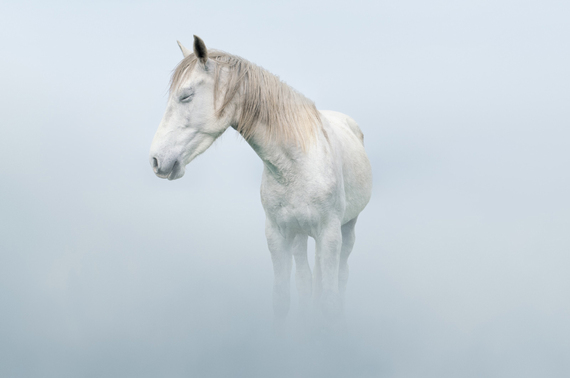 When we look in the mirror what we see is only a reflection.

This is how our mind works as well, as a projection. Trying to identify our self with this projection is like trying to become one with the reflected image on the mirror and look back to ourselves, expecting to find inside us the properties of the mirror we're looking at. When we apply the transcription of the outside reality back to our self, then we can only meet with a transcribed Self, one that was expressed and not experienced.

There is something indefinable flowing in the roots of existence. Not because its complexity cannot be perceived, but because its simplicity cannot be described. Every time we apply a concept it disappears from our eyes, for it is undividable and continuous, fundamental and primordial. It is the essence that preserves the substance of all things as they're projected in our mind, our maternal connection with the outside reality, that otherwise is bound to remain distant, hidden behind the reflective surface of our senses.

Man, has pursued for centuries the mysterious footprints someone left in the sand, until he realized that these tracks were his own.

When we're looking in a mirror our eyes instinctively focus on the maximum distance, not on the mirror's surface, which allows us to see clearly the reflected image. In this case the focal distance is the distance between our eyes and the mirror plus the distance between the mirror and the object we are looking at. We have to adjust our focus in order to observe the surface of the mirror and it may take a little effort, as our mind is challenged. This adjustment reveals the actual surface, the texture and structure of the mirror and in the same time it dissolves the image of the reflection. This example could accurately express our relationship with the outside reality. The reflective ability represents our senses and the surface upon which the image is shaped, represents our mind. Our mind creates an image for the world around us, but in the same time it multiplies the distance between us and the outside reality. It is a projection of our senses in our mind and the closer we look, the more we focus on the mechanisms of our own perception. Just like looking closer in a mirror, it's not the reflected image that gets magnified but the reflective surface. Every method we use to study the world around us, eventually becomes an introspection.

It's interesting to think of how much our ideas about the nature of matter has changed in our times. Some centuries ago determinism declared that everything could be explained rationally if we were able to interpret accurately the behavior of matter. Today, the developments in quantum mechanics have changed our view about the physical material world forever. In fact the physical material reality, isn't really physical at all. John von Neumann, the Hungarian physicist, approached such phenomena through an interpretation known as "consciousness causes collapse", referring to the observer effect, in which the act of observation influences the phenomenon being observed. Our means of perception influence the outcome of our observation, exactly the same way that the surface of a mirror influences the reflected image.

In the 3rd century AD, Diogenes Laërtius wrote a series of biographies about the Greek philosophers. In the seventh volume, dedicated to the Stoic philosophers, we can find a beautiful passage in the chapter about Zeno, the founder of the Stoic school in Athens during the 3rd century BC. There, Diogenes uses the word phantasia to refer to the reflection of the world to our senses. This Greek word means"appearance, image, perception", deriving from the word phainesthai, meaning "to appear", related to phos that stands for "light" and phainein which means "to show".

A phantasia is an imprint on the soul,
the name having been appropriately borrowed
from the imprint made by the seal upon the wax.

For the Stoic philosophers the soul is like a wax tablet and the object perceived is like a seal that impresses a copy of itself into the wax. Diogenes explained that for the Stoic philosophers, the soul is that which comes into contact with objects outside the perceiver by means of the five senses, which are called functions of the soul. The perception of an object by the soul through one of the five senses is called phantasia, "a visible image, a presentation". It was only during the later times that the word phantasia acquired the meaning "to imagine, have visions", related to the word phantasm, which means "an apparition, an illusion, a phantom". Eventually it became the word fantasy exactly the way we use it today.

The outside reality makes a huge impression to our consciousness. Everything that is perceived as a reflection to our senses belongs to this external world. Even our very own body is part of the outside reality, a physical presence sharing the same qualities with everything perceivable around us. We study the structure and functions of our body the same way we study the structure and functions of everything else. Our consciousness inspects our body, its presence, its appearance and its behavior, the exact same way that it examines the rest of the physical world. The fact that even our very own body is subject of observation by our consciousness is the key to unlock our soul from the confines of physical identity. Our consciousness can observe the behavior of our very own mind and physical presence, the effects of emotions, its reaction to pain or joy and every other aspect of expression. Just like examining our body in front of the mirror, our consciousness observes our physical presence and it's able to heal and nourish it. When we identify ourselves with our body or an idea, then we defy this healing ability, exposing our soul to trauma. This is the awareness of perception.

In another insightful passage from the same volume, Diogenes offers us the following lines. The philosophy of Stoicism thinks of Nature as a constant, forceful process of creation and Soul as its own consciousness. The words are revealing.

Nature in their view is an artistically working fire,
going on its way to create, which is equivalent to a fiery,
creative, or fashioning breath.
And the soul is a nature capable of perception.