"We are broke but we have Austria. " --Hermann Wilhelm Göring

In the damp dark streets of early morning Vienna, SS Gestapo Chief Heinrich Himmler's agents raced to find one of the biggest ideological enemies of the Nazi state--a 58-year-old Ludwig von Mises. A political economist and critic of the socialist state, von Mises narrowly managed to flee to Switzerland just as his would-be captors were closing in. 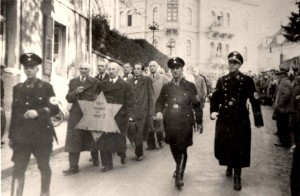 Himmler and his Nazi thugs had another reason to find and kill von Mises. It was 1938 and he and other enemies of Hitler's state--Jews, like von Mises as well as anti-socialists reformers--held private wealth the Nazi war machine desperately needed to keep running.

The Nazi Party rose to power in when their leader, Adolf Hitler was appointed Germany's Chancellor 1933. Hitler has achieved this position by hammering at two powerful themes: restoring the German supremacy robbed by the 1919 Treaty of Versailles, and "the Jewish question." Hitler dreamed of uniting "racially desirable" Germans in a new and powerful state. But this unison could not happen without first weeding out the rest of Germany (i.e. Jews as well as homosexuals, gypsies, and freemasons, among others).

The Jewish question referred to a European debate that had been raging for centuries regarding the appropriate civil, legal and political status of Jews as a minority within European countries. German economist and sociologist Werner Sombart had praised German Jews as positive contributors to German society for their entrepreneurialism and capitalism, but within the Nazi party this sentiment was considered radically left wing.

It was this climate--mere months after von Mises escaped Vienna--that eventually led to the infamous Kristallnacht--when entrepreneurs like Trudi Kanter were driven from their homes, lost their livelihoods, and in some tragic cases, were killed. Trudi, who's brilliant autobiography Some Girls, Some Hats, and Hitler tells the story of going from freedom and entrepreneurship to living under the oppression of Nazi Germany, lost her business almost overnight. But, how did the Nazi's target entrepreneurs for their theft? Why did they block entrepreneurship and free ideas? And, perhaps most importantly, how did their efforts to tax and seize Jewish wealth so quickly turn into a genocide?

Wealth Confiscation and the Nazi State
The Nazis considered German Jews "a foreign race"--but they were also very interested in their wealth. Anti-Semitism had a long history in Europe: it was largely influenced by the Christian belief perpetuated in the Middle Ages that the Jewish people were collectively responsible for the death of Jesus. Persecution of European Jews was widespread during the Crusades, beginning in 1095, when Jewish communities along the Rhine and the Danube were massacred. Due to this discrimination, many Jews adapted by turning to entrepreneurship and some had become quite successful by the twentieth century. Hitler pointed to their wealth in order to pit many economically stressed German citizens against German Jews. This was Hitler's first step in fueling anti-Semitism, long before he made a move against Jewish lives, as Götz Ally explains in his probing and well-researched study of Nazi economic policy, Hitler's Beneficiaries: Plunder, Racial War, and the Nazi Welfare State.

According to a study released in 2010 by Hans-Peter Ullmann, a Cologne history professor, Jewish wealth confiscated by the Nazis paid for roughly one third of Germany's World War II effort. Nearly 120 billion marks--over $17.4 billion today--was plundered from German Jews by laws and looting. According to Ullmann, the tax authorities under the Nazis actively worked to "destroy Jews financially." Even Jews who managed to escape Germany before the Holocaust had to leave part of their wealth behind in the form of an "exit tax."

Another critical piece to Hitler's rise in popularity was his promise to restore German power. The Treaty of Versailles had not only forced Germany to disarm, but had also stripped Germany of land that was turned over to neighboring countries. The ascension of the Nazi party to national prominence was meant to be a first step in rearming Germany for an attack on those neighbors that would take back that territory, and restore the nation to its former glory.

By 1934, Hitler had broken several key agreements in the Treaty of Versailles by increasing the German military to one million men. The treaty limited the German army to 100,000, and also prohibited German manufacturing of new military equipment, in which Hitler was investing heavily. Hitler had to solve the problem of how to pay for both the rearmament and the vast increase in government services he planned to use to fight raging unemployment and keep the beleaguered middle class on his side. 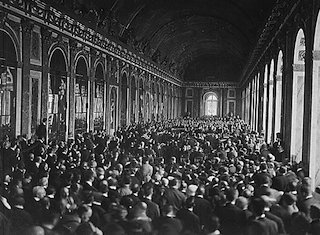 The Treaty of Versailles
(source)

With Hitler's approval, Göring developed a three-step plan to confiscate Jewish wealth. First, all Jews would be required to declare their wealth. If they hid any assets, they would receive an automatic ten-year prison term and have their wealth confiscated.

Next, Göring used this data to institute a 20% tax on Jewish wealth, raising millions for the government. With the military budget still growing, however, deficits continued to soar and Goering moved to step three: In 1938, a law was passed nationalizing all property owned by German Jews. 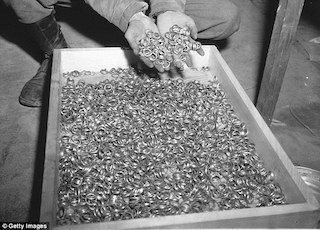 Feedback from his ambassadors in other countries, however, made Göring realize that Germany would be harshly criticized if perceived to be outright stealing the Jewish community's assets. That is when he came up with a diabolical plan to make it appear that German Jews were being treated fairly. In 1939, in return for their stolen wealth, the Nazis issued war bonds to the Jews that paid a small amount of interest, and would only be honored if Germany were to win the war that had begun on September 1, 1939 with Germany's invasion of Poland.

Having stolen most of the Jewish wealth, which prevented Jewish people from maintaining their businesses or starting new ones, the Nazis next declared that only specific pawn shops could be used by the Jews to sell their jewelry, which it was no longer legal for them to own. At these pawn shops, the prices were set far below market value.

Even with this grotesque theft from some of Germany's most productive citizens, the massive military buildup still required more money, so Hitler's government decided to impose a 50% surtax on most German groups. To avoid lowering the morale of the average German citizen, however, the Nazis made an informal but clear pact with the German people: If the Wehrmacht (the unified armed forces of Nazi Germany) were to successfully conquer and plunder other countries, the German people would not have to pay the tax. This was a clever move that consolidated German support for World War II and ultimately for the Holocaust, as well. 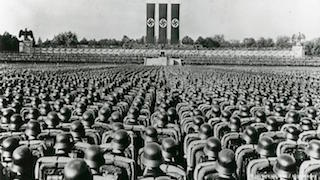 Once a country was conquered by Germany, its wealth was looted through confiscation and through taxes on its businesses. In France, the Germans seized the stock market and sold off portions of it to pay the bills of the war. Each country that was conquered was forced to remit most of their gold holdings to the German central bank. Another way the Nazis transferred wealth back to Germany was to raise the pay of German soldiers in a particular country while at the same time devaluing the currency of the conquered country relative to the Deutsche Mark. This handed purchasing power to the occupying German soldiers, who were encouraged by their commanders to buy goods to use themselves and to send back to Germany. The stores in the conquered country would be left with too few goods for its own population, driving up prices, starving citizens and in effect bankrupting the local economy.

German soldiers were encouraged to plunder and loot homes, businesses and farms. The rule was that anything that would fit into a postal bag could be sent back to their own families with no tax paid. In 1940, during the first six months of the Third Reich's invasion of Russia, German soldiers shipped 3.5 million bags of stolen property back home. 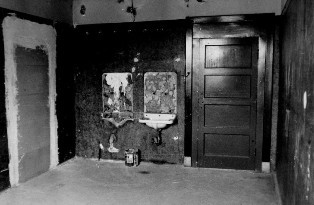 An apartment after being looted by Nazi soldiers
(source)

As a result of all these policies, as well as generous social programs back home, the average German enjoyed a higher standard of living and benefited directly from the systematic plundering of their own German-Jewish neighbors, as well as the citizens of occupied countries under the Nazi regime.

Sadly, once millions of European Jews had been stripped of their wealth by the Reich, they became expendable to the Nazis and Hitler's "final solution" to "the Jewish question" was launched. Three years later more than six million Jews had lost their lives to the Holocaust; so did other "undesirable" minorities, including freemasons and gypsies.

By studying the economic decisions that led up to the Holocaust, perhaps we can learn from this horrific chapter in world history. In Part 2, I will explore similarities between how the Nazis used taxation to disempower German Jews before launching into full-blown genocide and strikingly similar economic policies enacted by the Khmer Rouge in Cambodia before they, too, became genocidal and massacred three million Cambodians between 1975-1978.