How many presidential candidates have you actually met in person? Not that many. A large majority of us -- the electorate -- meet our candidates through media. Whether it is watching a debate on television, scanning social media commentary from friends, or reading political analysis in a newspaper, nearly all of the evidence the presidential electorate utilizes in its voting decisions is delivered by media. If we are to have a chance at understanding how this evidence leads to a decision on Election Day then we must zoom in on the cycle of evidence and decision formation: did a campaign commercial or a debate appearance sway the voter's choice? Did either compel the voter to donate to the candidate's campaign or PAC?

The neuroscience of decision-making during presidential elections is a difficult problem. Nevertheless, armed with an experimental approach and analysis methods that aim to capture the way voters experience the candidates, I am leading a study at the Harmony Institute that begins to tackle this problem. The Harmony Institute is a non-profit research institute specializing in the impact of media on social issues. We are observing eligible voters' neural responses as they watch excerpts from the presidential debates held within each party. After viewing a live debate excerpt, the voter is given a choice as to which candidate he/she prefers on the viewed material. Then, the voter is asked whether he/she would like to support that candidate by a donation, a 'Like' on Facebook, or a one-time vote.

The holy grail of such an experiment is to find a neural signal captured during the preceding video clip that predicts the voter's choice. Right now, scientists are far from that capability. However, the first look at our results paints a fascinating picture of what the voters comprehend on a neural level. In particular, there are stretches of time when most of the voter population listens carefully to what the candidates are saying. Other times, it's as if the candidates were speaking another language: most of the voting viewership is either not listening or not comprehending their speeches. Could there be certain talking points that grab audiences more than others? Could candidates use this capability to their advantage? This is one thing we are measuring with the neural signal obtained by electroencephalography (EEG) in these experiments.

There is another important point to consider: no one hears the candidates in a vacuum. There is a preponderance of commentary from all sources -- official and trivial -- that shapes the evidence-decision cycle. How do we account for this in our experiments? Does the commentary actually have an effect on voter decisions? We don't know yet because we are still collecting the data during this primary season. But we have made sure to capture live neural and decision response as the debates unfold. This allows us to have a perfect control condition against which to judge a follow-up experiment with the same debate excerpts. Having made a live recording, we can more clearly see if voters' choices are a function of what the candidates actually say, or whether the choices are steered by commentary. 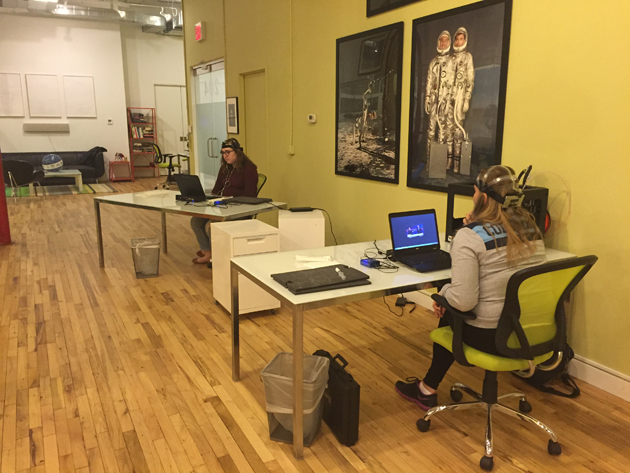 Do the decisions hold constant in the voter population? Does the voter still like Trump on foreign policy after follow-up commentary that critiques his plans? Will the voter still pay attention to Clinton's immigration policy statements in a debate when subsequent commentary has poked holes in it? These and other questions are on the horizon as we continue with this work.

Our aim here is not to find where election decision-making happens in the brain. That is a fool's errand. Our aim and capability is to measure when the voting population responded on a neural level to what a candidate said. As much as we comment on Facebook, or donate to a PAC, or advocate against a candidate in conversation, at the end of the day -- on Election Day -- it is only one of us in the voting booth with no one around to watch how we choose. The choice we make will be a function of the media evidence accumulated up to that point. Then the decision happens, first on a neural level and then as a behavioral event when you physically select the candidate's box. We're just starting to measure how that happens. Stay tuned for more.