Last night, as I was updating my Facebook status, I briefly considered a post wondering how long it would take before Pat Robertson made some monstrous insinuation about the earthquake in Haiti being God's will. I remember thinking, No, even Pat Robertson wouldn't exploit a tragedy of this magnitude--a tragedy that, as of this writing, has claimed over 100,000 lives.

Even Pat Robertson would have seen the pictures of the broken and mangled bodies of children, their limbs bloodied, crushed by fallen concrete. Even Pat Robertson, T-1000 Pharisee though he might be, would have a vulgarity threshold even he wouldn't cross. Surely a natural disaster in one of the poorest countries on earth would be beyond the pale, even for him, especially given Christ's edicts relating to the blessedness of the poor.

As it happens, I should have taken bets on "when" instead.

On the 700 Club today, Robertson did what he does best: he perverted a tragedy to suit his religious agenda. In his best creepy Evangelical wizard voice, he intoned that the people of Haiti had brought this catastrophe on themselves by compacting with the Devil.

"Something happened a long time ago in Haiti and people might not want to talk about. They were under the heel of the French, you know Napoleon the Third and whatever. And they got together and swore a pact to the Devil. They said 'We will serve you if you will get us free from the Prince.' True story. And so the Devil said, 'OK it's a deal.' And they kicked the French out. The Haitians revolted and got something themselves free. But ever since they have been cursed by one thing after another."

In the aftermath of 9/11, CBN aired a dialogue between Robertson and the late Jerry Falwell in which Falwell asserted that the ACLU, abortionists, feminists, gays, and the People For the American Way, were responsible for the devastating attacks on the Twin Towers. Robertson concurred with Falwell, and offered up a prayer flagellating Americans for--you guessed it--bringing 9/11 on themselves.

"We have sinned against Almighty God, at the highest level of our government, we've stuck our finger in your eye. The Supreme Court has insulted you over and over again, Lord. They've taken your Bible away from the schools. They've forbidden little children to pray. They've taken the knowledge of God as best they can, and organizations have come into court to take the knowledge of God out of the public square of America."

Robertson would say something similar when Hurricane Katrina devastated New Orleans. He proposed that then-Supreme Court nominee John Roberts "could be thankful" that the tragedy had "done him some good" by providing a backdrop that would intimidate Democratic senators who might otherwise question Justice Roberts' views on abortion and other conservative deal-breakers.

Haiti is one of the poorest countries on earth, and its heroic survival in the face of horrors--the likes of which Pat Robertson could only imagine enduring in his worst nightmares--has been nothing short of awe-inspiring. Haiti was the site of the only successful slave revolution in human history. Between 1791 and 1804, Haiti's slaves threw off the shackles of French rule, a rule whose barbarous cruelty shines even in the historical annals of slavery. Their history, in the two hundred-plus years since they were emancipated from France has been fraught with extreme poverty and extreme internal political turmoil.

The estimated death toll from the magnitude 7.0 quake that rocked the country on Tuesday continues to soar even as I write this. It's reported that the Roman Catholic Archbishop of Port-au-Prince, Joseph Serge Miot, is among the dead, as reportedly is the chief of the UN mission in Haiti, Hedi Annabi. Aid organizations, both religious and secular, have mobilized the world over, recognizing this as a human catastrophe on par with the tsunami of December 2004. Most people of genuine faith are turning to prayer at this moment, and hopefully to their pocketbooks as well.

What's Pat Robertson doing? Writing horror stories in the blood of innocent victims of a monstrous natural occurrence--again. While women scream for their dead children, Pat Robertson is telling apocryphal tales about how the Haitians are suffering unimaginable pain and despair because they "swore a pact to the Devil" in order to be freed from the horrors of slavery under "you know, Napoleon the Third and whatever."

Perhaps in the aftermath of yet another grotesque pronouncement from this man who claims to speak for God, while blaming victims of a natural horror for their own misery, it might be time for America to take a long, hard look at the multi-billion dollar religion industry (which is largely tax-exempt) and ask itself if it still wants to invest people like Pat Robertson and his evangelical corporation with anything but jaundice.

It's too much to expect them to recall what their own Bible says about false prophets, or to see Robertson in the context of Isaiah 29:13: The Lord says: "These people come near to me with their mouth and honor me with their lips, but their hearts are far from me. Their worship of me is made up only of rules taught by men."

But if those of us who are outraged by Robertson's foulness chose to give an extra ten dollars to Oxfam or the Red Cross as an expression of that outrage, perhaps some small good can come out of it.

Because now is not the time for anything but goodness.

And then, when we've really done all we can, perhaps we can finally have that honest discussion about religion, and the role of people like Pat Robertson in American popular culture. And perhaps then we can discover who's really made a pact with the Devil. Lets hope it isn't us. 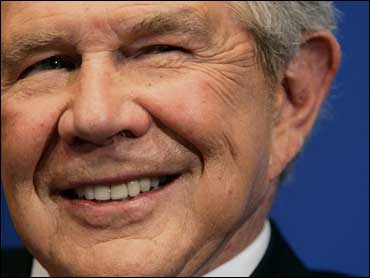