My sister, Karen, died on 9/11, working at the World Trade Center; and hence, I visited the new Museum, which opened this week, with my family.

All visitors to the museum must first pass through airport-like security -- removing and dumping into plastic trays all metal objects, as uniformed security officers bark instructions to place the trays on conveyor belts. We entered whole body-scanners, raising our hands above our heads, or metal detectors. "They're treating us as if we were the terrorists," my mother observed.

Once inside, we descended dark stairs to the exhibits, sprawling over three acres -- entirely underground. The exhibit starts with the morning of 9/11 -- a large map of the U.S., showing the hijacked airplanes' routes. From overhead speakers, voices recorded on that day describe the shock and horror.

Down ramps, we pass metal girders, now mangled, that once held up the magnificent soaring edifices -- once the tallest buildings in the world. We step down more stairs, until we are standing on the primordial of New York City bedrock on which the buildings stood -- literally Ground Zero.

In a room at the site of the South Tower, portraits of all the victims fill the walls. An electronic touch screen evokes each person with a few photos and the voice of a loved one speaking a few paragraphs about the deceased. We heard the recording of one of my surviving sisters -- Karen's identical twin, Donna.

At the site of the North Tower, exhibits display newspaper headlines from that morning, and the times each plane hit, and each tower fell. Familiar videos endlessly replay of the jets smashing into each edifice, smoke and flames billowing out, and the towers collapsing like houses of cards. We pass crushed fire trucks and light posts, and the ripped side of one of the planes. Beside shining metal models of the buildings, descriptions of their novel engineering features cover the walls.

But the most haunting images appeared only later, after several hours (one could have spent much longer), reading just a fraction of the hundreds of placards and thousands of biographies. On a tiny screen, tucked along the side of a dark narrow passageway, as one travels from one large space to the next, a short video clip plays of two of the hijackers passing through airport security on that fateful day. Clean cut, in dress shirts and slacks, each with a piece of carry-on luggage slung over his backs, they leisurely stroll through metal detectors, just as we had upon entering the building, looking like any other airport passenger. A security agent runs a metal-detecting security wand over one of the hijacker's bodies. Another guard rubs a circular disk over the other man's luggage, passes the disk through a machine, and then lets him go. The two passengers amble off the screen, to hijack a plane and kill thousands of people and themselves. 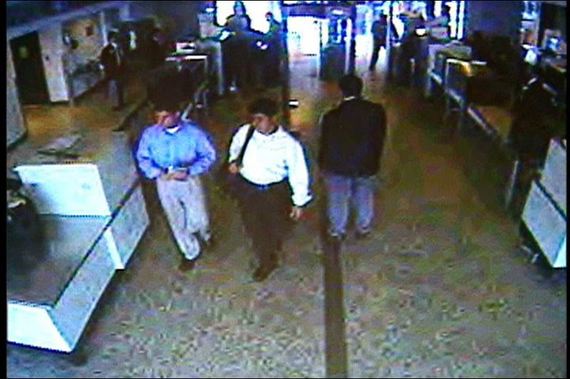 I stood transfixed, watching this film over and over. What were these two innocent-appearing men thinking, and why? "America is a godless country," a passage from an al Qaeda training manual states on a nearby wall, "The main mission...is the overthrow of the godless regimes." By killing thousands of innocent people? A single small wall placard mentions Islam, pointing out that terrorists comprise only a minute percentage of all Muslims. But the larger and more basic questions loom large, wholly unanswered -- why 9/11 happened in the first place, why people, in the name of fundamentalist religion, murdered thousands of fellow human beings, and used and distorted religious precepts in malicious ways, and how easily this might happen again?

Close by, a handful of small wall signs only now suggest a fleeting glimpse of the backstory -- who the hijackers were, and how the U.S. government responded to them.

The CIA had photographed two of the hijackers in 2000, meeting with al-Qaeda associates. "Multiple American agencies received information about that meeting," we read, "None placed [them] on a terrorist watch list. The two men entered the U.S. undetected days later."

Beside a July 10, 2001 memo, we read: "Phoenix, Arizona-based special agent Kenneth Williams...recommended that the FBI collect visa information on foreign students enrolled in US civil aviation schools. He suspected those students might be connected to terrorist groups including al Qaeda."

But the text suggests excuses: "FBI field offices issue thousands of communications daily...Williams uncovered no specific leads related to 911, however, and marked his own memo as 'routine.'" But did he try to find other leads? We get only small morsels of information -- a few clues. The whole story is largely left untold.

A small placard adds, "The 9/11 attacks highlighted gaps in communication and information sharing between law enforcement and intelligence agencies. Later, investigations suggested that the 9/11 attacks might have been prevented if federal agencies had exchanged information more fully. Restrictive federal laws, lack of clarity about the rules, and insular agency cultures inhibited communication and collaboration." Yet gaps in communication between insular federal entities clearly persist.

From Libya to Syria to Iraq and Iran, the Middle East is arguably more of a powder keg than in 2001. In an age in which the NSA monitors our emails and phones calls in the name of national security, how much response to potential threats is appropriate? Who should decide and how?

The displays wonderfully commemorate those who perished, but those hellish hours, which fill almost the entire museum, are only part of the tale. Among the thousands of pages of text here, only a few address the crucial underlying questions of why this occurred; how easy it is to misunderstand and demonize others and their religion; how flimsy our safety may ultimately be; how the U.S. responded in Afghanistan, Iraq and Abu Ghraib, and why such devastation persists.

Over its acres, the museum could inspire us not only to remember the deceased -- which it does well -- but to ponder these broader issues more, adding to its narrative of victims and heroes, by exploring these larger contexts and dilemmas, broadening our understanding, and moving us to consider far more fully these larger questions about the nature of belief, religion, tolerance, evil and hatred, and ways of perhaps preventing such atrocities in the future. The exhibits would not be able to cover these issues exhaustively, but could provide a unique and important opportunity to have us reflect on these larger questions. Doing so, could potentially help prevent future such attacks and promote peace, even if in small ways.

The events of that single day did not occur in isolation. The more we can contemplate not only those harrowing hours, but these wider contexts, the more we can help avert such horrors. My sister would have wanted that. Doing so would honor her memory most.