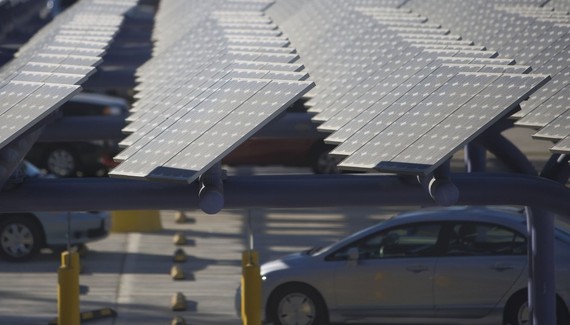 Impact investing may have gotten off on the wrong foot, with venture-capital style private equity funds that generally have to be liquidated after 10 years.

A recent example is i(x) Investments, the investment company backed in part by Howard Buffett, the grandson of Warren, whose Berkshire Hathaway is structured, no surprise, as a holding company.

"The world is going distributed," says Panos Ninios, True Green's co-founder and managing partner. "The common goal here is to change the mindset of institutional investors in distributed power generation."

Trevor Neilson, the chief executive of i(x), says his company expects to allocate $150 million to True Green's projects this year, and "significantly more capital over the coming years." The company is building analogous partnerships in agriculture, real estate, water and other areas.

"You look at any one of those industries and these are assets of infinite duration," Morley says. "Why would you fund things like that with a one-year lock-up hedge fund or even a 10-year fund? You'd much rather have capital in perpetuity -- an investment company that holds assets for a very long time."

The company's investment capital has not been raised yet, but Nielsen and Morley say i(x) is structured to appeal to institutional investors such as sovereign wealth and pension funds, as well as to family offices of high-net worth individuals. In a world of near-zero returns, steady yield of even four or five percent returns with upside potential when the economy reflates is "the holy grail," Morley says.

"There's a major rotation around the world toward impact investment," he says, with major yield opportunities in renewables, agriculture, real estate and other sectors with low correlations to the equity markets. "Depending on the industry, you could say these are serious growth businesses. You're going to have alpha growth moments in businesses that don't correlate. If you're a pension fund and need to invest for the long term, or an endowment or foundation and have real cash needs, that's an attractive behavioral profile."

"We're talking about real assets, long-lived, current-income oriented, productive -- why would you necessarily liquidate that in 10 years?" asks Dave Chen, CEO of Equilibrium Capital, based in Portland, Ore. As the firm builds investment strategies in agriculture, timber, wastewater and other areas, he says, it is exploring: "How do we create receptacles that are long-lived, give investors the opportunity to have semi-liquidity and wrestle with this fact that we have accumulated very valuable assets and we don't want to necessarily exit them?"

Equilibrium last year closed a $250 million ACM Permanent Crops Fund, which is now a large organic blueberry producer and is also developing hazelnut, table grape and citrus farms in California, Oregon and Washington. Equilibrium's team manages not only the financing, but the growing, processing, packaging and marketing of the crops, many of them organic. Equilibrium's wastewater and biogas strategy, Wastewater Capital Management, provides project capital to design, build and operate agricultural and municipal biodigesters. (Hear Equilibrium's Dave Chen on "Pension Funds Tipping Toward Sustainable Investments" on ImpactAlpha's Returns on Investment podcast.)

True Green's ambitions go beyond solar to all forms of distributed power generation, including combined power and heat generation, battery storage and biochemicals. Ninios says True Green identifies project developers and helps them lower their cost of capital by improving their legal and financial structures, along with engineering and getting them ready for low-cost project finance.

"There's very little capital chasing this opportunity," he says. "We buy projects in reasonably early days and we make them bankable. We finance them and we own them."