It's a simple question: Which future do you want? If you chose New Networks, click here to write to the FCC to deny the AT&T FCC Petition or to read more: 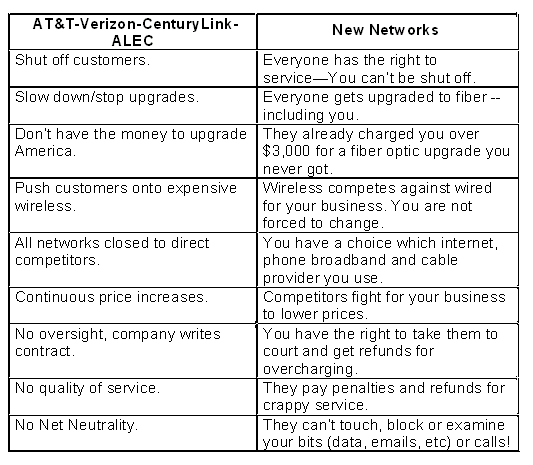 AT&T, Verizon and Centurylink, who are corporate sponsors of the American Legislative Exchange Council (ALEC), have declared war on the American public. They have created a new plan to establish new digital "dead zones" and remove a consumer's right to communicate. (Of course they don't claim that will happen.)

AT&T has filed a petition to start this process, while AT&T et al with ALEC have been going state-to-state to remove all regulations -- and laws have been changed in 23 states and counting. New Networks filed to have the FCC not only deny AT&T's requests but to start investigations.

But it gets worse: The telecom companies are tightening their grip, eroding your rights:

If you still want what the phone companies and ALEC are offering -- good luck with that.

For everyone else who wants a future of jobs, economic growth and, oh yes, companies that actually want to compete for your services and want America to have fast broadband, internet for everyone at reasonable rates, join us.

If you chose New Networks, click here to write to the FCC to deny the AT&T FCC Petition or to read more: