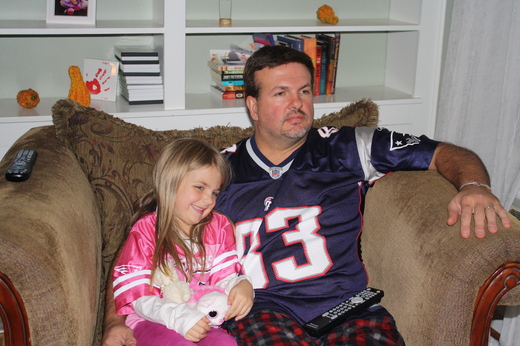 Last week, I watched Ravens-Patriots game with my 6-year-old daughter. We shared the ottoman together with a giant bag of Doritos. She's in first grade, and enjoys watching the games as much as I do. I noticed that she was not wearing the pink Patriots jersey her father bought her, so I asked her why.

I raised a suspicious eyebrow and she added, "...it's kinda itchy."

Jersey or no jersey, the Patriots were still down, 14-0, in the first quarter. Both mother and daughter were frustrated.

We've been here before. Literally, as any New Englander can tell you. Such a mood of complete irascibility has seldom been observed in my house. It's frustrating to watch the team you love get outplayed on their own field.

"W-H-Y are they playing so badly?" My daughter asked in a voice that sounded like a deathbed rattle. I giggled and then realized this was not a rhetorical question. She actually wanted an answer.

So, what do I say? Do I answer with, "Both the offense and defense are just playing lousy! They're getting tripped up by their own mistakes. They're just getting outplayed."

Those answers would never fly with my daughter. She likes to analyze the world. She learns through stories, and I suddenly remember that I have a perfect one to tell her.

We muted the endless barrage of Tostitos and car commercials and I read her one of my favorite passages from the book I co-authored, The Learning Habit. This is a story about Doug Baldwin Jr.

Doug Baldwin Jr. was a wide receiver for the Stanford University football team. His lifelong dream was to be a professional football player. An outstanding wide receiver, he nonetheless got very little playing time during his first three years at Stanford. That changed his senior year--when his attitude changed:

[Due to an ankle sprain] my starting role was downgraded to backup. When I did step back on the field, it was with a chip on my shoulder. I was angry. How could I lose the starting role that I worked so hard for to an injury that was out of my control?

My focus was in the wrong place. While being angry and upset, balls slipped through my hands during practice, routes were sloppy and easily covered by defensive backs.

I was searching for answers to why things were happening to me, but I never stopped to think how I could get myself out of those situations.

[I realized that] I had to stop worrying about things that were not in my control. I had to start controlling the things that I could and have faith that everything else would work itself out. I focused on responding to obstacles in the right way. I focused on overcoming them and not letting them hold me back.

"So are the Patriots focused on the other stuff right now, being angry?" my daughter asked.

"Yup. If they focus only on the part they control -- the way they are playing -- on what they practiced -- they'll come back and have a strong game.

"Focus on yourself!" My daughter chanted to the screen. And you know what? They actually did.

The Patriots played what many consider one of the most exciting games in NFL history.

Baldwin's statement is the perfect example of the perspective necessary for developing a habit of responsibility, and a great story to share with children before the Superbowl.

Once he stopped worrying about things that he did not control (coaches' decisions regarding his playing time) and instead started taking responsibility for what he actually did control (the way he was playing), everything changed for this outstanding scholar-athlete.

I'm positive that's why the Pats won last Saturday... still, my daughter and I agree she probably shouldn't wear her pink jersey on Sunday.

Portions of this article are excerpted from The Learning Habit by Stephanie Donaldson-Pressman, Rebecca Jackson and Dr. Robert Pressman by arrangement with Perigee, a member of Penguin Group (USA) LLC, a Penguin Random House Company, Copyright © 2014 by Good Parent, Inc.