I read "The China Study: The Most Comprehensive Study of Nutrition Ever Conducted And the Startling Implications for Diet, Weight Loss, And Long-term Health" in 2007 and found its scientific conclusions staggering: if men want to avoid prostate cancer they should avoid eating meat and if women want to avoid breast cancer they should avoid drinking cow's milk, dairy products.

This week in a 6 to 3 vote the Supreme Court ruled to save the health care law that will likely define President Obama's legacy. The Affordable Care Act authorizes federal tax credits for eligible Americans, but what if spending $3.8 trillion dollars on healthcare per year could be alleviated simply by people making healthier scientifically informed decisions about nutrition?

In 2011 the film "Forks Over Knives" shocked viewers with its revealing information about the connections between what we eat and our long term health outcomes.  Like climate change, due to the power of the milk, meat and egg lobbies the debate rages on about eating a plant-based diet.

But a new documentary continues where "Forks Over Knives" left off: "PlantPure Nation" presents the compelling story of three people on a mission to make a science-based case for the health benefits of eating a plant-based diet. The documentary highlights how corporate lobbies have perpetuated skepticism and supported the dairy, beef and egg industries.

Noted biochemist Dr. T. Colin Campbell, co-author of "The China Study," is featured prominently in "PlantPure Nation," which is directed by his son Nelson Campbell.  The film follows their efforts in the Kentucky Legislature to introduce a pilot program that would document the health benefits of a plant-based diet in a state with one of the highest levels of childhood obesity in the nation.

However, once the bill goes into committee an intense debate waters down the bill and it fails.  Undaunted, Nelson takes the pilot program concept back to his hometown of Mebane, North Carolina where they enroll a cross-section of residents including a couple who run a cattle farm.  The group agrees to participate in a 10-day "Jumpstart" program with freshly prepared plant-based meals and before and after biometric testing.  The results are astounding.

"PlantPure Nation" presents a compelling case and offers a simple solution to pervasive health conditions such as heart disease, diabetes and obesity.  This film is part of a grassroots movement that will hopefully inspire people to make healthier, scientifically based decisions about how they fuel their bodies. 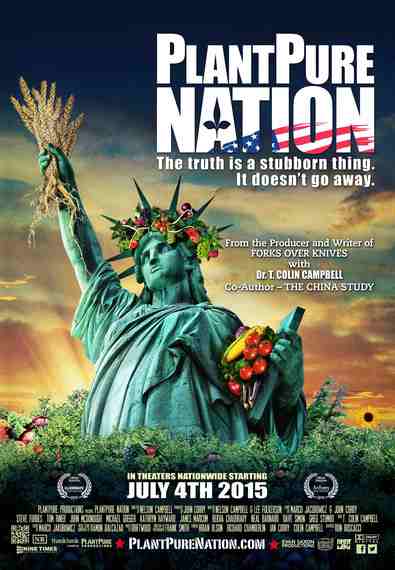