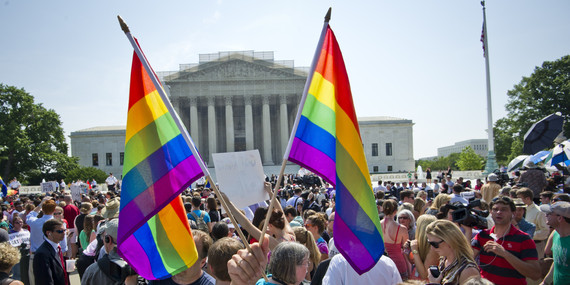 I was at mosque last night to have dinner and pray for Ramadan. It is a special time for communities to reunite, and mosques are the most popular places for families to get together when the sun goes down to break their fast and enjoy an iftar dinner first, then pray extra prayers shoulder to shoulder to show thankfulness to God.

In the chit chats at the dinner table, most members of the mosque brainstorming about the historic decision of the US Supreme Court's on June 26 making same-sex marriage legal around the nation. While some of them were recalling in the Qur'an, the story of the people of Loot criticizing the decision one said:

"Do you know there is a gay Imam? Maybe we should learn more about the issue!"

Actually, the issue has dominated conversation every where in the United States. Although gay marriage has been legal since 2003 in Belgium and is legal in 20 countries from Canada to New Zealand, it is still a subject that cannot be touched in many countries in the world, and it seems nothing will change quickly or smoothly in the US, either.

The possibility of using the theory of nullification, which means that states can ignore federal laws or pass laws that supersede them, is being discussed among conservatives. Experts agree that nullification is not constitutional; nevertheless, across the country some officials who are in charge of officiating weddings and issuing marriage licenses are dealing with a dilemma.

For example, in Texas, Hood County Clerk Katie Lang announced in a statement posted on the county clerk's website that she will not issue marriage licenses to same-sex couples because it conflicts with her religious beliefs. She declared that it is her right not to issue same-sex marriage licenses. Texas is not the only state to show resistance to the Supreme Court decision.

Obviously it is a new challenge for religious authorities in the US. Americans of faith have both conservative and liberal wings that interpret the issue differently. While some consider the Supreme Court ruling a civil rights victory, some see it as an obstacle, based on their religious beliefs. Actually, the next big step will be to see how religious institutions respond and if they comply with the new ruling regarding issuing marriage licenses.

Yes, the evolution of public opinion in the US on gay marriage has moved quickly in the past few decades. But the change in thinking didn't come from a theological and moral debate. It came from a growing exposure to gay people as friends, associates and family member.

Acknowledgment of the existence of homosexuality was a step that prepared the way for the acceptance of gay marriage. However, we don't know if there will be a shift on the theological level that would allow many religious communities to feel comfortable anytime soon.

I haven't come across any statistics showing how Muslim Americans approach the topic of gay marriage, but my experience tells me that there are diverse opinions about it. Actually, even though gay relationships are punishable with the death penalty in Iran, Mauritania, Saudi Arabia, Sudan and Yemen, liberal Muslims in the US note that the Quran doesn't say to punish homosexuals and there is no case of the Prophet Muhammad banning homosexuals; they say punishing homosexuality is mostly based on culture and pre-Islamic laws. Still, accepting the Supreme Court ruling of last week legalizing gay marriage might be a new challenge to Islamic communities in the US. It might be a slow process, if not rejection, of accepting a gay lifestyle and then same-sex marriage, much like Orthodox Jews have been slower to accept the notion than Reform Jews.

Actually, we should acknowledge that the latest US Supreme Court decision approving gay marriage is a reminder to the US government of its responsibilities to treat all of its citizens equally. However, based on the very same fundamental point of view, we can easily say that any religious community has the right to reject or accept the new decision based on their respective faiths. As long as they don't harm or discriminate against each other, both sides can live happily in a fair way.