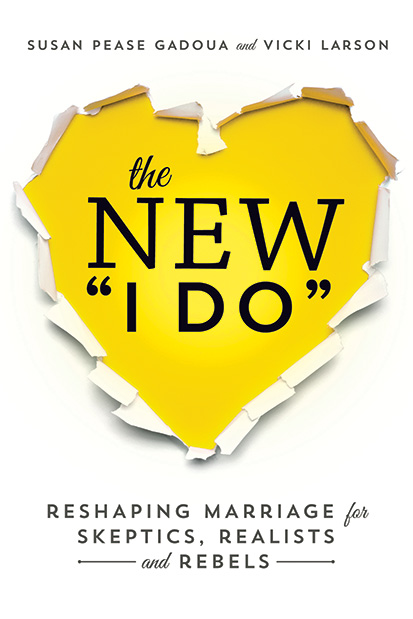 "Marriage as we know it is dying." So begins chapter one of therapist Susan Pease Gadoua and journalist Vicki Larson's new book The New I Do: Reshaping Marriage for Skeptics, Realists and Rebels, which challenges readers to consider alternate marital agreements in a world where lovers live together without tying the knot, more couples are having children out of wedlock and about half of all marriages end in divorce. "Rather than continue to encourage people to cram themselves into an old model that isn't working for many -- about one out of two marriages ends in divorce -- we want to acknowledge what's already happening and encourage you to think about new ways to marry," the authors write. The book, which hit shelves in late September, offers up seven models of alternate marriages for modern couples to consider. Below, an adapted excerpt about open marriages.

Bryce readily admits that he isn't cut out for monogamy. When he met Dana, he was thrilled that she was open to inviting another lover into their bed. While they were dating, this couple in their thirties had threesomes, and they even swapped partners on their wedding night six years ago.

In their first two years of marriage, the Pennsylvania couple had sex with others together. Then they talked about having sex with others separately. They felt like they were in a good place, that they trusted each other, and had confidence to explore. But like many others in open relationships, they had rules--the sex was always safe, there were no sleepovers, and every arrangement was to be agreed to beforehand.

Their extramarital romps are just about sex, period; they're not looking to forge relationships and explore deeper intimacy with others. Their goal is to recognize and celebrate each other's needs. "We want each other to be happy, and we know sometimes either one of us might want to have a sexual experience with somebody else that would make us happy. For me, that's what it's all about," Dana says.

What about you? Where would you draw the line on celebrating your partner's sexual needs and happiness--or your own? Most people don't question whether they're really suited for monogamy or not, as Bryce and Dana have. Even though people today are growing up in more diverse families than ever before and are much more open to and accepting of broader views of gender and sexuality than generations past, society still tends to view non-monogamous relationships negatively. Just look at the language that's used to talk about it. Those who engage in it are either promiscuous, putting themselves and others at risk of sexually transmitted diseases, or cheaters, with a breakup being the expected outcome once an affair is discovered. It's all about diseases, betrayal, secrecy, and deception.

There are scant positive models of healthy non-monogamous relationships, and so monogamy is generally not considered a choice but a given. Once a couple commits to each other, sexual exclusivity is expected and assumed--for now and forever. Is that a reasonable expectation? Is monogamy willingly embraced or just endured?

Brad and Kira, who got married in their early twenties, have also learned valuable lessons from their foray into non-monogamy. Less than two years into their marriage, Kira felt a strong attraction to a coworker. It wasn't much of a surprise to Brad because Kira had been a virgin when the Pacific Northwest couple met in college.

It was Kira's suggestion that they open up their marriage. Having an affair wasn't an option. She didn't want to hurt Brad--she loved him--and she didn't want to lie to him. She had seen how infidelity damaged her own family growing up. So, she read the writings of philosopher Bertrand Russell, a proponent of open marriage, and found the language to suggest that they bust free from monogamy.

After their exploration ended, Kira says she realized how happy she is to be in a monogamous relationship. Juggling schedules took a lot of work, and, a few times, she felt like she was becoming emotionally attached to her lovers, which "seemed kind of dangerous," she admits.

Still, they believe there was something incredibly brave and empowering about their decision; a "badge of courage," is how Kira describes it. They learned that they could make up their own rules and take risks in their relationship, and, frankly, doing something different than the mainstream together--without any deception--was exciting.

"Our sex life was better because we felt invigorated," Brad says. "We found each other very compelling because we were both embarking on this experiment and it takes a certain kind of bravery, and we found that attractive in each other and ourselves."

Bella also was a virgin when she met Ted. They married when she was just twenty, as many women in the South do. Thirty years into their forty-five-year childfree marriage, she experienced a series of family deaths. Then 9/11 happened. The fragility of life startled her, and she began to reflect on the things she missed out on by marrying so young.

They went to a few workshops on threesomes, and one day found themselves in bed with another man. Then they went to a sex club as part of an intimate group of friends and had a few more threesomes, together and separately. For a trip abroad, Bella got a hall pass and spent a glorious night with a much younger man.

But Ted never really felt 100 percent comfortable with their experimentations. "He's a one-woman man," Bella sighs. So after a little more than two years of sexual play, they returned to monogamy.

Still, their brief journey into an Open Marriage transformed their relationship for the better. "It's actually made us more open to other kinds of nonsexual experiences. We do a lot more social stuff than we used to do," Bella says.

For whom does consensual non-monogamy work? Kira says it's important to have confidence in yourself, believe in what you're doing, and know your boundaries. Being outgoing helps.

"For a lot of people, it doesn't even occur to them that they can be anything other than monogamous, and they get into a situation and then realize they maybe feel differently. I also feel monogamy can be dangerous even without sleeping with other people. Just having a sense of your own sexuality, being attracted to other people, being able to flirt with other people; when you can't do that, it just shuts down a part of you. It changes who you are in your marriage and so long-term, that can be really damaging," she told us.

Adapted excerpt from The New I Do: Reshaping Marriage for Skeptics, Realists and Rebels by Susan Pease Gadoua and Vicki Larson, with permission from Seal Press, a member of the Perseus Books Group. Copyright © 2014.