"We don't want your 'direct payments.' We don't want your welfare. We want self-sufficiency," said Lance Morgan, CEO of Ho-Chunk, Inc., a 16-year-old, 1,000-employee company that's lifted his community, the Winnebago Tribe of Nebraska, from 65% unemployment in 1994 to full employment today and what Morgan calls "a shot at a middle-class life."

The success emanates from a gleaming corporate headquarters, shown below, in the rolling hills of eastern Nebraska. There Morgan, a Harvard-trained lawyer and tribal member, runs a range of enterprises, some of which include federal-government sole-source contracts for telecommunications projects, support services in Iraq and Afghanistan, construction, and more. The company obtains the negotiated agreements via the tribal portion of the Small Business Administration's 8(a) program for disadvantaged and minority businesses. Through the program, all Native firms together receive about .7% of this type of federal business, most of which originates from the Defense Department. Adding in non-8(a) contracts brings the Native share to 1.3%.

Thanks to Ho-Chunk, Inc., tribal members participate in the American dream in ways not imagined a generation ago, with blue- and white-collar jobs, home ownership, and retirement accounts. Along the way, Morgan has been lauded by the Small Business Administration, the State Department, and business magazines. However, his achievement may soon fade, and fewer tribal members may be receiving paychecks.

Instead, they may be expecting "direct payments" from the federal government -- presumably a new form of welfare -- that Senator Claire McCaskill (D.-Mo.) suggested to the Washington Post as an alternative to tribally owned businesses. McCaskill is a member of the Senate Armed Services Committee, with authority over Defense Department spending. If she has her way, Morgan said, hundreds of Ho-Chunk, Inc. employees will be laid off, kids' college scholarships will be put on hold, and tribal housing-assistance programs will be cut.

McCaskill fielded the direct-payments idea in a series of Washington Post articles that sometimes anticipate and sometimes shadow the senator's activities, with policy creating news, and news creating policy. McCaskill, and the newspaper, are sharply critical of Alaska Native Corporations (or ANCs), created to settle indigenous land claims, with Native people as individual shareholders. In July 2009, the Post, also referred to as WaPo, got in an early shot at the highly successful corporations, warning that "long overdue scrutiny of ANCs is about to get intense." In late September and early October of this year, the paper published a rapid-fire succession of pieces, then announced on Oct. 7 that McCaskill would soon introduce legislation to "target" the Small Business Administration's tribal 8(a) program. When McCaskill's press release appeared the next day, Oct. 8, it noted that the newspaper had confirmed her findings and she would move on the legislation.

In the Post articles, McCaskill appears to be going after just ANCs. She calls them wasteful and says their shareholders receive from them, on average, only about $600 annually. Jason Moore, spokesperson for advocacy group Native 8(a) Works, disputed this figure, saying she double-counted shareholders, who can have shares in multiple corporations. Further, Moore said, only some ANC work is 8(a)-related, but McCaskill's calculations assume all is. Finally, some shareholder groups forgo cash in favor of community improvements, including multi-million-dollar scholarship funds, rendering McCaskill's arithmetic even less meaningful. (For more, see a line-by-line analysis of Washington Post assertions by the Native American Contractors Association, a trade group.)

The articles offer consolation prizes. McCaskill pities Native people, saying, "your heart breaks for the many poor natives [sic] who are suffering still." And their cultures are "rich," though they are poor. How poor? They have no indoor plumbing and pee in "honey pots." Bright photographs fetishize hardship -- happy Natives fishing, pensive Natives in messy houses.

In the end, the hue-and-cry the Post raised enabled McCaskill to reduce not only ANCs, but every tribal business, to a lower class of contract, with more hurdles than for non-Native firms. This was done via Section 811, a soon-to-be-implemented provision quietly attached to a Defense Department appropriations bill. "The additional steps required will make the contracting process difficult for a lot of tribes. At Ho-Chunk, Inc., some negotiations are already in jeopardy," said Morgan.

He felt the Post got one thing right: Some non-Native executives hired by unsophisticated local people have bilked ANCs. "Holy cow! White guys took advantage of Native people! Hasn't that happened a million times? Why aren't they being punished instead of all of us?"

Now, McCaskill is rolling out legislation that will go further for ANCs and Native Hawaiian Organizations, taking them down to the level of individually owned small firms, with 8(a) sole-source contracts capped at a few million dollars annually. With razor-thin profit margins on these contracts, sometimes as low as 2%, this is likely to stall nascent economies. Some communities are desperately poor, and some are emerging from poverty, but all are responsible for employing, housing, and educating their members. Morgan said he would not be surprised if the bill's final language also included Continental-48 tribes or if they were the subject of yet another bill.

Other senators are lining up against McCaskill, including Mark Begich (D.-Alaska), who's vowed to fight her "tooth and nail," said his press secretary Julie Hasquet. Begich has joined Senator Dan Inouye (D.-Hawaii) in requesting a hearing on the subject before the Senate's Indian Affairs Committee.

Anyone who's curious about the Washington Post's involvement in ginning up resentment over tribal contracting might recall that the cash-strapped newspaper is not shy about playing footsie with power brokers. Last year, it caused a furor when it attempted to charge $25,000 for participation in dinners (or a discounted $250,000 for 11 dinners) at publisher Katherine Weymouth's home. Had the events not been canceled, payees would have met Post reporters and influential guests in an "intimate" setting in order to "alter the debate."

The tempting power brokers in the tribal-contracting debate include members of the Senate Armed Services Committee and their contributors, such as Boeing, the nation's second-largest sole-source contractor, with $20 billion in federal business annually. In return for this largess, Boeing does give back, in recent years shelling out billions in fines to settle allegations it gave U.S. arms information to the Chinese, falsified invoices, practiced employment discrimination, and damaged the environment via radioactive and toxic waste, according to the Project for Government Oversight. Boeing, which does business in Missouri, also donates to McCaskill, who is high on its contributor list.

According to Morgan, Section 811 has dealt a blow to not only existing Native businesses. Additional tribes had hoped to use federal contracting to diversify gaming-dependent economies, he said, but are now concerned that they will be locked out.

Senator McCaskill's alternative -- direct payments -- runs counter to federal policy supporting tribal self-determination since the 1960s, said attorney Blaine Green, head of law firm Pillsbury Winthrop Shaw Pittman's Native American practice. "What generally lies behind such proposals, which have also been made to curb tribal gaming, is other entities' fear of tribes' emerging power. When politicians enter the process, they typically say Native organizations are not doing right by their people, so let's intervene. They then offer solutions that may be enough for tribal members to survive on, but not enough to promote strong Native American governments and tribal self-sufficiency." 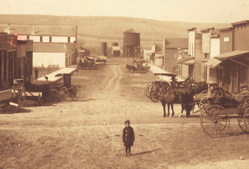 He pointed to precedents for McCaskill and WaPo's "Indian fighting" campaign. "We are the only ethnic group in America to be routinely punished as a group. In my great-grandparents' day [shown right], settlers would get mad at Indians and form a posse for a so-called punishment expedition. They would ride through the nearest Indian village, shooting anyone they saw -- man, woman, or child. How is this different?"