The New Jim Crow: Mass Incarceration in the Age of Colorblindness illustrates the shocking scope of mass incarceration in the United States that has resulted from the "War on Drugs" -- and the disproportionate and devastating impact this has had on low-income people, particularly African-American males. 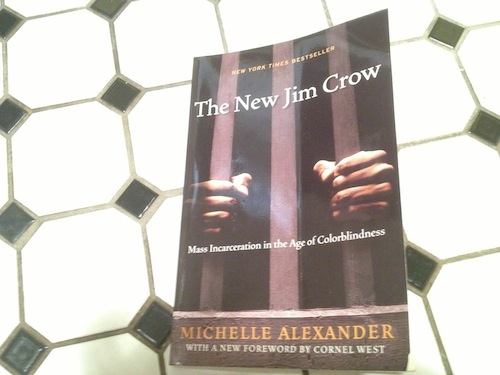 Author and legal scholar Michelle Alexander argues masterfully that the drug war has created a new racial caste system, one perhaps subtler but as pernicious as that of earlier generations, which has permanently crippled the ability of low-income black men to vote, get jobs, marry, and essentially do anything but spend a significant portion of their lives in steel boxes.

Alexander reviews American racial history from the colonies to the Clinton administration, convincingly tracing its transformation into a war on drugs that has led to mass incarceration. She explains cogently that former inmates will be discriminated against, legally, for the rest of their lives, denied employment, housing, education, and public benefits. This, she argues, is the new Jim Crow.

The statistics Alexander cites are beyond belief and painful to face. But face them we must if we intend to fix this problem and prevent it from happening again. Here are some examples of what she has uncovered:

Advertisement
With courage and skill, Alexander, a professor of law at Stanford University, lays out these and other horrors of the harshly punitive drug war laws. These laws have not addressed the national health issue of drug abuse but instead have created a lucrative prison system that preys predominately on our young men of color.

These policies have imprisoned over one million young men and saddled them with felony convictions, while provided badly paying jobs to over 700,000 prison employees, whose livelihoods are now dependent on these harsh drug laws. We have almost destroyed a generation of minority young people and many are still in prison today.

Michelle Alexander argues that "we have not ended racial caste in America; we have merely redesigned it." By targeting black men through the "War on Drugs," she argues, the criminal justice system functions as a contemporary system of racial control -- relegating millions to a permanent second-class status.

Having volunteered in the prison system for 25 years and cofounded, with Joe Robinson, the program Inmates, Teaching Entrepreneurship and Mentoring (ITEM), I respect Ms. Alexander very much for bringing this situation to light. I have three insights that may help increase the strength of her arguments.

1. Bring entrepreneurship education to our prisons and low-income neighborhoods.

Many young men imprisoned under the drug war are would-be entrepreneurs trying to make money as small business people. They are selling illegal products like crack cocaine and heroin but they are, indeed, selling and many times show a gift for markets! In my 32 years of experience as a teacher and the founder of The Network for Teaching Entrepreneurship (NFTE), which, since 1987, brings entrepreneurship education to at-risk youth, I can testify that entrepreneurship comes naturally to many low-income youth. They are looking for business opportunities to make money and behave entrepreneurially. Unfortunately, what they find on the streets are opportunities to sell drugs.

These young men -- as well as many young women -- are eager to enter to participate in our economy as entrepreneurs and owners. They are desperate for knowledge of small business. Let's provide it for them!

As the founder of an entrepreneurship program for low-income youth, I have received dozens of letters a month from prisoners for the last 20 years, all asking for advice on how to start a business. Let's teach them how and give them opportunities to remove felony convictions that hinder them from working, voting, and raising capital.

In my opinion, this would do as much to help revitalize our low-income neighborhoods as reform of the draconian drug laws.

In The New Jim Crow, Alexander only briefly mentions decriminalization. I believe we, as a nation, need to take a serious look at whether we should decriminalize nonviolent drug offenses, particularly by drug users, and provide treatment instead of incarceration. I would have liked Alexander to provide a more aggressive and in-depth argument for reclassifying the nation's drug abuse issue as a health problem and not a criminal one.

At the beginning of her book, Alexander says her only purpose is to generate conversation around the issue of criminal justice reform. She has been successful in this effort and deserves tremendous recognition for achieving this. She brilliantly makes her point on institutionalized racism and the laws that disproportionately effect people of color.

I hope that we can add entrepreneurship education and drug decriminalization to the national debate her book is sure to stir. Teaching young people how to participate in the free market should be a key goal of all schools. The major civil rights battles of today are being fought in markets over ownership of the means of production and we should encourage this, equalizing the playing field so everyone has the intellectual property necessary to view themselves entrepreneurially and compete in our capitalistic system as both workers and owners.

Let's help our low-income entrepreneurs in prisons and marginalized neighborhoods compete and become business owners. Doing so will destroy the racial caste system once and for all and transform our nation.

You are a real hero, Ms. Alexander.