Two days after the largest occupation site of Hong Kong's Umbrella Movement was cleared by police and two days before the last one was returned to "normalcy", a yellow banner appeared on a mountain in Kowloon called Lion Rock. It bore the by now familiar image of an umbrella and the words "CY Step Down", referring to Hong Kong's Beijing-backed Chief Executive, Leung Chun-ying.

For supporters of the most significant pro-democracy movement in Hong Kong's history, it provided a brief uplifting moment. Many were reeling from disappointment that the 75-day occupation of the city's main administrative district in Admiralty had ended without moving any closer to the goal of fair and direct elections for the territory's leader in 2017.

In what has become a pattern, the banner was quickly removed. The pattern was established after a group of 14 climbers carried a 28 metre long yellow banner and 60 metres of rope to the top of Lion Rock on the morning of October 23, three and a half weeks after the occupation started. 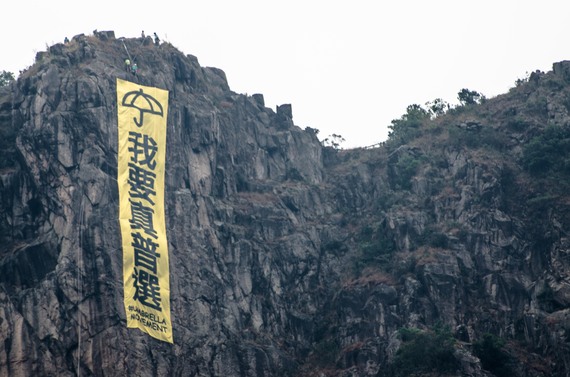 Banner with "I want real universal suffrage" on Lion Rock

Lion Rock is a 495 metre high hill whose shape reminds people of a crouching lion. The climbers unfurled the cloth banner and attached it to lion's head. On it were five Chinese characters, " 我要真普選" ("I want real universal suffrage"). Above the slogan was the image of an umbrella and below it, "#Umbrella Movement". 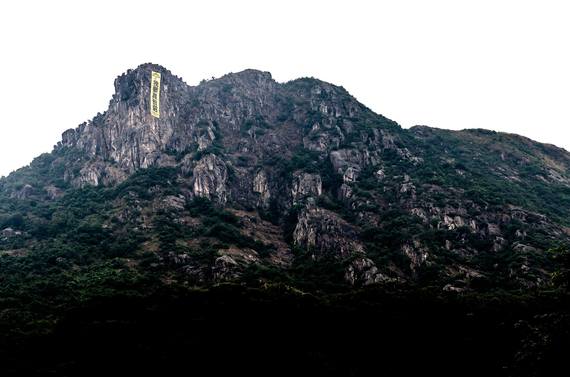 Reaction was instant and overwhelming. Images of the banner on the hill spread like wildfire on social media. Soon, hikers were making their way to see it for themselves.

The climbers, who called themselves Hong Kong Spidie in a video explaining their actions, knew it would create a stir; they knew Lion Rock holds a special place in Hongkongers' hearts and minds. But even they were taken aback by scale and intensity of the response.

The government was also aware of the symbolism, and ordered in a helicopter and firefighters to remove it the next day.

Lion Rock's iconic status derives from Below Lion Rock a television series produced by Hong Kong's public broadcaster Radio Television Hong Kong. The show ran for four series in the 1970s and 1990s. Each episode was a stand-alone drama shot in social-realist style that told stories about the grassroots people who lived in the public housing estates and squatter huts in the working-class communities directly below Lion Rock.

The dramas captured the reality of everyday life for ordinary Hongkongers, many of whom were people or the children of people who had sought refuge in the colony from war and persecution in mainland China. The programmes helped to create the sense of a Hong Kong that was based on their experiences and the values embodied in the series.

Most Hongkongers, regardless of whether or not they have seen the programmes, are familiar with the Hong Kong that is portrayed in them -- a community of hard-working, self-reliant people, who help each other out in adversity and whose goal is to build a more stable and prosperous future. In this version of the Hong Kong dream, that goal can be achieved through hard work and opportunity falls to those who are best prepared to grab them.

My colleague Professor Eric Ma Kit-wai, who is an expert on Hong Kong identity and popular culture says the symbolism of the banner on Lion Rock is emotionally charged and works on many levels.

"It was using something Hongkongers are very familiar with, an icon, and it subverted it without seeming to subvert it. It both reinforced the legacy and changed it into something relevant to today."

Last year, Ma conducted research with the materials in the RTHK archive and found the original proposal for the series. What he discovered was that while the series is now remembered as a touchstone for the formation of a distinct Hong Kong identity, it was originally conceived as a vehicle for promoting colonial government policies.

The stories in the early episodes conveyed messages such as trusting the police force, the Clean Hong Kong campaign, the problems faced by unmarried mothers, and the dangers of illegal abortion and drugs.

By the late 1970s, as a generation emerged that was born and raised in Hong Kong and the city entered its golden age of popular culture, the tone of the series also changed. It became more "cutting edge" in both style and content, addressing social issues and becoming a sort of training ground for future Hong Kong filmmakers. It had also produced an unofficial Hong Kong anthem in its theme song of the same name.

In 2002, the then Financial Secretary, former banker Anthony Leung Kam-chung wrapped up a maiden budget speech full of gloomy economic forecasts by reciting the lyrics of the song.

It was almost like the incantation of a sacred verse and set off a wave of nostalgia. Government and business leaders appealed to the Lion Rock spirit to pull Hong Kong out of hard economic times. In so doing, it was appropriating the vision of a Hong Kong built on the honest sweat and tears of grassroots, working-class Hong Kong.

But in the hands of the establishment and by 2002, the vision rang hollow, as it does today. Social mobility has stagnated, property prices spiral ever upwards, pushing up the cost of living and gap between rich and poor continues to grow.

When I meet Andreas, the young man wearing the ill-fitting Spiderman outfit in the Hong Kong Spidie video and who took part in the action, he tells me that as a teenager who supported social movements, he was sick of being told to live up to the Lion Rock spirit.

"They told me young people like myself didn't work hard enough, only knew how to demand benefits from society," said Andreas. "They emphasize hard work, perseverance, sacrifice and mutual help but they don't acknowledge the systematic and structural problems."

Andreas says the group consciously set out to reframe the idea of Lion Rock when they hung up the banner. Under the new Lion Rock, Hong Kong would no longer be a place to put down roots and make a living; instead, it would be "a place that is already home, a home that we care about and want to change."

And the change is not just about economic concerns. Andreas says Hong Kong people have finally realized that our political system has everything to do with our daily life. He connects the lack of a freely and directly elected leader and legislature with the wealth gap and policies that favor the rich.

That is not to say Andreas sees no merit at all in the old Lion Rock spirit. "We don't need to throw it all away," he says. "The values like hard work and mutual help are good but we need to build on them, to add a system that protects the disadvantaged and a level playing-ground that ensures fair rewards for that hard work. What we need is a new kind of justice."

The other message Hong Kong Spidie wanted to convey is that everyone can participate in the Umbrella Movement by contributing in whatever way they can. Andreas and his associates happened to be hikers and rock-climbers. Others can speak out using other means, and in other locations.

In fact, one of the main motivations for hanging the banner on Lion Rock was to spread the message of the Umbrella Movement outside of the occupied areas. This explains why Andreas was not much bothered when the banner was removed. "We can find Lion Rocks everywhere, each of us can even be a Lion Rock," he says.

Indeed, yellow banners have appeared all over the territory, hung up or stuck onto walkways and street railings, in country parks and in schools and other public buildings. And they have appeared around the world - from London to Machu Picchu to the base camp on Mount Everest. 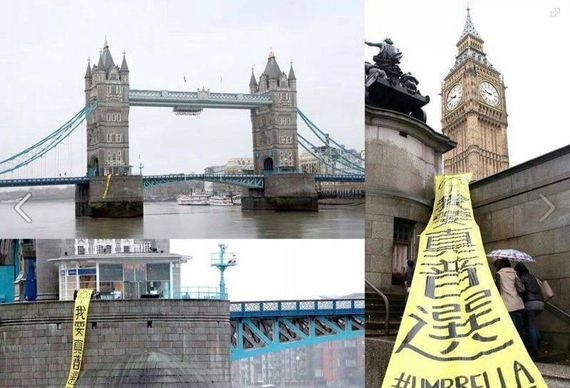 Mostly, they are replicas of the original Lion Rock banner with its simple "I want real universal suffrage" message and plain design, although sometimes there are variations in the wording. They are always taken down soon after they are discovered.

The occupy phase of the Umbrella Movement may be over for now, but the banners are likely to keep appearing. Wherever they turn up, their power derives from the original banner on Lion Rock.

Eric Ma says the Lion Rock ethos has been deconstructed and reconstructed in a way that is both striking and subtle. "Usually, sub-cultural symbols are very provocative and oppositional. This one is not."

On the day after the last occupy holdout was cleared, a yellow banner appeared on Tai Ping Shan, also known as Victoria Peak, the highest point on Hong Kong island. On it were four characters that can be translated as "don't forget the original goal".

The message was a fitting tribute to both the actions of the original Lion Rock climbers and to the Umbrella Movement itself. By going back to the beginning, Hongkongers have rediscovered the power of the Lion Rock legend. By transforming it, they moved it into a new era, gave it new life. In the difficult days ahead, Hong Kong will need to draw on the new Lion Rock spirit.