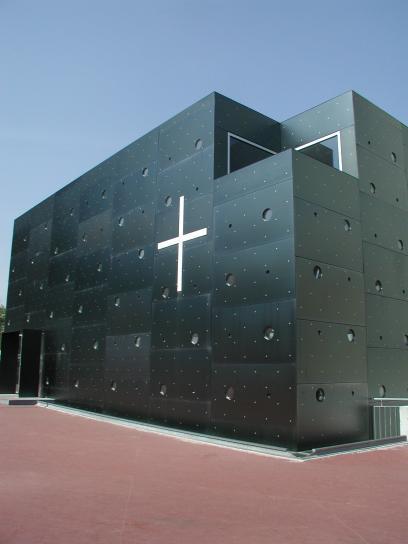 I was in a positively ebullient mood as I went off to Christmas Mass at St. Mary's with my family in tow. The senses were amped up for the big production: stained glass, plainsong, frankincense and myrrh -- the works. A procession of children marched in neat rows up to the altar to light candles and stage the manger and with the precision of a marching band exited stage left ... who knows maybe to go on some exotic pilgrimage. It's happened before. (Kids are always part of the pageantry partially because we traditionally have so many of them.) The statues of saints, false idols to the uninitiated, looked down upon the faithful like acrobats from Cirque du Soleil about to spring onto a trapeze with a spinning ninja move. The company was in rare form and the sensual passion play, real theatre, had brought the house of God to its feet.

And that's when "it" happened. You know that moment in West Side Story where the Sharks and Jets are going to rumble and everyone sings "Tonight" in orchestrated counterpoint. That's the rhythm of the Mass. You know the longest running show on Broadway -- everyone knows the words and sings along. But someone blew their lines. I believe it all started with the priest, or was it the Vatican, I'm not really sure. All I know is that is that in an instant the synchronized syllables became a mush of puffery as the congregation struggled to make sense of the whole mess. You see, through decades of interminable Saturday's at Catechism we were all indoctrinated in the sacred language and rituals of the church. Altar boys like me were even fluent in the irregular Latin and dazzling medieval choreography. At least the priest faces the assembly now. It's not like they changed the lyrics to "Edelweiss" at a midnight showing of the Sound of Music. Prayers aren't just words. They are the way we talk with God. That's the brand promise of the universal church -- like McDonald's, it's the same everywhere. You can attend Mass in an overcrowded parking lot in China where services are in Cantonese and not miss a beat -- I've done it. All together now -- stand, kneel, cross yourself and repeat after me.

So Mass is now new and improved but not necessarily the good kind. It's more like Michael Bolton's foppish cover of "Georgia on My Mind" (Senator, you're no Ray Charles) or maybe the introduction of New Coke (Young man, you will drink it and like it). Yes, that's it -- the New Mass as New Coke.

Catholics aren't good at rebellion. We are after all a people under authority and our faith informs every aspect of our life. I know what it's like to be a non-conformist. I grew in Dutch Reformed western Michigan with a propitious Netherlander name. When teachers and friends alike learned that I belonged to the old church they assumed that something had gone terribly wrong. (Remind me to tell you about the time my tall blonde Hollander girlfriend broke up with me because I belonged to a "cult.") Just to keep the record straight -- yes, we are Christians -- and obnoxiously like to remind all detractors that Peter's church is the only one actually mentioned in the Bible.

In a recent article by former Maryland lieutenant governor Kathleen Kennedy Townsend in The Atlantic entitled "Out of Step with the Flock," she remarks, "As a woman and a lifelong Catholic, I sometimes marvel that faith can flourish despite the hierarchy's not infrequent disdain for the faithful." In this case she is specially addressing the treatment of women in regards to issues such as birth control but the sentiment can be aptly applied here more generally as well. Not surprisingly, there have been reprisals on Catholic.net and the like with same message -- God doesn't answer to popular opinion. Sadly, these rebuttals miss the point entirely. The Church doesn't belong to the Vatican, Cardinals or Bishops. It belongs to the faithful who are capable of interpreting the tenants of their faith for themselves. In short, we didn't ask for this change to the Mass and from all indicators didn't want it.

Pope John XXIII believed in his people. He convened the Second Vatican Council with representatives from all over the world and all points of view to give the church back to its laity. Funny thing is that when you trust your people they have a tendency to return the favor. I wonder if the current administration got that memo. Apparently we were not invited to the secret meeting of the Latin Club in the Domus Sanctae Marthæ. "Consubstantial" -- really? That's the best you could do?

So now a simple neighborly blessing "and also with you" becomes a mystical incantation -- "and with your spirit." A humble request -- "Father, accept this offering" becomes a job for Noah Webster -- "Therefore, Lord, we pray: graciously accept this oblation of our service" -- oblation. Even Shakespeare didn't say oblation. Apparently the high flown language and symbolism of the Mass wasn't complicated enough.

Supposedly this was all done in the name of authenticity. If that were true, why not embrace the Jesus Seminar, a group of over one hundred of the world's foremost biblical scholars who have identified inaccuracies in the liturgy? Why not go back to the original language of the Bible -- Hebrew and Greek? Why not reconcile with the Eastern Orthodox Church which also has a legitimate claim as the original denomination? Some Jesuit scholars are now questioning if this new translation is indeed more accurate, but no matter, they are usually ignored and frequently excommunicated for their clever use of facts and their crazy powers of reason. Language is alive and updated with the times to be relevant to our lives -- like our beliefs. But these innovations move forward to keep up with us and our emerging needs -- not backwards to imagined halcyon days.

My church has some significant challenges these days. I guess if your religion is 2,000 years old and one out of every five people on the planet belongs to it there are bound to be some "management" issues. I propose that we "improve" the way we lead first and work on the letter of the law later.

I never liked New Coke, so I didn't buy it. I just kept drinking the regular brew. Similarly, I suggest that we say our prayers in our own voice. If that's the old way, great, or if you are feeling particularly creative maybe you make up your own words - just like the big shots do. Or we can just leave the translating to God.

Jeff DeGraff is a Professor of Management and Organizations at the Ross School of Business at the University of Michigan. To learn more about his book Innovation You and PBS Special by the same name, visit his web site at www.innovationyou.com or follow his blog on innovation at Jeffdegraff.com.