Money. Too much of it. Not enough of it. Up and down and all around in the current economy, money buys happiness and beauty; it also causes despair and destruction. Nelson Mandela once said that money would not "create success," but that the "freedom to make it will."

For several artists in the new avant-garde, however, the freedom to make things out of money might ring more true when it comes to success. Long overlooked for its aesthetic principles, these days, money is not just a physical or abstract means by which people obtain art and, thus beauty; it has become an objet d'art. The street artist Banksy may have captured the hype and irony behind the overpriced, ostentatious art market in his film Exit Through the Gift Shop, but until now, no artist -- or artistic exhibition -- has directly commented on the role of money in both American art and life by using it as the medium itself.

Made of 81,895 pieces cut from 1,121 U.S. Dollar bills, Mark Wagner's "Give Me Liberty or Give Me Death" -- a 17-by-six-foot decoupage homage to the Statue of Liberty -- directly answers the question of what Americans can create with their money. Originally commissioned in a larger format for an unnamed heiress, "Give Me Liberty" -- a smaller version at Chelsea's Pavel Zoubok Gallery through August 13 -- weaves in mythic, historical and metaphoric narratives about America using nothing but glue and every centimeter of a dollar bill.

To Wagner, anything more is superfluous.

"The dollar bill the is the most ubiquitous piece of paper in the United States. We handle it and use it every day, but we don't stop and look at it every day," said Wagner. "Everyone worries about money, everyone has issues with money -- it's a better representation of America and Americana than even the flag.

"There's a lot wrapped up in that little piece of paper." 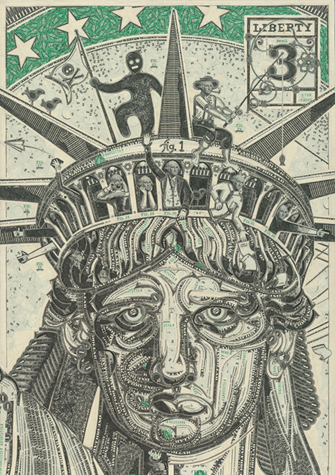 Wagner's display isn't the only act to draw in spectators with the almighty dollar, though at $1,300, his might be the most economical. Across and uptown, the Guggenheim is currently showcasing Hans Peter-Feldmann's "$100,000" a literal exhibition of 100,000 $1 bills lining the walls of its tower gallery. The idea arose from Feldmann's award of the $100,000 Biennial Hugo Boss prize for his contribution to the contemporary art world.

According to Guggenheim curator Katherine Brinson, Feldmann's "$100,000" reminds gallery-goers that dollar bills, like artworks, have no inherent worth beyond what society invests in them. However, the piece, she added, is actually less about the symbolism of capitalist excess than it is about the mass-produced image.

To Wagner, whose work also resides in the Museum of Modern Art, The Walker Art Center, the Library of Congress and the Smithsonian, both play a factor.

"I always think of my mother when I start on a piece. She's at one end of the spectrum, having only set foot in three museums in her life. Therefore, I'm going to make work that appeals to her and the layman, which, on a very direct level, is well-designed and pretty," Wagner said. "But I also want to appeal to people trained in the art world -- the people who have a deep knowledge about different things and who know the larger context of the world and the bill itself."

A printmaker by trade, Wagner grew up in rural Wisconsin, the last of 13 children. Both his training and his upbringing have given the 39-year-old Brooklyn artist, writer and co-founder of the Booklyn Artists Alliance, a Greenpoint-based artists' coalition, a unique insight into both his medium and the craft.

"The dollar bill is a ripe material: intaglio printed on sturdy linen stock, covered in decorative filigree, and steeped in symbolism and concept -- it's the only bill that hasn't been altered in the past 15 years to meet the new standard of counterfeit-proof," said Wagner, who canvases Chase banks and favored bodegas for especially fresh and crispy dollar bills. "Collage then asks the question, what might be done to make it something else? Blade and glue transform it -- reproducing the effects of tapestries, paints, engravings, mosaics and computers -- striving for something bizarre, beautiful, or unbelievable ... the foreign in the familiar."

The foreign and the familiar within the reach and context of the American dollar, for Wagner, include not only the Statue of Liberty, but also a portrait of Fed chairman Ben Bernanke, a recreation of "American Gothic" by Grant Wood and various mixed-media collaborations that hit on the necktie, real estate development and the American worker. In whatever media he uses -- whether cigarette packages, magazines or other ephemera -- Wagner tends toward meticulous assembly and fantastical, occasional surreal, presentation. 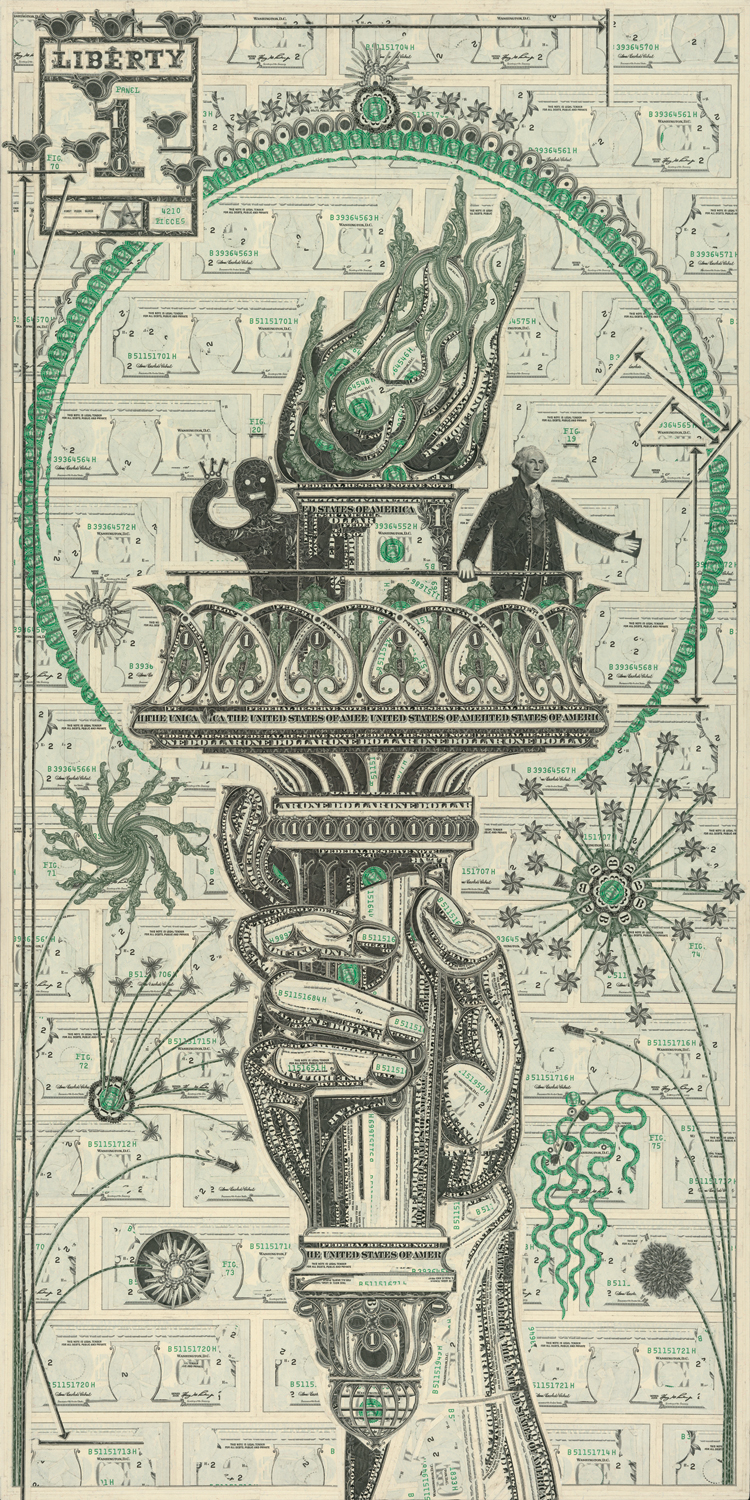 "I have a very workman approach to it -- maybe a blue collar approach," he said. "I will start cutting bills into strips, bend them twist them, and make them into things one at a time while discovering one pattern, then another, then other textures until I build up the power of possible things. Kind of like money itself."

Give Me Liberty from Adrian Brune on Vimeo.