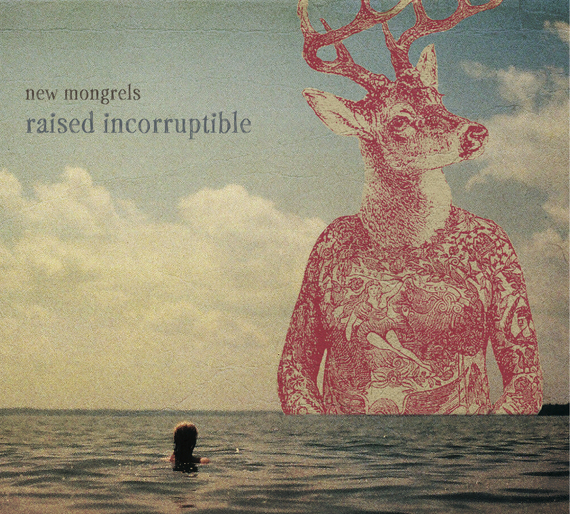 The New Mongrels, a collective musical society, have a long history that goes back to the Civil War. As the story goes, a soldier named Henry Brooke who came back from the bloody war shell-shocked and deaf in one ear had an idea. The plan was to promote joy through song that unified all creatures -- men, women, as well as dogs. This might sound a bit quirky, but in 1866, Henry was granted a charter by Smythe County, Virginia and the members set out drinking and singing promoting the moral code of their founder intermittently until the early 1940s. Okay, so this was a long time ago, but what about now? It so happens that Henry's great-great grandson, Haynes Brooke decided to resurrect the collective energy and creative spirit of the organization established by his kin roughly 150 years ago.

Using the original by-laws from the 1866 Smythe County charter, Haynes set out to invite like-minded musicians to join this collective endeavor with him at the helm as coordinator at least on this latest effort. The trick was to keep its members committed and connected. With the help of technology, the New Mongrels have managed to draw-in an array of musicians from around the states with a focus on community, celebration and spontaneity. And although one must be invited into the organization, membership doesn't mean giving up solo work. Their current sound is folk; albeit, the group's goal is to remain diverse. After all, just like mongrels, music is a crossbreed. There are no strict performance standards, but Haynes recognizes that new blood is the best way to keep the sound aligned with the 21st century.

At present, the 13-member ensemble has put a new album together, Raised Incorruptible, which includes 14 tracks that deal with the interplay between the inevitable downfalls in life followed by heaven-sent upswings. Haynes is the songwriter/producer on this effort, but he admits that coordinating the motley of talent involved in this project would have seemed a bit unruly without the flexibility of Kubilay Uner as co-producer.

Although long, the vocal layering and multi-instrumental arrangements on this album show off the member's musicianship and scope of influences. Overall the tracks might trigger off a dash of déjà-vu since the soundscape can be linked to folk artists of the '60s and '70s like Crosby, Stills, Nash and Young as well as some Joni Mitchell or Joan Baez.

Raised Incorruptible starts off with the folksy, sweet voice of a female lead singer, complemented by violin, acoustic guitar and drums as she reminds us that we can't hold on to time. The track that follows "Love It Madly" opens with acoustic guitar and violin before the spiritual voice of Haynes comes in. Voice layering adds texture to this track before it tapers into some impressive horns. This song particularly touches the heart with its minimalistic message of the loving spirit we all have. But it's the next track "Raised Incorruptible" that makes this album shine with its abstract biblical impression which is spiritually awakening.

Another highlight on this album is the Dylan-esque track "Freedom" written as an ode to Haynes' late friend Thor Hesla who died in Afghanistan. This song is mournful in a celebratory way and reminds us of the group's initial mission seeded about 150 years ago -- the joyful promotion, through song and rhythmic utterance, of a unified moral code for all creatures.

Unfortunately, Raised Incorruptible was a little too ambitious. Past the mid-point of this album, the tracks begin to lose their spunk and ends with a very short instrumental piece that feels like an afterthought. Perhaps, if they had invited in more creatures, the momentum would have kept flowing in a joyful and unified way.

You can stream The New Mongrel's Raised Incorruptible on Soundcloud and BandCamp.