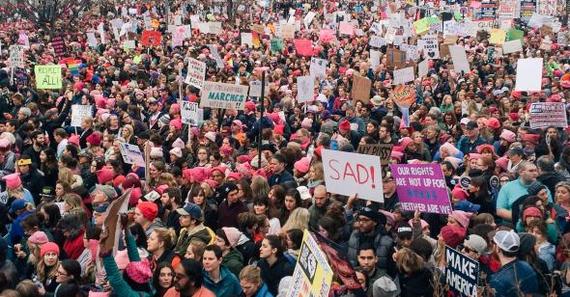 There's a novel I read, One Second After, about a high energy EMP (electro magnetic pulse) missile fired above the US by a country with which we were at war. EMPs kill no one directly. Instead, they cause all electronic activity to cease. In other words, computers stop computing, cars stop moving, cells stop working, and what we know as civilization comes to a grinding halt. The message of that book was intended as a wake up call to readers to be vigilant, to be resourceful, and above all else, to be armed. I had a lot of issues with the book, most notably its notion that a gun-toting, militaristic, us vs them view of the world is what will save us from the dark forces that lay beyond.

We are now in our own form of EMP attack. Our computers and cell phones still work, and our cars still run. No shots have been fired. No one has been incarcerated. The EMP is that we have elected to the highest office in this country someone would seek to disrupt, through a constant barrage of misinformation, conflicting statements, outright fabrication, and an onslaught of accusations against mainstream journalism, the normal electrical activity of our brains. It's a form of brainwashing, plain and simple.

The day after the inauguration, I, along with half a million others, marched in DC. We were joined by well over 600 other marches in countries around the world. Both the numbers of people involved, as well as the positive emotional energy being expended, was mind-boggling. Many marchers came from cities holding their own marches. But they took trains, planes and automobiles in order to march here, in the nation's capital. They stayed at hotels, in the homes of family and friends and people who simply opened their doors to marchers. Many others left their homes before dawn, came to DC, then left after the march was over in order to get back home.

There were countless signs, held by marchers. Some were clever beyond belief. Some induced laugh-out-loud reaction. Some were thought-provoking. But the one sign that will stay with me forever is "I used to accept the things I could not change. Now, I will change the things I cannot accept."

For me, if this march is to mean anything at all , it will be the words on that sign. My hope is that we, as a country, have woken up. We no longer trust that our votes will result in electing the best candidate. We no longer trust that our government will do the right thing. We have come to realize that we, alone, will keep our government functioning in the best interest of all of us. For that, like the book One Second After, we have to be vigilant, and we have to be resourceful. And, above all, we have to continue to use our voices.

A reader of my blog sent me a forward from an organization called Jewish Women Together. There was nothing religious in the message, or nothing that would be of interest solely to Jewish women. Instead, it was information to members about how, exactly, to do what that sign said, to change the things we cannot accept.

While I'm showing the entire message here, the heart of the message is as follows: Make your voice heard. Call (not write) your senator and your congressman. Tell him or her exactly what you think about a bill, an action being taken by the administration, or a person being considered for a cabinet position.
Here is the message:

Start with the power of our own voice,

Because as we have learned from every study -political, marketing, psychology - the biggest effect on how people come to decisions is when they hear from someone they know.
Not just consumers and voters - but also elected officials -react to what they think people want.
And now technology gives us the chance to extend our reach: Person to person, or on Facebook (or Instagram, Snapchat, Twitter, etc)

To connect with as many people as we can reach with message that is both persuasive and informative - and short.

Not with political jargon but VALUES:

We speak not as political insiders or pundits -but as concerned Americans, Jewish women, parents and grandparents-

Our concerns are what's best for our country, for our children and grandchildren
Examples:

I strongly oppose Sen. Session to be Attorney General: a man who voted against the Violence Against Women Act, against the Equal Pay Act, against the Hate Crimes Bill, and actively opposed every effort to protect voting rights - that right which is fundamental to our democracy.

I do not believe a man with this record is qualified to be Attorney General of US. I'm proud to join leaders like John Lewis and Corey Booker in opposing him.

When asked about continuing contraceptive coverage, he said:

'Bring me one woman who has been left behind. Bring me one. There's not one.'

But Congressman Price does care about his own economics: he traded more than $300,000 in health care stock while chairman of the House health committee and introduced legislation that could benefit such companies.

I oppose Cong Price for Secretary of HHS - based on his own testimony. He tells us he is determined to repeal Affordable Care Act but refuses to tell us how to replace it or what will happen to children with pre-existing conditions.

He doesn't care about repealing provisions for birth control because he knows that women can afford it; but when it comes to his own budget, he traded more than $300, 000 worth of health stock while introducing legislation to help health care companies."

Has a consistent record of hostility to public education - worked to move public funds into private schools, including religious schools;

Is ignorant about basic federal law, such as equal rights for disabled students;

And when asked about guns in schools, cited the danger from "grizzly bears." I don't know of any school children killed by grizzly bears in the US but I know the children of Sandy Hook and too many others were killed by too many guns.

I oppose Betsy DeVos because I believe our Secretary of Education should be committed to the best interests of all our children; to the public education system that educates most of them; and the civil rights laws that ensure every child has equal chance.

Betsy DeVos fails every test.
*****
The day after is now over. As we move toward each day that follows, it will be with a renewed commitment to exercise our rights in this democracy that we hold so dear. Hear our voices, Mr President. No amount of your bluster or your own version of the "truth" will drown us out. We are here today, and the day after, and the day after that, and....