There's a good early scene in Dreams from my Father, the memoir Barack Obama wrote before he ever held public office, that reflects on the man, and the politician, he'll become.

It's the late 1970s and he's attending Occidental College in southern California and still trying to figure out who he is and where he fits in and if he even wants to fit in. He's choosing his friends carefully. He switches from "Barry" to "Barack." He tries to prove he's blacker than he feels by calling an absent acquaintance named Tim, who wears argyle sweaters and talks like Beaver Cleaver, "Tom," but Marcus, another friend, catches him in a double lie: "the lie I had told about Tim," Obama writes, "and the lie I was telling about myself." 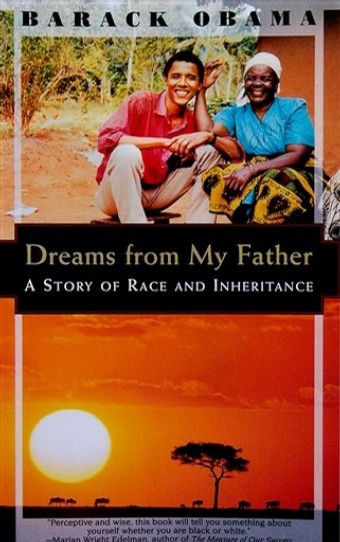 He also gets involved in a bit of political theater at a divestment-from-South-Africa rally. He's supposed to begin talking, draw a crowd, then get pulled from the stage to dramatize the situation there. Except, by this time in his life, he's noticed that "people had begun to listen to my opinions," so he's pumped and hopeful and begins his speech this way:

"There's a struggle going on. It's happening an ocean away. But it's a struggle that touches each and every one of us. Whether we know it or not. Whether we want it or not. A struggle that demands we choose sides. Not between black and white. Not between rich and poor. No--it's a harder choice than that. It's a choice between dignity and servitude. Between fairness and injustice..."

It's working. He's drawing them in. Thus when he's pulled from the stage he doesn't want to go, and afterwards he's bitter that the spotlight went elsewhere. At a party that evening, his friend, Regina, who also spoke at the rally, congratulates him on the speech, but he's dismissive and says: "That's the last time you will ever hear another speech out of me." He continues to talk apathetically until Regina pokes him in the chest:

"You wanna know what your real problem is? You always think everything's about you... Well, let me tell you something, Mr. Obama. It's not just about you. It's never just about you. It's about people who need your help. Children who are depending on you. They're not interested in your irony or your sophistication or your ego getting bruised. And neither am I."

This is a book that echoes. Barack's father, in a letter to his 10-year-old son, tells him, "Like water finding its level, you will find a career that suits you." The stories his mother and maternal grandparents tell him reflect, he says, that brief, Kennedy-era spirit of a "seeming triumph of universalism over parochialism and narrow-mindedness." Obama's half-sister, Auma, talking of their father, mentions that the old man may have had political ambitions but colleagues "who had been more politically astute" rose ahead of him.

But nothing echoes more than Regina's line. It became one of the major themes of Obama's 2008 campaign. "What the naysayers don't understand is that this election has never been about me," he said during his acceptance speech at the Democratic National Convention in Denver. "It's been about you."

The line also echoes within the book. It's a seminal moment and the author repeats it several times. In fact, the longer he writes, the less the book is about him -- who he wants or imagines or needs himself to be -- and becomes about the people he meets as a community organizer in Chicago and while visiting relatives in Kenya: their problems and needs and wants. At times our first-person narrator becomes almost a third-person narrator, and, because it's Barack, and because we want clues as to who he is and what he thinks, it can be frustrating. We want more about him and he keeps giving us more about them. But it's a brilliant construction. Regina's line is absorbed into the life and into the book, which is about the life.

He only met his father once. That surprised me. When he was 10, his father visits Hawaii for a month or two, and he's forced to deal with the man rather than the myth. His father is skinnier than he imagined, and there's something foreign about him, and the young Barack is mortified when his father is scheduled to give a speech to his class -- sure that his father will embarrass him, and the lies he's told his schoolmates, about his father being a prince, will be exposed. Instead, when the old man's through, there's applause and looks of awe. "You've got a very impressive father," one teacher tells him. Even here we get echoes. Even here we get narrative distance. Instead of telling us how he feels about this incident, he focuses on the other black student in class, Coretta, a girl he once pushed because others teased him about being her boyfriend. "She seemed too intent to smile," he writes; "her face showed only a look of simple satisfaction."

The memoir drives home what's singular about Barack's experience: He was not defined by who raised him. Most of us are. He was raised by a white mother, and white grandparents, in Hawaii and Indonesia and Hawaii again, and yet the world saw him as African-American. Even his father, had he been around, wouldn't have helped much, since he was African, not African-American. Some people, in fact, may compare Barack's experience to that of a first-generation American, but most first-generation Americans get clues, and indoctrination, from their peers. He didn't have peers. There's no steady African-American voice until Ray comes along in high school. "I was trying to raise myself to be a black man in America," Obama writes, "and beyond the given of my appearance, no one around me seemed to know exactly what that meant."

Does this lack of knowledge help him in the long run? In Chicago, he has this exchange with Kyle, a black teenager who wants to be an Air Force pilot but gives up because "the air force would never let a black man fly a plane":

I looked at him crossly. "Who told you that mess?"
Kyle shrugged. "Don't need somebody to tell me that. Just is, that's all."
"Man, that's the wrong attitude. You can do whatever you want if you're willing to work for it."
Kyle smirked... "Yeah, well...how many black pilots do you know?"

For all the moments of stark realization in Barack's life -- the Life magazine photos of the black man who tried to peel off his skin; hearing his grandmother's fears of black strangers; seeing in his mother's wistful gaze, during a showing of Black Orpheus, not only her unreflective innocence about black people but perhaps her very reason for marrying his father and thus his very reason for being -- he never has the weight of "Just is, that's all" on him. That sense of being trapped. That sense of never being allowed to overcome what you are. He wasn't inside trying to get out, he was outside trying to get in. "Wandering through Altgeld or other tough neighborhoods," he writes, "my fears were always internal: the old fears of not belonging."

If its author hadn't given that speech at the 2004 Democratic Convention, I'm sure this book, as good as it is, would have faded. "Books find a grave as deep as any," John Updike once wrote. Now it'll be required reading in almost any school around the world. It is, like the man himself, unprecedented. What recent president has given us such a document: a memoir from his early days, obviously written by him, just as obviously written well, with a journalist's eye for detail and a novelist's ear for dialogue?

Regina was right: It is about the people who need his help -- billions now, instead of hundreds or dozens. But there's irony in this. The more a man makes it about others, the more indispensable he becomes...and the more it becomes about him, after all.