Open an Indian newspaper these days, and these are the stories you are likely to find. Out of these stories, our collective consciousness is built, which affects what we believe and how and why we choose to act. As we try to weave ourselves into this story as change agents, we end up writing ourselves out of it, as we feel helpless up against this land of seemingly endless problems.

For the last two weeks, I've been on the Jagriti Yatra (meaning journey of awakening), an 8,000-kilometer journey across India with 450 fellow yatris, or travelers, on a physical, social, and spiritual journey. We visited all kinds of organizations -- from multinational titans, like Infosys, to grassroots organizations, like the Barefoot College -- all of which are connected by the common goal of building India. 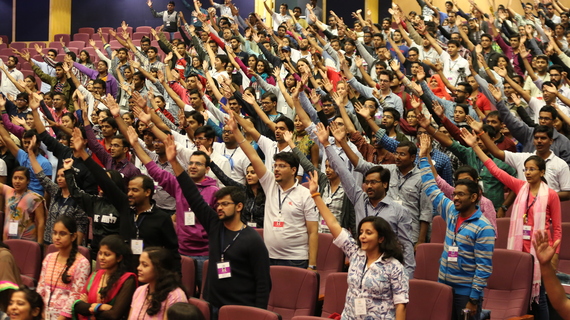 (Photo of yatris by Pradnyesh Molak)

Between visiting role models like those mentioned above and continuous serendipitous conversations with 450 strangers from across the nation and globe, all of whom are driven to do something, a new collective consciousness and story emerges -- both of the self and of the country.

At the individual level, pre-Jagriti Yatra, few yatris had been given the time or space to speak so openly about their vision and dreams. Jagriti Yatra provides a platform, and more importantly, the permission to yatris to pursue their entrepreneurial dreams.

The result? A non-stop conversation of new ideas and innovations. For example, on just the third day of the yatra on a bus ride back from a field visit, a group of yatris were inspired by a mentor and hatched an idea for a solar-powered, wifi-enabled bus for teaching children computer in rural areas. They are in the process of taking the idea forward now.

At the national level, yatris heard a new story as well, as we heard from people like Bunker Roy, who has been engaged in the nation building project at the grassroots level for the last 40 years. Bunker Roy thought differently -- that there is a difference between being literate and educated, and many illiterate people have skills and abilities that can build our communities. He acted on this assumption by teaching illiterate grandmothers from rural areas to become engineers, who, in turn, are now solar electrifying their villages.

Finally, the yatra itself inspires a feeling of promise for the future; once the seeming impossibility of housing and feeding, let alone inspiring, 450 plus people across 13 destinations and 8,000 kilometers is completed, we all started to feel that anything is possible with the right dedication and mindset. Out of this physical, social, and spiritual yatra, a new collective consciousness arises: we are not just a nation of poverty, but also of possibility; not just challenges, but also change; not only setbacks, but also solutions.

For the next chapter, I'd bet on these 450 yatris to do such transformational work that the headlines will be forced to change to tell a new story of building, creation, and change.