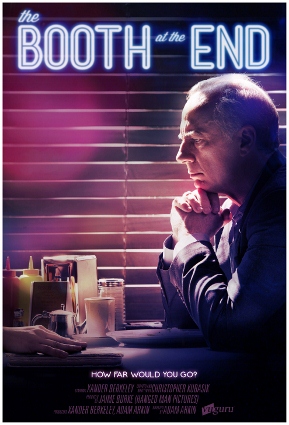 (Booth can be seen here for free, only on Hulu.com. New episode released today, August 6 with a new episode out on Hulu for the next four successive Mondays.)

There's nobody who reads my columns who doesn't know what a huge supporter I am of the Internet-phenomenon series Booth at the End. Now (right now!!) you can see the first episode of the long-awaited second season of Booth on Hulu.

With all the writing and directorial brilliance of Rod Serling's Twilight Zone, the years have been unkind to that brand. Now, Booth fills an important Twilight Zone-shaped hole in viewers' minds.

With the on-boarding of Adam Arkin as Director of this second season, the always ominous, somewhat creepy and frequently back-of-the-neck hair-raising, writing masterpiece of an Internet/TV series, Booth has been irrefutably put on the map.

They have built it ... now, you the viewers must come.

I challenge you to try watching--just five minutes--of this show. If you do, you will be instantly and irretrievably hooked. (Recommendation: watch the first five 22-minute episodes from Season 1 on Hulu in order to get the full effect of characters, plot and story-line.)

Booth mastermind, Christopher "C. K." Kubasik took his fascination with the offbeat, quirky and macabre writing style of Rod Serling and the "kitchen sink realism" writing of Paddy Chayefsky to create Booth out of thin air--and his wonderfully vivid, fertile imagination. One wonders what else dark and foreboding is lurking in this man's mind; something scarier than Booth perhaps?

No less than Michael Eisner sure hopes so. Eisner's company, Vuguru bought Booth from C. K. and produced the scintillating first season of five, 22-minute 'webisodes.' As Eisner has been quoted as saying about Vuguru, "The entire concept here is 'content is king.' What will drive traffic is interest in the subject matter."

And masterful, omniscient and omnipresent Xander Berkeley's portrayal of our hero/villain/mystic character, "The Man" is, as always, there for our eager digestion. The Man is the traffic cop of story-lines here--he's in charge--but there's always the question lurking in the viewers' minds: Who's behind The Man? What's the deal?

And the there's The Book. We get a much closer look at it in this second series; this holder of all truth and tasks which must be performed in order for The Man's "clients" (for lack of a better term for these poor souls) to get what they ultimately want in their lives. It is a well-worn, scuffed and tattered leather book which after The Man, seems to be in total and complete control of where and what lengths these people go to get what they want. It seems to be constantly processing and coordinating its tasks between different clients so that what one finds out about themselves and life in general might be tied-in or polar opposite to what another learns. "Be careful what you wish for" indeed.

"I hear the pastrami sandwich is really good here," is the code phrase that must be uttered in order for the man to pay attention like some kind of Mob code or Ali Baba's "Open Sesame," the pastrami sandwich signals The Man it's safe. If you know the words, it will result in The Man taking copious notes on your situation or quandry and asking, "Tell me more about that." If you don't know the words, The Man will hardly look up from his newspaper except to mumble, "We've got nothing to talk about kid." This has not changed in Season 2.

While some things remain the same, others change. The Man and The Book are sacrosanct. But The Diner where Booth takes place is not. Out is the superb, Art Deco splendor and campiness of "Cadillac Jack's," the pink-stuccoed, neon-lit home of The Man and his booth from the first series. In is the new home for Booth ... a somewhat seedier, Skid Row-type diner on the corner underneath what would seem to be a SRO lodging house for the down-and-out set.

Favorite Character Alert: Also mercifully remaining from Booth's first season is "Doris," played promisingly by Jenni Blong. She's the waitress who would seem to have had to overhear The Man and his nefarious negotiations as she made her rounds at "Cadillac Jack's." During the first episodes, Doris seems smitten by The Man and he by her; she's steamy and sultry and he, well, he's all alone. But Doris is dangerous to The Man as this new season proves. She follows him to his new diner hideout and presumably will either fall into bed with him or cause him untold difficulties--or both. 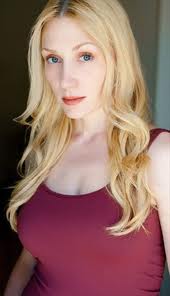 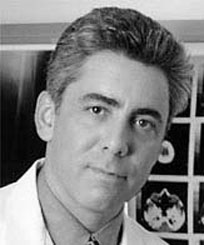 "I was immediately entranced by Booth," Arkin said, "and its new media format. The storytelling components are so clear with the story taking place mainly between two characters in only one location--never moving outside--and the process of doing it, my directing of it, almost becomes a meditation." Yes, I can see that Mr. Arkin, as I've been entranced and achieved a funny sense of Zen calm when watching Booth too.

This is not Arkin's first turn behind the camera instead of in front of it. "I had directed some sporadic episodes of "Justified" (FX), "Grey's Anatomy" (ABC) and "Sons of Anarchy" (FX), Arkin recalled sounding very much like a man who enjoyed this Booth opportunity to direct all episodes of something. 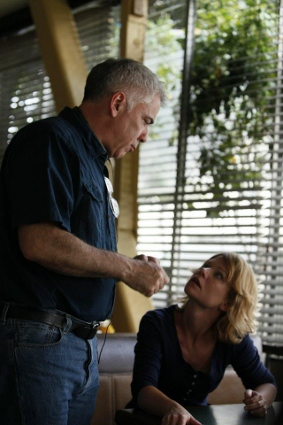 Director Arkin on the Booth set

"The thing about directing a new media show like Booth; a program with a different web format is that you can follow your own instincts and jump into things," Arkin reflected excitedly. "With the traditional TV industry, there are tons of committees, long decision times and you can't get a clear sense of what the finished product will look like and when. In the smaller, more independent and more nimble world of the Internet web-series world it's very liberating, very encouraging and a greater evolution can result because you see the finished product faster."

According to all the key players, shooting Booth's second season was a very good time. C. K. Kubasik said, "It was a fantastic time working on the shoot. Adam Arkin assembled simply wonderful actors for the new characters, and the Xander, Jenni Blong and Jenny del Rosario delivered above and beyond with the reprisal of their roles. Expectations were higher this time, around and I can safely say that the commitment, passion and care from everyone involved was something to behold."

Larry Tanz is the CEO of Vuguru. "This program is beautifully written, beautifully acted and is really a beautiful piece of work," he told me recently, "it's a multi-platform, multi-territory, multi-season series. After making this second set of episodes, there's an increased enthusiasm to make us say, 'let's make this a hit!'"

Booth has had all the earmarks of a hit to me since I watched the first 30 seconds of the first episode. As I encouraged C. K., Xander and Tanz to make a second series, I had in mind what this program could be; what it could mean to TV and Internet watching--which has for the last few decades been an annoying puzzle not solved: the blending of traditional TV with the Internet for consumer households.

Regarding the prospects for a Booth Season 3, Tanz concluded, "I would love to have a Season 3 launch by next summer."

Rod Serling would be turning over in his grave.