Seven years ago, Cambridge University Press courageously published The New White Nationalism in America: Its Challenge to Integration (2002). Identified in the introduction (p.2) are seven conditions that I believe threaten to fuel a disruptive racial consciousness movement among White Americans that could have dangerous consequences for race relations.

Unlike my first book, Black Faces, Black Interests: The Representation of African Americans in Congress (Harvard Press, 1993, 1995, and University Press of America, 2007), it received no prizes or accolades from fellow academicians who dismissed the book as apocalyptic sensationalism.

I confess that The New White Nationalism was written after I had had a profound religious conversion experience that changed my worldview bringing about a profound sense of urgency. Given the recent murder at the Holocaust Museum and the raging debates about who or what is responsible for what seems to be an increasingly violent anti-Jewish, anti-minority climate, I am compelled to share with readers an excerpt from the concluding chapter of the New White Nationalism in America.

If anything, the conditions I identified back in the early 2000s have taken on an increasing urgency. The conditions are ripe, I believe, for unprecedented levels of racial conflict and racial turmoil.

As I stated in my book, there is hope for a better future. The New White Nationalism was written as a warning and a wake-up call for Americans who cherish the civil rights vision of an integrated America, a common humanity, and equality before God and law. Below is an excerpt from the most important book I have ever written: 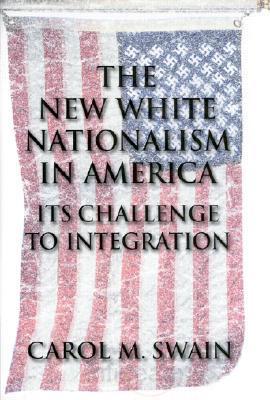 And the Lord answered me and said, Write the vision, and make it plain upon tables, that he may run who readeth it. For the vision is yet for an appointed time, but at the end it will speak, and not lie: though it tarry, wait for it; because it will surely come, it will not tarry.

"We in America, I believe, are increasingly at risk of large-scale racial conflict unprecedented in our nation's history that is being driven by the simultaneous convergence of a host of powerful social forces. These forces include changing demographics, the continued existence of racial preference policies, the rising expectations of ethnic minorities, the continued existence of liberal immigration policies, growing concerns about job losses associated with globalization, fear of minority crime, the demands for multiculturalism, and the Internet's ability to enable like-minded individuals to identify each other and to share mutual concerns and strategies for impacting the political system. This combination of factors, in addition to others mentioned in Chapter 1, contributes to a social dynamic that can only serve to nourish white racial consciousness and white nationalism--the next logical stage for identity politics in America. There now exists an emerging white interest that is parallel with, and structurally akin to, a black and brown interest, which increasingly sees itself in need of protection from public and private initiatives that are said to favor minorities at the expense of more deserving whites.

Moreover, it is not only whites who are angry or feel resentful or threatened. A part of the future discord will come from the rising expectations and demands of racial and ethnic minorities, which are sure to increase as minorities become a larger portion of the American population.

The ominous tone of this book may come as a surprise to those familiar with my past research. For more than a decade I have been an unapologetic optimist on race relations who has watched with great satisfaction as my once controversial ideas on racial redistricting and racial representation - criticized by some as wishful thinking -- have become widely accepted across the political spectrum. Actually, there is no contradiction - or abrupt change -- between my previous position on race relations and the views I present here. I still believe that the majority of white Americans are morally good people who do not hate members of other races or ethnicities. But the same non-quantifiable intuitions about human behavior that led me almost ten years ago to argue the optimistic claim that black politicians can represent white voters, that white voters will support suitable black candidates, and that white politicians can effectively represent black voting interests now compel me to offer a cautious warning of the potentially dangerous waters ahead that threaten our common goal of an integrated and harmonious American society.

Insights drawn from my day-to-day interactions with Americans of different races and social classes have combined with my research and personal experiences to lead me to the conclusion that it will be very difficult sailing ahead for race relations in America. New challenges present themselves which must be faced squarely if the optimistic vision for the future of America's race relations is ever to be realized.

This final chapter consists of two distinct sets of recommendations. The first set is aimed at the improvement of American society overall and the creation of greater opportunities for disadvantaged and politically powerless citizens. The policy recommendations that I make here were developed to help address lingering inequalities in American society and to help spur a vigorous debate on issues of race, ethnicity, and public policy. Some of these recommendations, I know, will be dismissed by white conservatives as partaking of the same style of Great Society social activism that allegedly failed so miserably in the past. To such critics I can only say that not all forms of policy activism are doomed to failure and that we must try to do more in the future to help the most "truly disadvantaged" members of our society, especially when their continued distress threatens the peace and repose of the entire country.

The second set of recommendations is aimed specifically at African-American leaders and intellectuals because I believe that they have a pivotal role to play if we are to avoid more serious racial strife in the future. Some of these recommendations may be controversial, and some blacks may criticize me for washing dirty linen in public. But I believe that the issues I raise here need a public airing, and that too many black leaders seem reluctant to acknowledge some of the very real problems that currently plague black communities, not all of which can be blamed on continuing white racism."

Carol M. Swain is a Professor of Political Science and Professor of Law at Vanderbilt University. A highly sought after political analyst and frequent commentator on race relations, immigration, black leadership, and evangelical politics, Swain is also an accomplished author of several popular books including her most recent book "Debating Immigration" (Cambridge University Press, 2007). You can follow Carol M. Swain on Twitter @CMSwain