As you nurse your NYE hangover on January 1st, you'll probably start thinking about what you want to do differently in 2014. At this point, it's hard not to roll your eyes at the clichéd and extremely high expectations we set for ourselves each year when we make our resolutions. Before even starting your list, make another list -- the list of resolutions you made for 2013. How many of them did you actually finish? Better yet, how many of them did you even start? Be honest with yourself -- after buying the Groupon for kickboxing how many classes did you actually attend of it? (Is it still sitting in your account with the ghost of Groupons' past?) This year, instead of making a list of things I hope to accomplish in 2014, I'm going to try a little reverse psychology on myself and make a list of New Year's Resolutions I won't be making this year.

I make this (stupid) resolution every year. It will last for about two weeks until I realize that I am a much nicer and happier person with chocolate in my life. Instead, I'm going to just monitor my chocolate intake. i.e.: after a tough day at the office, have one or two Hershey's kisses instead of 12.

Another resolution I usually keep for three weeks of the new year. I genuinely do enjoy going to the gym, but when I overload myself and exhaust myself, I get turned off to it. I will however, try to go to the gym five days a week. That way I have a couple of days to myself each week and don't get burnt out before February.

I HATE this resolution -- why is it on so many people's lists? Who cares if I can write in script?

Stress is part of life. When you're balancing work, family and friends, stress is inevitable. I don't know where we got the idea that we could just completely eliminate stress from our diet. Instead, I'm going to channel my stress in a more meaningful way. Maybe instead of taking my stress out on the people I love, I'll kill two resolutions with one stone and sweat it out on the treadmill.

I'd like to and I'm going to try, but chances are it isn't going to happen. If I kept all my New Year's weight resolutions, I'd be the size of a Barbie doll by now... I'm going to set realistic weight goals for myself this year -- i.e. "I'd like to get back into my favorite jeans from college." At least that's (somewhat) more reasonable.

Believe me I'd like to have more patience, but it's not wired in my DNA. I'm a Type A personality -- we aren't meant to wait around. I will try to give people the benefit of the doubt and when I don't have patience, I'll try not to take my impatience out on the wrong people.

Sorry... I have too many events coming up in 2014 without a plus one for this one to be a remote possibility.

In 2014, I will still...Take the Little Things for Granted

This is a tough one because it's a resolution I'd like more than anything to keep, and maybe I will for a while. But honestly, it's impossible not to take every little thing for granted. Holding hands with someone you love, brown paper packages tied up with strings, the cold side of the pillow -- there are so many wonderful little things and my resolution is to try and stop and appreciate them every once in a while, but more importantly -- just be thankful that I'm lucky enough to take such blessings for granted. 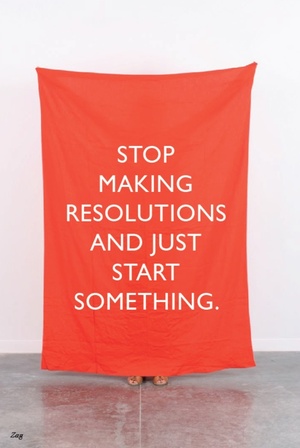