The world champion Magnus Carlsen is making chess popular around the globe and his title defense against Vishy Anand begins on November 8 in Sochi, Russia. Millions of chess fans are looking forward to the coverage of the World Chess Championship match on the Internet and in the newspapers. Alas, The New York Times chess column will not be one of them. Last month, it was abruptly terminated with a single sentence: "This is the final chess column to run in The New York Times."

At least the Washington Post was more generous. After they decided to stop my chess column in January 2010, I was able to write the last article as a farewell note, expressing what the column tried to accomplish. But make no mistake about it: every time a newspaper cuts a chess column, chess loses.

In 1972 America went chess crazy. Bobby Fischer played the Match of the Century against Boris Spassky and chess was everywhere. The New York Times hired grandmaster Robert Byrne to run the chess column. 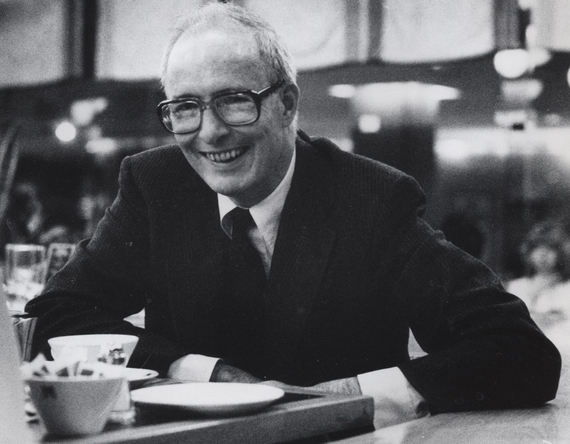 On October 10, they devoted almost a full page to chess with three items. The first began with...

BYRNE IS APPOINTED AS CHESS COLUMNIST

Robert Byrne, a United States chess co-champion, has been appointed chess columnist for The New York Times. He replaces Al Horwitz, who has been on a leave of absence.

A 44-year-old grandmaster, Mr. Byrne has won the United States Open Chess Championship three times - in 1960, 1963 and 1966. He shares the title of current co-champion with Samuel Reshevsky and Lubomir Kavalek.

It was not a mistake. We were the co-champions. The 1972 U.S. Championship was also a Zonal qualifier and only two places were available. Robert Byrne won the play-off in February 1973.

SKOPJE, Yugoslavia, Oct. 9 - The United States team lost today to the Soviet Union in the 12th round of the chess Olympics here. On the top two boards, Lubomir Kavalek drew with Tigran Petrosian and Robert Byrne drew with Vasily Smyslov. But Pal Benko lost to Mikhail Tal and Arthur Bisguier lost to Anatoly Karpov.

Karpov was actually the first reserve on the Soviet team.

The U.S. team could have been much stronger. The Coca-Cola company was willing to pay $100,000 on a condition that Fischer plays. He would get $50,000 and each of us $10,000. Bobby wanted to go to Skopje. He told me that before my departure from Reykjavik, where I was performing a double duty: reporting on the match for the Voice of America and working with Bobby on his adjournments from the Game 13 till the end of the match. But it was Fischer's adrenaline talking: he was, understandably, too tired after the match with Spassky. Larry Evans and William Lombardy also stayed home.

The third item was Byrne's first column. He wrote about my game against Florin Gheorghiu. At the 1966 Havana Olympiad, the Rumanian grandmaster defeated Bobby Fischer. Byrne based the comments on our mutual analysis before and after the game. The game was also annotated by Hans Kmoch in the Chess Life and Review and I have revisited the comments and added more recent views.

Special to The New York Times

SKOPJE, Yugoslavia, Oct. 9 -The rich stock of opening ideas Bobby Fischer and Boris Spassky came up with in their recent world championship match is the spur for dozens of encounters here in the Chess Olympics.

"Since the 15th Spassky-Fischer game (Reykjavik 1972) Lubomir Kavalek, the former Czech grandmaster now playing Board No.1 on the United States team here, has, like others, thrown enormous effort into mastering the complexities of Spassky's new attack against the Najdorf variation of the Sicilian Defense. Spassky's sharp play had broken the defense early in the game for a moral victory, although Fischer's tenacity and Spassky's later mistakes led to a draw." - R. Byrne

Gheorghiu's opening choice was not a surprise since we already played the same variation in the preliminaries. I chose 8.Bc4 but did not get much and the game was quickly drawn. 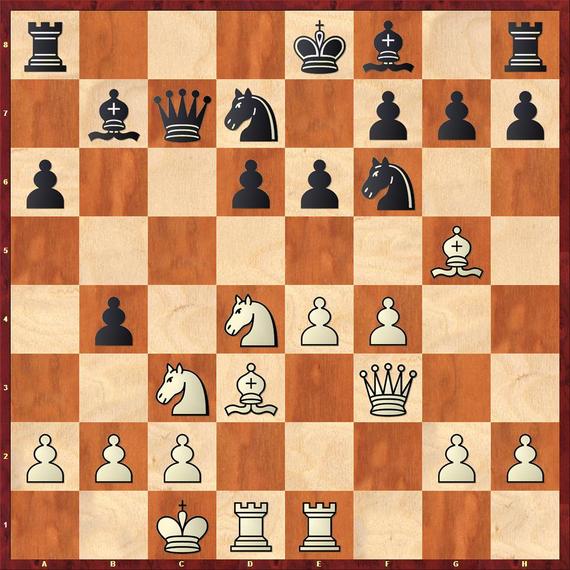 "Something more radical than Fischer's routine play was required if Black was to stay in the game. The answer had to be an early b5-b4, provoking White to attack precipitously by Nc3-d5, accepting the knight sacrifice and squirming tortuously to a won endgame.

When the match had been under way about 20 minutes I was startled to find Kavalek 13 moves deep in the Najdorf Sicilian variation that had stumped us. His opponent, Florin Gheorghiu, was following the track of our analysis, compelling the piece sacrifice by 11...b4 and further improving on Fischer's play by omitting the development of his king bishop, which otherwise would have been caught in an awkward pin on the king file.

What was wanted was a smashing justification of the knight offer. But every proposal I came up with brought only a sad,"No, Bob, no-- it's no good," from Kavalek.
That's how matters stood when the United States met Rumania last Thursday." - R. Byrne

The king walks away. This is the reason why black left his dark bishop home- on the square f8. 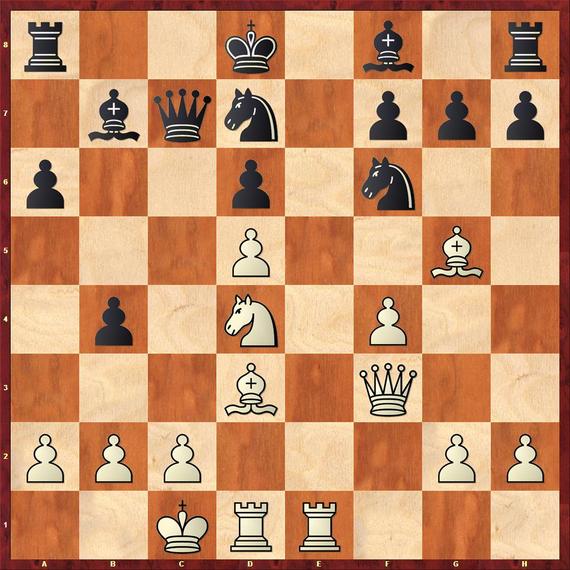 Like a drunken sailor, the light bishop is going to zig-zag its way to the pawn on f7.

Commenting for the Chess Life and Review, Hans Kmoch over enthusiastically awarded this and my next move with a double exclamation point.

Robert Byrne was more down to earth: "Kavalek had stubbornly gone in with nothing better in mind than the 14.Nc6+ Bxc6 15.dxc6 Nb6 we knew to be insufficient. His brilliant inspiration 14.Bf5 and 15.Be6 occurred to him only over the board in the 10 minutes he took on his 14th turn."

The position seems critical. There are several choices: 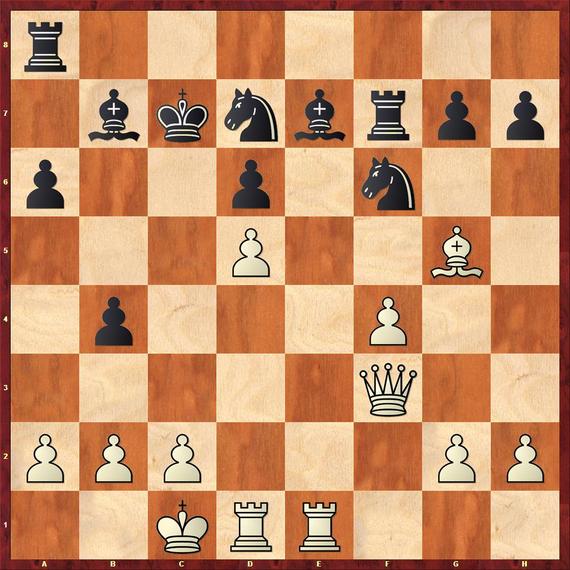 "So Gheorghiu's plan of exchanging his queen for three of the attacking minor pieces was the only one (alternative) feasible. Had he consolidated his position quickly enough, he would have been able to put up tremendous resistance. But Kavalek didn't give him the chance." - R. Byrne

"Black has three minor pieces for the Queen, but with two pawns down and his king exposed, he is in very bad shape." - Hans Kmoch

White threatens to hunt the queenside pawns or sacrifice the queen back on e7.

Planning to jump back with 25.Qb5 to clean the queenside pawns. 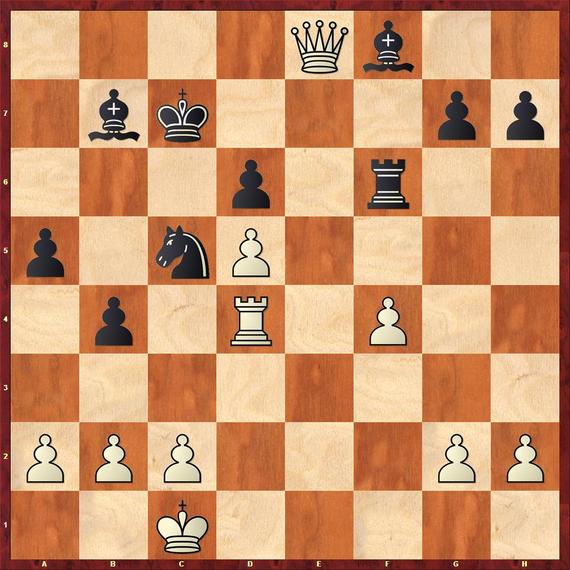 "By move 24 Gheorghiu was so tied up that he was driven to the desperate pawn sacrifice 24...g5, in vain hope that he could organize some sort of counterattack on the white king." - R. Byrne

"A hopeless bid for counterplay. White was at the point of using his kingside majority, anyhow. Now he can do it with much more immediate effect." - Hans Kmoch

At the age of 45, Byrne went on to qualify for the Candidates matches, finishing third behind Viktor Korchnoi and Karpov at the 1973 Leningrad Interzonal. Three years later at the 1976 Biel Interzonal, he missed the Candidates by a half point.

Last month, FIDE threw the 45-year-old Boris Gelfand into the lion's den, organizing two 12-player Grand Prix events close to each other. Gelfand shared first in Baku, Azerbaijan, but finished last in Tashkent, Uzbekistan. The first two GP finishers qualify for the Candidates tournament. After two tournaments the leaders are Fabiano Caruana with 230 points and Hikaru Nakamura with 207 points, both in their twenties.

In 2012, Gelfand challenged Vishy Anand for the world title. It was the oldest pair in the history of the world championships and it ended with Anand's victory in a rapid chess tiebreak. Last year Anand lost the title to Carlsen, but bounced back and against all odds won this year's Candidate tournament to meet the Norwegian again. Last time they met, Anand grew tired in the middle of the 12-game world championship match.

At 44, Anand knows he is an underdog, but this time he will be better prepared mentally and physically. He sent a clear warning to Carlsen by winning the Bilbao Masters in September. At 23, Carlsen is bursting with energy and can keep the pressure on by playing long games and cutting down on his own mistakes.

It could become an uphill struggle for Anand. It doesn't take much - two, three blunders perhaps - and the match is gone, and the ageless warrior we so much admire becomes simply too old.