NEW ORLEANS -- Last month, a senior editor with the New York Times, Don Hecker told a flood victim from New Orleans - who had lost everything 5 years ago - that he felt the Times was correct in giving all the credit for the flood devastation to a storm.

"Had there been no Hurricane Katrina, engineerrng (sic) and other decisions would not have caused the damage. So I think we are correct in attributing the cause to Katrina," wrote Mr. Hecker.

Since blaming Mother Nature is an enormous oversimplification, Levees.org initially wrote a polite little note to Mr. Hecker asking the Times to follow the recent suggestion of its ombudsman Clark Hoyt, that is, for reporters to be as specific as possible when discussing the horrific man-made flood of August 29, 2005.

After getting no response from Mr. Hecker, we launched a petition and called on our supporters and others to urge the NYTimes to resist fast and easy "Katrina shorthand."

Blaming Katrina for flooding New Orleans would be like blaming the atmosphere in Florida for the Challenger explosion. Katrina and the atmosphere merely precipitated the respective disasters. Nature was not the culprit.

And in the case of New Orleans, responsibility for the flooding lies generally with the civil engineering community and primarily with the U.S. Army Corps of Engineers.

Over 1,000 petition signatures were collected in under 48 hours, all across the nation, and during the holidays no less. We submitted the signatures, over 1,500 of them, and accompanying comments to Mr. Hecker, on January 6, 2011. We requested a response that we might share with the signers and our nearly 25,000 supporters nationwide. 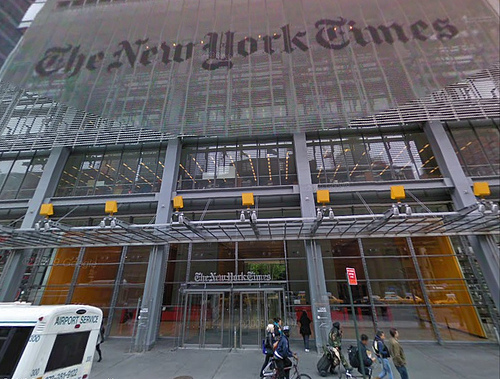 We have just received Mr. Hecker's response via snail mail. You can see it here along with the initial email exchange that prompted the fracas.

We have two points to make regarding the response.

The New York Times completely ignored the concerns of over 1,500 petition signers, many of whom suffered greatly in the disaster and all of whom feel it's just plain wrong to use a short-hand phrase like "Hurricane Katrina" to describe the flooding event. The Times simply re-stated "We feel that the language we used was sufficient for the article."

Second, the majority of the New York Times' letter was devoted to self-congratulation for its commitment to covering the flood and its effects. All that "commitment" talk sounds sadly familiar, like playing the card: "Look at all we've done for you already, you ungrateful victims!"

The self back-patting also has absolutely nothing to do with the point. It was a disingenuous spin and at a minimum, a non sequitur.

Furthermore, the Times seems to have forgotten a quote from Dr. Ray Seed, a professor of engineering at the University of California, Berkeley, and author of a stinging report about the levee failure disaster who was quoted in the New York Times.

"With the right hurricane protection, he said, the result of Hurricane Katrina would have been different: "we call it 'wet ankles.' "

We have watched in the past five years, the difficulty the media (and everyone for that matter) has in distinguishing between precipitating factors and causes. But if a condition is going to be treated successfully, this distinction is critical, not just in the New Orleans case, but in every case where the distinctions are blurred.

Before Levees.org launched its petition to the New York Times, a close advisor told me,

"Just be prepared, their arrogance knows no bounds - but go for it. I guess if nothing else, it's a moral booster for the troops, because it shows that even though we win most of the time, we still need to fight because nothing is a given."


Such editorial stubbornness by a major news outlet presents a good occasion to remember all the other media victories that surely did pan out.

After all, national media routinely invite Levees.org to comment on current and relevant events including NPR, Wall Street Journal, The Weather Channel, the Associated Press, Reuters, the BBC, PBS Newshour, CNN, and more.

"Maybe you will learn to re-enforce the levees next time. Bad, Corps of Army Engineers! Bad!"


A 2010 campaign by Levees.org to award reporters who accurately describe the 2005 flooding disaster with a "Seal of Approval' caught the attention of the New York Times which ran a story about it.

Levees.org was dubbed "an influential grassroots group" by the Associated Press.

These media successes are important because the American people need to understand that the flooding of metro New Orleans was overwhelmingly and primarily a federal responsibility.

And with each day that passes, the truth about the terrible man-made flooding spreads even more.