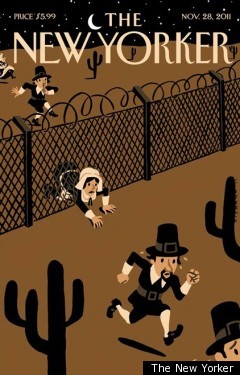 No stranger to controversial cover art, The New Yorker Thanksgiving issue depicts a gaggle of pilgrims scampering under a starry sky.

A woman crawls under a barbed-wire fence that could be the U.S.-Mexico border. Two men, sweat dripping from their hats, sprint across the barren landscape.

The illustration is entitled "Promised Land."

"American politics tend to be very practical and open-minded, so why would you consider throwing them out?" cover artist Christoph Niemann told Huffington Post LatinoVoices, referring to the popular view on undocumented immigrants. "The debate should be about how can a country benefit from immigration. America depends on immigration. The discussion will be more valuable if it is focused on benefits".

Niemann, an illustrator, animator and graphic designer, is a German native and legal U.S. resident.

"I'm an immigrant myself and what I always found staggering is that there are tons of Europeans who get green cards and I know some of them are not legal from the get-go and that never comes up," he said. "Having a racial undertone in this debate is extremely hurtful. It shouldn't have anything to do with where the immigrant comes from."

The artist said a complicated issue unfortunately had been simplified for public consumption.

"Too often in politics, very complex subjects are being turned into sound bites, so it's easy to take them apart," Niemann told The New Yorker.

"I draw a parallel between current immigrants and early settlers -- the hope is that it will provide context, to help keep things in perspective."

At the Republican primary debate Tuesday night, it was again evident that the pack -- with Newt Gingrich apparently the exception -- would quickly dispense with the immigration problem by deporting the roughly 11 million undocumented immigrants in the United States.

"I don't see how ... the party that says it's the party of the family is going to adopt an immigration policy which destroys families that have been here a quarter century," Gingrich said. "And I'm prepared to take the heat for saying, let's be humane in enforcing the law without giving them citizenship but by finding a way to create legality so that they are not separated from their families."

Rep. Michele Bachmann (R-Minn.), a Tea Party favorite, countered with another politically-charged code word in the delicate immigration debate, the A-word itself: Amnesty.

The Dream Act, parts of which Gingrich has praised, would allow some young people who came to the United States without documentation to qualify for citizenship.

"Now, Newt Gingrich might have a huge problem because he said we must take into consideration families that have been here for over 25 years," Niemann said. "I'm not a Gingrich fan but to think that among all his flaws and insanities, what will keep him down is having a more humane view on immigration, I find this insane."

He added, "I wish this whole debate would be a lot more sober and careful. These are people and it's about their aspirations."

It would have been nice to ask the GOP candidates about The New Yorker's thought-provoking Thanksgiving cover, the latest in a long tradition.

In 1993, a Valentine's cover by Art Spiegelman showed a Hasidic man kissing a black woman.

Another Spiegelman cartoon caused a stir in 1999. His cover llustration depicted a portly white cop in a shooting gallery taking aim at civilian targets. A sign said: "41 shots 10 cents." An obvious reference to the police shooting death of Amadou Diallo, an unarmed African immigrant in the Bronx, the cover was denounced by the mayor, the governor and 250 police officers protested outside the magazine's offices.

Now, "Promised Land" is certain to resonate on both sides of the immigration debate. It suggests that the pilgrims, like many immigrants now, arrived uninvited. They prospered through perseverance and hard work, like many newcomers today.

In fact, studies from liberal and conservative research groups have found that members of the 1990s wave of immigration are successfully integrating into American life. They also tend to be more assimilated than counterparts in other countries.

A new report from the Center for American Progress, a nonpartisan think tank, concluded that integration patterns dispelled the popular notion that Hispanic immigrants were not assimilating. The study tracked immigrants that arrived in the 1990s. Only 25.5 percent of them owned homes in 2000. By 2030, 70.3 are expected to be homeowners. Ruben Rumbaut, a sociologist at the University of California, Irvine, who studies criminal immigration trends, said new arrivals to the nation are not violent.

"Immigrants are associated with much lower rates of crime and incarceration," he said. "And some of the safest cities are those with large immigrant populations."

"Everybody's ancestors were immigrants," Niemann said. "The idea of immigration is celebrated every year in the U.S."

And on the eve of that holiday tradition started by immigrants, the latest allegorical cover from The New Yorker is quite fitting.

Niemann said, "Cartoonists, not politicians, should be the ones who condense political discussions into simple images."