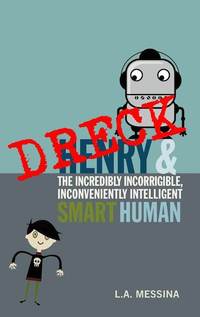 Full disclosure: The New Yorker called my writing dreck. It did not level the slight directly at me but lobbed it wholesale at the self-publishing community of which I'm a member. Here's the actual quote: "The digital market is awash with millions of barely edited titles, most of it dreck, while readers are being conditioned to think that books are worth as little as a sandwich." It was in an article examining Amazon's business practices, some of which are deplorable, such as its warehouse conditions, and while the teaser promised a thoughtful consideration of the self-publishing industry ("Amazon is good for customers. Is it good for books?"), it delivered a cursory condemnation.

As far as insults go, dreck, with its harsh K and garbage-at-the-bottom-of-the-rubbish-pile implication, is a particularly cutting one, and I'm sure many indie authors took offense. I did not. Instead, I marveled at its audacity and longed for the day when I would be self-actualized enough to consign millions of anything to the trash heap. I sometimes fear the moment will never come.

Failing to take affront at the slur, however, is not the same as failing to take note of it. I'm a faithful reader of The New Yorker. For 18 years, I've read every issue from cover to cover with only the most highly selective curation of musical reviews and short stories. I've read through vacations and lapsed subscriptions and nursing newborns. I know The New Yorker and how it works, delving into topics I never think about and somehow relating them to the meaning of life. Six years on, I'm still talking about Nick Paumgarten's paean to the elevator.

Since I am so familiar with the magazine, I know that dreckiness is not the usual standard by which its subjects are measured. The New Yorker I read positively delights in putting commonly scorned topics front and center -- Saban Entertainment, Nora Roberts -- and explaining their relevance to the contemporary world. It doesn't judge if the product is good or bad because it's not the quality that matters but the cultural impact.

This neutrality has been particularly evident in its coverage of disruptive technologies. The New Yorker has a general pattern: Introduce an innovation, identify a few standouts, explain its influence on its industry. In October 2006, it published a thoughtful and informative piece about YouTube. Ten months after its launch, the video-sharing site had more than six million videos and 65,000 new ones were being uploaded daily. If there was any dreck in that heap -- and it seems unlikely there wasn't -- the article did not see fit to mention it.

Eight years later, its modus operandi hasn't changed. Just last month, the magazine explained Vine -- "an app of looping six-second videos" -- to non-digital natives. Just as it did for its article on YouTube, the magazine highlighted some superstars of the new medium and wrote about their experience in a straightforward, nonjudgmental way. Digital Marketing Ramblings estimates that 8,300 Vines are shared every minute, but rather than question the quality of those videos or suggest their potential degradation of filmmaking, The New Yorker chose to write flatteringly of one of Vine's most successful practitioners: "an ingenuous Frenchman with an arresting smile."

In the same way, The New Yorker was full of admiration when it reported on keitai shosetsu, serialized novels written by young Japanese women on their mobile phones and uploaded to media-sharing sites: "The medium -- unfiltered, unedited -- is revolutionary, opening the closed ranks of the literary world to anyone who owns a mobile phone."

As an indie author, I don't mind The New Yorker taking a hard stance against a form of creative expression it finds distasteful. I really, truly don't. But as a reader, I find it worrisome that the publication I rely on to explain the economic and social forces that impact the world I live in has too much contempt for a contemporary phenomenon to provide balanced coverage. In an exhaustive, 11,936-word article dissecting every aspect of Amazon's business, the magazine devoted less than 1,500 words to assuring its readers that self-publishing was indeed the end of literature they'd always feared it was. Looping six-second videos got more than 6,000 thoughtfully considered words.

I don't blame the magazine or its editors for their double standard. Few venerable print institutions have written about self-publishing with equanimity. The New York Times' coverage of Amazon's standoff with Hachette was so unbalanced, the public editor had to take its reporters to task. What I do blame the magazine for is its inability to see beyond its own concerns. For more than 14 years, The New Yorker has been covering the Internet's disruption of the music industry with remarkable insight, clarity and consistency -- from its first article on Napster, in 2000, when the music-sharing site was only nine months old, to its examination of Spotify published just two months ago.

Clearly, it's easier to report on the barbarians at someone else's gate.

Joe Nocera, writing about the Amazon-Hachette dispute for the Times in October, freely admits his stake in traditional publishing. "The old system," he writes, "in which the writer gets an advance and the publisher markets the final product -- works for me." No doubt it works for a lot of established journalists as well, and although their antipathy to change is understandable, I think they owe it to their readers to disclose it.

But what do I know? I'm just dreck.

A version of this story originally appeared on IndieReader.com on January 12.